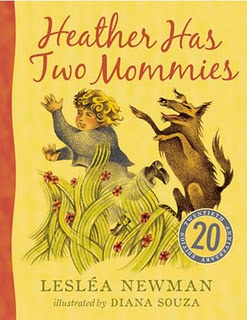 In honor of Queer History Month, I want to give a shout out to Lesléa Newman, an iconic yet under-recognized gay Jewish writer whose work continues to inform the changing landscape of GLBT rights in the U.S.

I first met Lesléa at a writing workshop sponsored by my mom’s Sisterhood group at our synagogue nearly three years ago. Bored, underemployed and living in my parents’ basement, I begrudgingly tagged along, knowing I would be the only person in attendance under 40. The workshop turned out to be fabulous, but it wasn’t until we were getting ready to leave that I saw the table overflowing with copies of Lesléa’s books and realized that she was the author of not only the groundbreaking children’s book Heather Has Two Mommies, but the celebrated short story “A Letter to Harvey Milk.” Lesléa Newman’s words and stories were a presence in my life at every stage of my development.

Newman has written more than 50 books, including children’s books, novels, poetry and short fiction. She has received a number of literary awards, and nine of her books have been Lambda Literary Award finalists. But it is not her achievements that inspire me; it is her bravery, perseverance,and dedication to exploring the intersection of her lesbian and Jewish identities in her writing.

Lesléa Newman:  I came out when I was 27, having had the realization at a party where there was an open poetry reading. I didn’t know when I first got there that all present were lesbians, but it soon became apparent to me. When I read my work, the women responded in such a deep way, I thought, “These are my people.” No one had ever understood my work like that. I identified as a lesbian from that moment on, and have never looked back! This was in 1983, and never in my wildest dreams did I think I would ever have the honor of being happily and legally married (we just celebrated our 23rd anniversary). It does get better! And better and better and better.

When did you begin writing about LGBT issues? Did you feel safe doing so?

I began writing about LGBT issues immediately. In fact, coming out opened up my writing in a whole new way. My first novel, Good Enough to Eat is about a Jewish woman who is struggling with an eating disorder. In the course of the novel, she comes out, and comes to a peaceful place with who she is in body and soul. I followed that up with A Letter to Harvey Milk, a book that contains nine short stories, each one about a different Jewish lesbian. I wanted to read a book about Jewish lesbians but I couldn’t find one, so I decided to write one. I’m not sure why I never felt afraid to write openly and honestly about LGBT issues. In a way, it’s scarier not to write about these issues. My latest book, a volume of poetry called October Mourning: A Song for Matthew Shepard (forthcoming from Candlewick Press in fall of 2012) drives home the reason we cannot be silent. If one of my books can ever convince even one person that LGBT people have the right to exist and enjoy the same basic civil rights as everyone else–including the right to feel safe in this world– I will feel that I have done my job.

Are you surprised that Heather Has Two Mommies is still one of the most frequently banned books?

Ah, Heather. She continues to do her job in the world, which is to make people think. She has been banned and burned, lauded and applauded. I don’t know that anything that happens regarding Heather would surprise me at this point. She’s been through it all! I wrote Heather so that children with two lesbian moms would see a family like theirs depicted in a picture book. The message of the book, which the teacher in the book tells the children, is, “The most important thing about a family is that all the people in it love each other.” I find it amazing that in the year 2011, this is still considered a controversial statement.

Was there any blowback from the release of your new children’s book about gay marriage, Donovan’s Big Day?

My subsequent picture books that feature two-mom or two-dad families such as the board books, Mommy, Mama, and Me and Daddy, Papa, and Me, as well as Donovan’s Big Day, have not gotten into the sticky situations that Heather has. I’m not sure why. Maybe the times, they are a-changing.

What advice do you have for aspiring GLBT writers?

The same advice I have for any writer: read as much as you can. Write every day. Remain teachable. Never give up. And specifically for LGBT writers: The world needs our stories. Our stories are everyone’s stories. Believe in yourself. Your writing is a gift to the world.