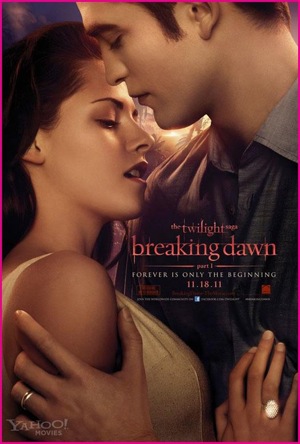 As I sat watching the vampiric ode to white weddings that dominated the opening scenes of Breaking Dawn: Part 1, I waited anxiously for the honeymoon and morning-after scenes, wondering how the latest Twilight film would present vampire Edward’s “headboard-busting” sex and his new wife Bella’s bruised body.

The highly sanitized depictions in the film, compared to the Twilight book series, removed the vast majority of Bella Swan’s “violet blotches” and her subsequent attempts to conceal them. In the book, as she gazes at herself in the mirror, she notes:

There was a faint shadow across one of my cheekbones, and my lips were a little swollen…The rest of me was decorated with patches of blue and purple. I concentrated on the bruises that would be the hardest to hide—my arms and my shoulders. … Of course, these were just developing. I’d look even worse tomorrow. [italics mine]

The movie only decorates her with a few tiny bruises on her arm and shoulder, a diminishment that can be seen as an improvement given that it does not romanticize a bruised and battered body to the same extent as the book.

But another narrative thread in Stephenie Meyer’s Twilight saga that is problematic from a feminist perspective–the latent anti-abortion message—is heightened, not diminished, in the film. While some argue that the book is pro-choice, as Bella chooses to carry out her pregnancy, the way Bella’s pregnancy is depicted and discussed–along with the strong pro-abstinence messages of the saga, the religious underpinnings and the motherhood-is-the-natural-and-happy-ending-for-all-females tone–result in a narrative that leans far more towards the anti-abortion stance.

When Bella discovers she is pregnant, 14 days after her wedding to Edward, he is horrified, telling her that Carlisle will “get that thing out.” Bella responds “That thing?” seemingly distraught at his choice of words. This attention to language continues in further scenes when the psychic vampire Alice repeatedly uses the word “fetus” and is corrected each time by her vampire sister Rosalie, “Say the word baby!…It’s just a little baby!”

Given that the film ultimately depicts the pregnancy and resulting birth as miraculous, the word “baby” is framed as more apt than the more pro-choice-preferred “fetus.” The term “miracle” and Bella’s instant transformation into a woman who will protect her pregnancy at all costs–even her own life–also echo common anti-abortion narratives.

Edward, Jacob, Alice, Carlisle and the Quileute wolves are all against Bella’s choice to carry out the pregnancy–and understandably so, given she looks like a living skeleton. The fetus, as Carlisle tells her, “isn’t compatible with your body–it’s too strong, too fast-growing.” Yet Bella never considers not carrying out the pregnancy, even though her life is clearly at risk—something that would no doubt make those who propose “egg as person” laws and “let women die” acts quite happy. The life of the fetus is framed as more important than Bella’s, a sentiment that colors these pieces of anti-abortion legislation. And Bella is portrayed as a heroic martyr, the ultimate mother-to-be, rather than as a delusional lovestruck teen with a seeming death wish.

Bella is duly punished in pregnancy and childbirth, bringing to mind Genesis 3:16: “I will greatly multiply your sorrow and your conception; In pain you shall bring forth children; Your desire shall be for your husband, and he shall rule over you.” Yet the closing birth scene is more sanitized than depicted in the the book–yes, Bella’s spine is broken, but there are no crunching bones, no sounds of the vampire-human hybrid gnawing its way out of the womb, no vomiting of blood. Instead, Bella lays prone and skeletal, looking like a very bruised, very pregnant, very dead Snow White, as Edward, Vampire Charming, bites her neck, arms and legs in hopes of turning her into a vampire before she dies. The “happy ending” is the birth of Renesmee, whom Rosalie—depicted in the books as having a ruined life because she cannot have children—happily swaddles and kisses.

If you know the saga, you know that Bella does not die–another message that her choice to carry out the pregnancy was the right one. While it’s true she makes this choice, the book and film never suggest any other choice, leaving us with an anti-abortion message seductively packaged as a true-love fairy tale. Bella is cast as a modern Snow White, whose body, shriveled and bruised like a rotting apple, is able to bloom once again thanks not only to Edward’s life-saving bites but to Renesmee’s birth.