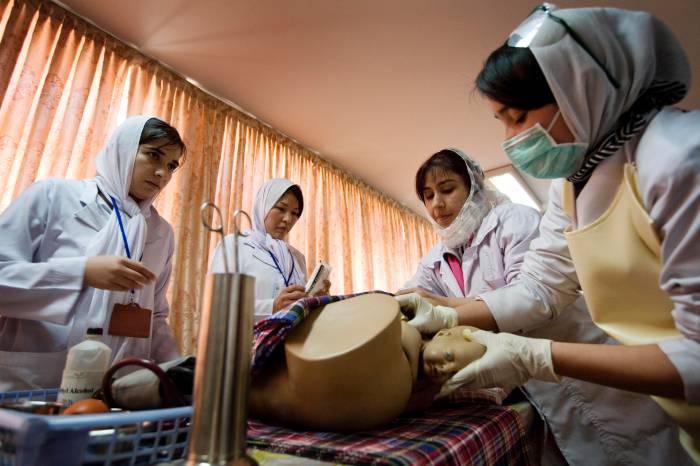 As we head into the key Bonn Conference on December 5, which will discuss the future of Afghanistan, Ms. has published in its new issue a report on progress being made for Afghan women in reducing maternal mortality and improving women’s health. It shows that when resources are devoted to Afghan women—as in the midwife training program we write about, women can improve their status. It’s crucial that the Bonn Conference not cede any ground on women’s rights and opportunities , and that can only happen if women are at the negotiating table. Our report shows the importance of earmarking resources to women’s development programs, and the central role woman are playing in rebuilding Afghanistan’s society.

In a sparse but neat classroom with plain white walls and a cement floor, a group of young Afghan women wearing crisp blue medical uniforms and dark headscarves stands at attention. They are midwives in training in central Afghanistan. Soon, they will be deployed to the front lines of the country’s fight against the world’s worst maternal-mortality statistics. It is a battle they are waging slowly, one pregnant woman at a time. But the students say they see signs of progress—and they are eager to be part of it.

“In my district the hospital is very far, sometimes five to seven hours even by car, and I know a lot of women who have died during pregnancy,” says Salima, a bright-eyed student whose headscarf hangs loosely around her face. “People are very happy the midwives are there now, because the ability of women to access prenatal care was very low, and that is why I am going to help.”

Even in Afghanistan’s cities, where distances are less daunting, a lack of basic health infrastructure and widespread poverty mean that maternal mortality and access to emergency obstetric and neonatal care remain a challenge. In 2002, after 30 years of war and the brutal Taliban regime, the country was a shambles with a broken health system. There were just 467 midwives in the entire country. One out of 7 women was likely to die in childbirth, compared with 1 out of 3,500 in the United States.

Slowly, these grim numbers are improving, but as of 2008, Afghanistan still had the highest estimated lifetime risk of maternal mortality (1 in 11, compared to 1 in 31,800 in the lowest-risk country, Greece). While most news stories focus on the dangerous lack of security for Afghan women, the reality is that women in the country are 200 times more likely to die giving birth than to be killed by a bomb or a bullet. Indeed, a recent poll of experts from the Thomson Reuters Foundation ranked Afghanistan “the most dangerous country for women” in the world, noting “sky-high maternal-mortality rates, limited access to doctors and a near total lack of economic rights.”

The trainees gathered in this classroom are part of a far-reaching effort to reverse these appalling numbers. Today, there are several maternal-health initiatives funded by, among others, the U.S. Agency for International Development (USAID), the World Bank, the United Nations and the European Union that are beginning to turn the tide on maternal mortality in Afghanistan. At the heart of these initiatives is a nationwide midwifery program that is not only improving health outcomes, but also opening up life-changing career opportunities for Afghan women, who are seizing the chance they offer. Since 2002, the number of midwifery schools in Afghanistan has increased from six to 34, serving all of the country’s 34 provinces. More than 2,500 midwives have been trained and employed by the Ministry of Public Health and NGOs in health centers across the country.

For women in the country’s most remote provinces, who face the greatest challenge accessing health care in this overwhelmingly rural country, the midwives serve as a lifeline. Of the approximately 500 birth complications that occur daily in Afghanistan, 320 happen in those rural areas. Midwives are also active in cities, making home visits to women too poor or limited in mobility to seek help at clinics or hospitals.

Along with saving mothers’ lives, the midwives serve as homegrown role models whose economic strength and earning power are changing their families’—and their communities’—views on women’s roles. Midwives can earn around $350 each month, a substantial salary in one of the world’s poorest countries and where per capita GDP is less than $500 per year. The money matters and is playing a role in shifting male attitudes toward women’s work outside the home. When women begin contributing economically to the family, they also have a greater say in what happens to them and to their children.

“Most people have a lot of respect for midwives because they need health care,” says Fatima, another student in the program. “Midwives save mothers’ lives and women’s lives.”