The Best Responses to Plan B Betrayal - Ms. Magazine
Skip to content 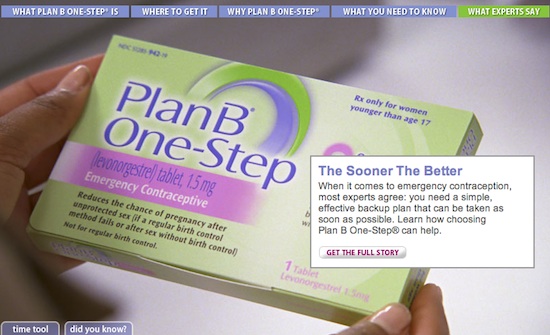 We at Ms., along with feminists nationwide, were forced to dump our celebratory Korbel down the toilet last week when HHS Secretary Kathleen Sebelius reversed the FDA’s decision to grant over-the-counter status to “morning-after” pill Plan B without an age restriction. As we reported last week, we had good reason to preliminarily pop the cork:

Countless doctors, scientists and health professionals have confirmed that Plan B does not pose a health risk. Multiple studies have shown that girls are capable of understanding the package label and using the product safely. In 2009 a federal judge even ordered the FDA to reconsider the age restrictions on the drug, calling it “political and ideological,” not scientific.

But women–and men who care about women–are not taking this lying down. (As a matter of fact, it’s a wonder the cissexuals among us are lying down for anything these days when, should we accidentally conceive, we are likely to face at least one gesture of contempt from our country–whether we seek emergency contraception, abortion services or even to breastfeed in public. But I digress.) Over at the Women’s Media Center, Adele Stan reports that women and women’s groups are both venting and mobilizing; such formidable feminists as Katha Pollitt and Jodi Jacobson have issued all-out battle cries.

Meanwhile, Feministing writes that 14 senators have expressed their displeasure and skepticism regarding the politicized decision in a letter asking Sebelius to provide the scientific evidence behind her highly-criticized move. The letter reads:

On behalf of the millions of women we represent, we want to be assured that this and future decisions affecting women’s health will be based on medical and scientific evidence.

Women must not be forced to jump unnecessary hurdles to obtain safe and effective contraception. Men and boys of all ages can obtain condoms easily, without interference from any governmental authority. Women and girls deserve equal treatment and respect, at the minimum.

And finally, according to the FMF, a judge has given a green light to the Center for Reproductive Rights to not only re-file their lawsuit against the FDA for imposing the medically and scientifically unnecessary age restriction, but also to add Sebelius as a defendant.

Here’s hoping that, with the continued outpouring of strength and dedication from fierce, capable women, Ms. can crack open some of that celebratory champagne in the very near future. (And since over-the-counter access to Plan B is predicted to bring the price down from $50 a pop, we may even be able to spring for a pricier bottle.)

Take action to help reverse this decision—click here to tell the Obama administration not to let science and medical standards be trumped by politics.