Komen and the Dangers of Corporate-Funded Causes - Ms. Magazine
Skip to content

Komen claims to be withholding funds because of new criteria barring it from providing grants to organizations that are under investigation by local, state or federal authorities. In and of itself, that is odd. What is stranger, however, is the 2011 hiring of Karen Handel–who was openly anti-Planned Parenthood–to the position of Senior Vice President of Public Policy for the organization. And, adding to an already questionable management decision, Komen put her in the position to establish their foundation’s policy.

They must have had a reason for hiring her. I can’t imagine what it was, though.

However, the organization has been confronted with anti-abortion pressure before, but not given in. So why cave now? What’s different beyond change in management?

Susan G. Komen is funded, as you probably know, through numerous relationships with consumer brand companies. Come October we are swathed in pink thanks to Komen’s partnerships with Coca Cola (its “Minute Maid Pink Lemonade”), Yoplait (“Save Lids Save Lives”) and dozens of other companies making everything from pink hand tools (who doesn’t love a powder pink power drill?) to Tory Burch puffer jackets. Their sponsors are multinational corporations who have tied in with Komen to show affinity with women—the primary purchasers of their products.

As I write in my forthcoming book, Compassion, Inc.: How Corporate America Blurs the Line Between What We Buy, Who We Are and Those We Help (University of California Press, April 2012), corporate funding of social causes via product purchases has been increasing at a disquieting rate. Called cause marketing, cause-related marketing or sometimes “corporate social responsibility,” these campaigns allow corporations to back social issues from women’s health to education to sustainability.

While these campaigns can do good, there are also considerable downsides to using the consumer marketplace to fund nonprofits. Beyond making people feel that purchasing say, a pink product, can replace a direct donation, the wider concern is the impact on the system of nonprofit funding. For example, if a campaign does not work to drive sales, the corporate sponsor can drop one non-profit for another that might be more beneficial to its bottom line. Conversely, any negative press connected to a corporation can reflect badly on the charity and hurt its donations. Perhaps most disturbing is that corporations support “female friendly” non-controversial causes like education, poverty and homelessness, and health (heart health in the form of red dresses and breast cancer in the form of pink ribbons) while eschewing controversial ones (Planned Parenthood) or ones that can’t be made visually appealing (like Alzheimer’s disease). In this instance, corporations may have become concerned about Komen’s connection to Planned Parenthood. Anti-choicers have grown increasingly savvy in using online petitions and social media to warn corporations away from reproductive-rights causes.

Thankfully, social media works both ways. You, too, can tell corporate sponsors that you will pull your business if they support Komen’s decision. You can tweet and retweet support for funding of Planned Parenthood under the hashtags #standwithPP and #occupythecure. I assure you corporate sponsors will get the message.

In the end, this snafu should be filed under “unintended consequences” because Joan Walsh of Salon.com got it right: Komen has fundamentally hurt their brand—the heart and soul of their business. This might not be a brand mistake on the magnitude of New Coke—particularly if they reverse their decision—but it isn’t too far from it given the current activity on Twitter about Komen. If they don’t reverse course, I suspect there will a whole lot fewer Yoplait lids licked next fall.

Mara Einstein has been working in or writing about the media industry for the past 20 years. She has enjoyed stints as an executive at NBC, MTV Networks, and at major advertising agencies working on such accounts as Miller Lite, Uncle Ben’s and Dole Foods. Dr. Einstein is the author a number of books, most recently Compassion, Inc.: How Corporate America blurs the line between what we buy, who we are and those we help (University of California Press, 2012). This work examines the growing trend of promoting and selling consumer products as a means to fund social causes and effective social change. It builds on her continuing research into the effects of consumerism on social and cultural institutions, ideas considered at length in her last book, Brands of faith: Marketing religion in a commercial age (Routledge, 2007), a critique of promoting religion in today’s consumer-oriented culture. Dr. Einstein has written for Newsday and Broadcasting & Cable as well as having her work appear in academic journals and edited texts. She is currently a Mellon fellow researching faith-based weight loss and fitness programs as a conduit for considering the integration of the sacred and secular in American culture. Dr. Einstein is an Associate Professor at Queens College and an independent marketing consultant. Her blog is www.compassioninc.org.

Argentina Proves the Importance of Representation and Social Activism 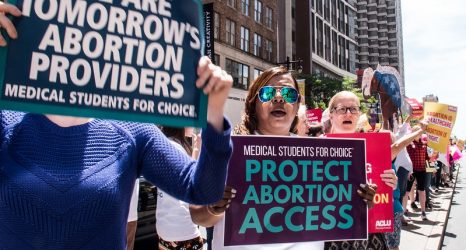 The Ms. Q&A With Ani DiFranco: “You Have License To Be All the Aspects of Yourself and To Be Unashamed of Them”
“Care is Infrastructure, Silly”: Feminists Defend Caregiving Funding in Biden’s Jobs Plan
Constitutional Rights for the “Unborn” Would Force Women to Forfeit Theirs