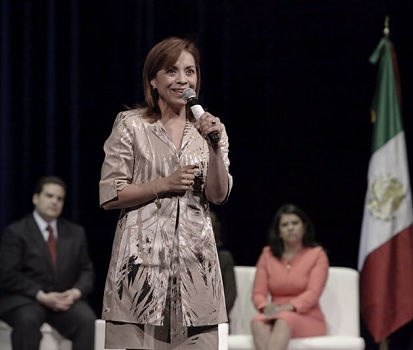 Notably, in the past decade, it has happened increasingly in Latin America. A region known for its machismo and Catholicism, and home to the world’s most restrictive abortion laws is electing one female head of state after another: Panama, Argentina, Chile, Brazil, Costa Rica and now, potentially, Mexico.

Earlier this month, Josefina Vázquez Mota, an economist and former secretary of education, won the Presidential nomination from her party, the National Action Party (PAN). She is the first woman to win the nomination from a major party, and could very well become Mexico’s first female President in the country’s general elections on July 1.

Coverage of Vázquez Mota’s rise has been vast. All of the coverage has, of course, noted that she is a woman, that her very success so far is historic and that she’s poised to break perhaps the thickest glass ceiling of all. NPR notes her “battle with machismo,” and describes a moment where she snaps at one of her opponents, Enrique Pena Nieto, when he suggests only “the woman of the house” would know a banal household fact like the price of tortillas.

I am a woman, I am a housewife, I am a government official, I’ve been twice a government secretary, I’ve been leader of a parliamentary group, I am an economist, she said.

Slate suggests that Vázquez Mota’s election as President of Mexico would be “a step forward for women,” while the New York Times says her nomination treads a “new path for Mexico.” Very little of this coverage–and certainly not enough–has discussed about her actual politics in detail and specifically her policies with regards to gender and women’s rights.

This is a swing and a miss. No doubt that Vázquez Mota is battling machismo, but is that the story here? Her politics are much more relevant to her candidacy than her gender, and though her election as Mexico’s first female president is historic in itself and would seem a good thing, her politics are actually harmful to women.

Unfortunately, as we have seen through the examples of many women in politics in Mexico, being a woman does not guarantee the issues that you are going to stand up for or prioritize, and especially that you will put the advancement of women’s rights on the top of your agenda, says Regina Tamés Noriega, Executive Director of GIRE, a leading women’s rights group in Mexico, in an interview last week.

Though Vázquez Mota has not spoken at length about her stance on abortion, she has made it clear that she “will not support reproductive rights.”

When asked about abortion, she has said that she supports the position of [her party] PAN, which is to respect life but that they don’t want to see abortion criminalized. Her position remains quite vague and she doesn’t seem to want to get into it, says Tamés Noriega.

Abortion (and miscarriage suspected as induced abortion) is highly restricted and widely criminalized in Mexico.

This matters all the time, but it matters especially now, as Mexico finds itself in the midst of an anti-abortion backlash. For decades, abortion in Mexico has been largely illegal–available countrywide in cases of rape, and in some other instances, depending on the state. In 2007, it became legal through the first trimester in Mexico City and a landmark court decision the next year upheld this law, and made the procedure free for all women. As an organized response–and this will sound familiar to anyone tracking the steady and systematic dismantling of reproductive rights in the US–the passage of 17 state amendments (to laws already restricting abortion access) defined life as beginning at conception, 16 of which still remain in place. In September 2010, eight women in Guanajuato State were jailed for “homicide” in connection with suspected abortion.

Electing Vázquez Mota in Mexico would be like electing Sarah Palin or Michelle Bachman as president in the US. A win for women? Some might say, and perhaps it would be–very fleetingly or on a very superficial level–though not for women seeking their health and rights in the immediate or long run. “I do believe that it may break new ground for women, but it doesn’t necessarily mean that women will be represented [by her],” said Tamés Noriega.

We don’t have to look far for examples of women in high places who don’t support women’s rights or gender justice more broadly. After Laura Chinchilla made history as Costa Rica’s first female president in 2010, Samhita Mukhopadhyay pointed out the paradox of her election:

I suppose this is one of those things you would be excited about..except, Chinchilla is opposed to same-sex marriage, abortion and the morning after pill. We are proven once again that having a vagina does not ensure you will protect others that have them.

This would seem to be a very obvious point, yet it falls through the cracks time and again. Coverage of Vázquez Mota’s campaign should be honest about the impact that her election would have for women, beyond simply her gender, but her actual vision, policies, and appointments. In this day and age–when we have so many examples of strong female political leaders–it’s no longer enough to note that she’s female. We want to know what she’s saying, what she’ll do, and how this will affect women (and men) in her country.

Perhaps the more pressing question–given the grave situation for reproductive rights in Mexico at this time–is what will anyone do for women? While Tamés Noriega says Vázquez Mota has yet to articulate any kind of clear or promising agenda on gender (read reproductive rights, violence against women, trafficking, etc.), neither have any of the other party candidates.

I think Mexico is ready for a woman president, but what we are really ready for is someone to move our country forward. We need a leader who will solve our country’s problems with accountability, and it is irrelevant whether that person is a man or woman, she said.