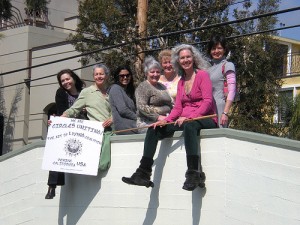 As children we’re taught that even those who seem different from us share, at heart, the same hopes and dreams. We learn in school that world peace and equality are the ultimate of aspirations. But by the time we’re adults, most of us are more cynical, even jaded: World peace is nothing more than the punchline to a joke about beauty pageant contestants or the name of a basketball player.

So it’s all the more important to be reminded that, while world peace and equality may seem  distant fantasies of a hard-won future, the key to eating an elephant (as the saying goes) is one bite at a time. That seems to be the motto that guides Join Me on the Bridge, an event designed by Women for Women International, an organization devoted to helping survivors of war rebuild their lives. The campaign’s mission is to bring together people from all walks of life, in communities all over the world, “in taking a stand for peace and women’s equality.”

“We’ve now had 101 years of International Women’s Day, and still it’s a man’s world,” says British TV host June Sarpong, one of many women who “join[ed] forces with Women for Women and other great, inspiring women [to] kick off a new century for real women’s equality all over the world. It’s time we had our say and used our voice and power to build a better world for us all.”

In 2010, the first Join Me on the Bridge campaign brought together women from Rwanda and the Democratic Republic of Congo on a literal bridge between their war-torn nations, as well as mobilized more than 20,000 other women in 17 other countries, who gathered together on March 8, International Women’s Day, under a banner of peace. Two years later, Join Me on the Bridge has grown exponentially, with events taking place all over the world, from San Francisco to London to Gulu, Uganda, to Pristina, Kosovo.

You can (and should!) join the movement as well. See Join Me On the Bridge’s events page to find a gathering near you on March 8, or propose your own celebration of peace and equality for women in your hometown.

Part Four in a Women’s History Month series celebrating organizations and ideas that represent the future of feminism.

Photo of Join Me on the Bridge event in Venice, CA, in 2010 by codepinkhq under license from Creative Commons