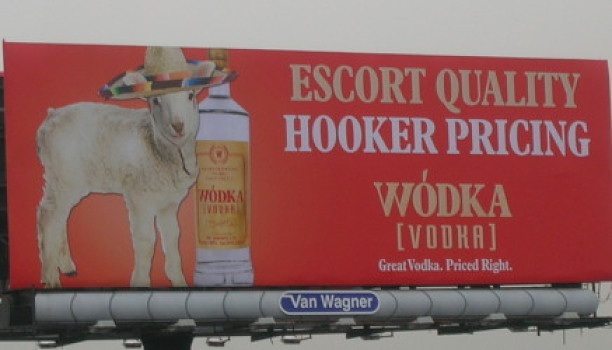 A sheep. In a sombrero. Next to a vodka bottle. With the tagline, “Escort Quality, Hooker Pricing.”

Where do I begin?

Well, let’s start with the facts: The NYC billboard is part of a Wodka campaign marketing its vodka as high quality and low price. Other billboards in the campaign read, “Lobstah Quality. Chowdah Pricing,” “Great Vodka. Priced Right” and “Christmas Quality, Hanukah Pricing.” After attracting local protest in the Bronx, the “Escort Quality” billboard was taken down at the end of February, but has since been spotted in Harlem above the West Side Highway.

Now, on to the analysis. I heard the punchline of the ad before actually seeing the picture and thought, “Great. Another alcohol billboard with a too-thin, scantily clad woman in a submissive position.”

But I was–if not pleasantly, exactly–certainly surprised. Instead, the advertisement shows a sheep in a multi-colored sombrero nuzzling up to the vodka bottle. Is the sheep supposed to be a stand-in for a women? (After all, the “lobster” ad depicts a lobster.) Were the makers too afraid to illustrate what an “escort” might look like? Does the lamb symbolize purity? Does the sombrero have racial connotations? Or is the whole thing just plain absurdism?

Whatever the case, the mysterious lamb doesn’t take away from the problems with the slogan. This isn’t the first ad that has likened its product to a woman for sale, but in actually referencing prostitutes, it’s probably the most blatant (and strangest).

Especially troubling is the ad’s distinction between “escorts” and “hookers,” which perpetuates stereotypes about different “classes” of sex workers that have very real and very dangerous effects. Labeling street prostitutes with derogatory terms like “hooker” or “ho” feeds into a larger culture that allows violent criminals to target street prostitutes with impunity. Consider the statistics:

Abolishing the word “hooker” won’t make these issues disappear overnight. But–regardless of your beliefs about prostitution–using language that recognizes that street prostitutes are people with rights is a first step toward changing the attitude that violence towards them is a matter of course.

Wodka, which recently came under criticism for an anti-Semitic ad, is clearly aiming for shock value. So giving them an earful may not deter them, but you can try it here. At the very least, let’s use this as a teaching moment. Privileging some sex workers over others does nothing to make street prostitutes’ working conditions better or their lives safer. Whatever your position on prostitution, which can be a heated issue among feminists, we can all agree that “hooker” doesn’t help matters.