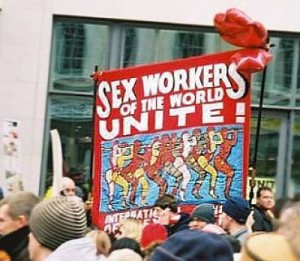 There’s no doubt that sex work in its various manifestations, ranging from stripping to prostitution to pornography, remains a contentious issue. It’s one on which even feminists notoriously disagree–a “fracture in ideology,” according to Kate Holden–with discussions veering back and forth between victimization and empowerment.

Of course there’s a substantial difference between becoming a sex worker by choice and, say, being sex trafficked by force, and I doubt anyone would argue that forced prostitution is empowering. However, “sex slavery,” as popularized in films and on shows such as Law and Order: Special Victims Unit, represents a more extreme scenario, with many sex workers–at least in the U.S.–falling somewhere on a spectrum between choice and circumstance. One thing isn’t really up for debate, though: A sex worker, woman or man, cis- or transgender, shouldn’t be deprived of rights, protection or access to health care due to the social stigma that weighs on their profession. Today’s post features projects and organizations recognizing that no one should be left behind in our continual battle for equality.

Washington, D.C.-based HIPS (Helping Individual Prostitutes Survive) works on a “harm reduction model … to address the impact that HIV/AIDS, sexually transmitted infections, discrimination, poverty, violence and drug use have on the lives of individuals engaging in sex work.” HIPS’ initiatives include both emotional and practical support structures: peer education, support groups for transgender and women workers and a mobile outreach program that offers STI testing, syringe exchange and access to contraception.

The Sex Worker’s Project, run out of the Urban Justice Center in New York City, also works with individual sex workers, but its main focus is on advocacy to protect sex workers from violence and undue prosecution. For example, a recent campaign involved a recommendation from the UN that the U.S. acknowledge the “special vulnerability of sexual workers to violence and human rights abuses,” which the U.S. government officially endorsed in March 2011.

And then there’s the collaborative blog Tits and Sass, which offers a socially conscious, open-minded space for sex workers to write about their experiences and bust public misconceptions of their profession. Founded in 2011 after the demise of the sex work magazine $pread, the blog’s aim was to fill a “void when it came to witty commentary on the public image of our industry.” Contributors make the point that common stereotypes of sex workers can “have an impact on the realities of [their] lives as sex workers every bit as strong as the law.”

Even if our opinions on the sex work industry diverge, we can all agree that being a sex worker–whether by choice, circumstance or force–should not disqualify someone from basic human dignity, care and respect.

Part Fifteen in a Women’s History Month series celebrating organizations and ideas that represent the future of feminism.