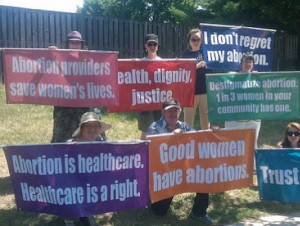 A proposed Tennessee law would require the state Department of Health to publish on its website the names of doctors who perform abortions, as well as extensive demographic information about each woman to undergo the procedure. The Defense of Life Act is scheduled to be introduced in the Tennessee House Health and Human Resources Committee this week. The bill would also mandate that doctors who perform abortions have admitting privileges at nearby hospitals.

Opponents say the bill would intimidate women seeking abortions and the doctors who perform them. Jeff Teague, president and CEO of Planned Parenthood of Middle and East Tennessee, sharply criticized the proposed law:

In an environment where doctors are victims of violence—and we’ve had physicians who provide abortion care murdered in the past few years–I think this is an attempt to intimidate and allow for providers to be terrorized.

Opponents are also concerned that the bill would effectively disclose the identities of some women who have abortions in small, rural communities. The information to be made public includes the woman’s age, race, county, marital status, number of children, number of former pregnancies and education level, as well as the location of the procedure.

Representative Gary Odom(D-Nashville) stated, “This is a dangerous piece of legislation,” telling the Huffington Post, “It puts a target on women’s and physicians’ backs.”