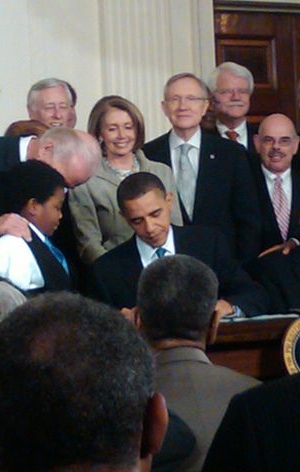 By Cindy Pearson, co-founder of Raising Women’s Voices for the Health Care We Need

For the tenth #HERvotes blog carnival, we’re celebrating the second anniversary of the new health-reform law, the Affordable Care Act, or ACA.

Why are women so excited about the ACA? Well, for a start, the law has already started removing barriers to health care and improving services for millions of women and our families, helping us access the care we need to stay healthy.

This week’s #HERvotes blog carnival is going to raise women’s voices all across the country. We will tell our stories of how the Affordable Care Act has helped us, what is still wrong with our health care system and what we’re doing to make a difference. We will express our anger about the insurance company abuses–such as charging us more than men for our health insurance–that will continue until the ACA is fully implemented. And perhaps most importantly, we’ll share why this important advance for women should be upheld by the Supreme Court when it takes up the Affordable Care Act next week.

Please join us in lifting our voices–because we all have something to gain from the Affordable Care Act.

You can participate by telling your own story and by sharing the posts below on Facebook, Twitter (using the hashtag #HERvotes) and other social media.

As ACA Faces a Supreme Court Challenge, Who Is at Stake?– Shivana Jorawar, NAPAWF

10 Things to LOVE About the Affordable Care Act– Debra Ness, National Partnership for Women and Families

How the ACA is Helping My Family–  Sarah Robinson, National Women’s Law Center

Where Would Women be Today without the Landmark Programs that were Enacted Over the Last 45 Years to Protect and Advance Women’s Health?– Raising Women’s Voices

The Impact of the Affordable Care Act on One Young Woman– Lindsay Yancich, NOW

Why We Need the Affordable Care Act- Julie Seger, AAUW

2 Year Anniversary of the Affordable Care Act-What’s In It for Young People?- Sarah Audelo, Advocates for Youth

Cindy Pearson is Executive Director of the National Women's Health Network and co-founder of Raising Women’s Voices for the Health Care We Need.