Wall Street Wage Gaps Give Women Yet Another Reason To Occupy - Ms. Magazine
Skip to content 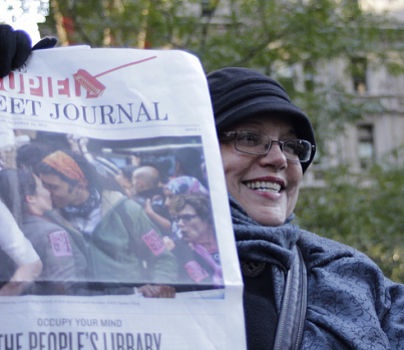 “Women who want to earn more on Wall Street than their male colleagues have one reliable option. They can set up a shoe-shine stand in Lower Manhattan.”

So concluded Bloomberg reporter Frank Bass after crunching Census data on the gender wage gap in various professions. His findings: Out of 265 major occupations, service work such as shoe shining and personal care was the only one in which women earned, on average, more than men ($1.02 to every $1). And the high-paying jobs of Wall Street had the biggest gap:

The six jobs with the largest gender gap in pay and at least 10,000 men and 10,000 women were in the Wall Street-heavy financial sector: insurance agents, managers, clerks, securities sales agents, personal advisers and other specialists.

As Louise Marie Roth, author of Selling Women Short: Gender and Money on Wall Street noted to Bloomberg, that salary discrepancy arises from secrecy surrounding bonuses and the fact that men are more likely to be in risky and rewarding positions like traders–both of which undercut the idea that Wall Street is a “meritocracy.”

To one group of women’s rights activists, the Wall Street gender gap won’t come as a surprise. They haven’t been setting up shoeshine stands near the big banks, but they have set up tents, participated in marches and even dressed up as squids (to mock Goldman Sachs’ business practices).

They are the feminists of Occupy Wall Street, a movement now resurging after a winter lull. For Ms. magazine’s latest issue, I spent several weeks trailing Occupy activists and covering feminism in the movement. I found that the white-male demographics of the 1 percent, as typified by Wall Street, were not lost on the legions of protesters who identified with feminist and womanist goals.

“If you’re going to occupy Wall Street, [you must] address the underlying patriarchy that it represents. Obviously that is a system that depends a large part on the exploitation, subjugation and control of women,” Lucinda Marshall of Occupy Patriarchy told me this winter. “That’s really why it’s so crucial for feminists to prioritize addressing this, and why feminism itself is important to the Occupy movement.”

The chance to draw the connections between Wall Street and other social justice issues like gender oppression is one that feminist Occupiers want to seize. “In the progressive movement we talk about things in silos, as though economic justice and gender justice aren’t connected. But there are all these reasons why they really are,” says Aliya Rahman of Occupy Cincinnati.

As the nationwide Occupy movement gears up for an “American Spring” to match the 2011 Arab Spring, feminist Occupiers remain active, building their own communities of resistance. Women of color lead Occupy’s anti-foreclosure movement, and Occupiers have vocally protested the “War on Women” online and in the streets.

So as the weather warms up, watch for feminist Occupiers to make the connections between patriarchy, income inequality and political disenfranchisement. In New York and other cities, activists are planning to hold more feminist-specific general assemblies (GAs) using the direct democratic format of Occupy meetings to bring occupiers as well as feminist advocates together in an organic, nonhierarchical community. Sounds like a more lasting path to equality than a shoe-shine stand.

To read Sarah Seltzer’s on-the-ground report on the women of Occupy, pick up in the latest issue of Ms., on newsstands now! Or get it direct to your door by joining Ms. today.