A Look Inside the Mind of a Suffragist - Ms. Magazine
Skip to content 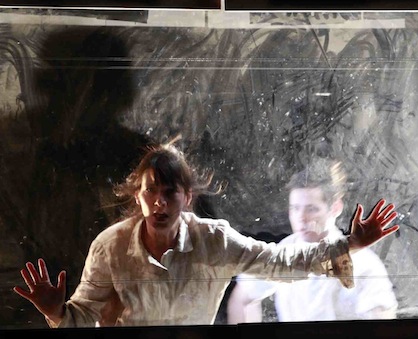 It’s the year 1917. Susan B. Anthony has been dead for 11 years, Elizabeth Cady Stanton for 15. The National American Woman Suffrage Association, currently led by Carrie Chapman Catt, has been agitating since 1890. But women in America still do not have the right to vote.

Fed up, a group of militant suffragists called the National Woman’s Party, led by Alice Paul, holds a protest in June in front of the White House. After being verbally and physically harassed by bystanders while police stand by, they are arrested for “obstructing traffic.” The women are sent to the notorious Occoquan Workhouse, where they demand to be treated as political prisoners and–since they are already fighting injustice anyway–go ahead and stage a hunger strike over the abysmal conditions at the prison.

This is the moment in which Erica Fae and Jill Samuels set their play, Take What Is Yours, opening in New York City on May 3, though the story they tell began decades earlier and didn’t end until 1920. As the front page of the script reads:

Author/performer Fae and co-writer/director Samuels give new life to Paul, a lesser-known hero of the suffrage movement, using meticulously researched primary sources, such as suffragist pamphlets, the National Woman’s Party journal and transcripts of hearings and court trials.

The central action of the play takes place in Occoquan’s psychiatric ward, where Paul was sent in an attempt to discredit her by pronouncing her insane. An alienist (period-speak for psychiatrist) was sent to interview her, and though a stenographer was present for that three-hour encounter, the transcript remains elusive. And so Fae and Samuels have imagined, and invite us to imagine with them, what might have been said. Using words spoken by Paul, her friends and her enemies in other contexts, they reconstruct a conversation in which Paul is lied to, intimidated and otherwise pressured to end her strike.

The creators also use her altered state of mind (she had not eaten for three days) to delve into the past, present and future of the movement. As the creators told Ms. in a recent interview:

It’s the external circumstances of the prison that trigger her into a memory or a reenactment of a key moment. … There’s very little known about her private life. She didn’t speak much, she was choosy with her words, and yet we give her a lot of words to say. [Our] Alice is really a symbol of the movement itself and of all the women.

Using period costumes and moving walls that bring us in and out of the layered realities of the prison and Alice’s mind, Fae and Samuels attempt to tell a story that is historically accurate, psychologically complex and emotionally affective:

I think in a way what we’re doing is creating a moving and emotionally impactful telling of the story. We really want to touch and move people. Because the text is all source material and we’re really using historical words the whole time it’s important to really make sure they’re landing in the here and now.

At the end of the play, Paul’s hallucinatory visions take the the audience forward in time to the triumphant moment in 1919 when Tennessee state Rep. Harry Burns, swayed by a telegram from his mother, casts the deciding vote for the 19th Amendment to the Constitution. Fae and Samuels spoke about this ending, their voices blending together as those of long-standing collaborators often do:

Erica: There is a kind of humor that it ends on a letter from a young man’s mother–

Jill: –and that after 75 years of campaigning it should be such a close call. It’s laughter through grief, I think.

Erica: We assume everyone who is seeing the show is very well aware that women have the right to vote, but this actual story about Harry is not very well known. It allowed us not to put the bow on the ending and still to close it out with a feeling of joy–

Jill: —and honoring that aspect of the women’s experience.

Photo of Erica Fae as Alice and David Riley as Man by Alexander Berg.

The Most Chilling Women in History You Should Know About
Think Build Back Better Is Expensive? Wait Till You Hear the U.S. Defense Budget.
The Danger of Plea Deals in Sexual Assault Cases