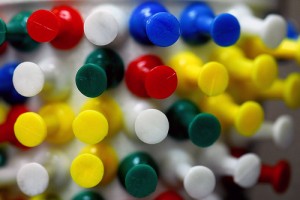 Recently, Pinterest, the newest billion-dollar social network, has been overwhelmingly characterized by online journalists and bloggers as a women-centered social media platform. While there have been discussions, most notably by Johanna Blakely, which suggest that social media neutralizes gender when it comes to marketing demographics, some of us, like my friend Goddessjaz, still wonder if/how social media can function to ameliorate social and cultural problems stemming from sexism and gender stereotypes. As Pinterest’s value reaches $1 billion, women–who account for the majority of social media users and brand consumers–will most likely be targeted more by advertisers the more the platform’s influence spreads.

It’s generally accepted that Pinterest promotes consumerism and advertising, as evidenced by countless images from retailers and publishers (most notably women’s magazines). Aside from the platform itself, Pinterest users play a primary role in how content is curated across the platform. Some users promote controversial (non)eating habits (see also Kate Moss’ hotly debated ‘Skinny’ poster) and body/beauty ideals through pinning and re-pinning images. On the other hand, users also celebrate women’s bodies (particularly those of women of color) through what I call erotic curation on Pinterest. There also seems to be a growing community of users pinning and re-pinning images that highlight transgender issues and experiences. So while Pinterest might very well be categorized as a contentious online space for pervasive advertising and “otherizing” types of bodies and experiences, it might also serve as a mainstream platform to highlight our faces, bodies and stories.

Some critics have convincingly argued that the recent $1 billion venture capital announcement may in fact place Pinterest at the center of the next tech bubble. Yet, regardless of speculation, Pinterest, as we know it today, can greatly influence the way we communicate, socialize and organize using visual imagery.

Being that we (our bodies, our ideas, our hobbies, our dreams) drive Pinterest, it behooves us to seek out ways to use this platform to enhance our work in improving the lives of cis/women, girls and our allies. That said, however, meaningful content on Pinterest does exist, such as boards that feature topics on feminism, LGBTQ, domestic violence prevention, rape culture awareness, and my personal favorite (although terribly scanty) Gloria Anzaldua. But how might sharing and curating these images via social networks benefit our activism work and civic engagement online and offline?  In other words, how can we make Pinterest work for us?

Educators, activists and researchers may want to consider the following questions:

1. How can we use Pinterest as a media literacy tool to combat sexism and gender stereotypes in order to ‘trouble the familiar’, so to speak? (For practical ways of using Pinterest for media literacy education, see Media Make Change.)
2. How can we use Pinterest to organize around issues and disseminate messages using visual imagery?
3. How might the process of curating images on Pinterest work as a method for investigating the ways in which bodies are “marked'”in online social spaces?

Perhaps another important question to consider is whether or not Pinterest is even worth our time. I want to believe so. As an educator, media-maker and scholar, I find it terribly difficult to work towards transformative institutional change without having the necessary tools at my disposal. So here we may have a useful tool in Pinterest. Considering that Pinterest (along with the newly publicly traded multi-billion-dollar social network, Facebook) is here to stay, at least for now, why not use the platform to expand the reach of our projects in ways that benefit our community interests?

I recognize the irony of this query, particularly as it concerns the idea of contributing to platforms that have histories of questionable privacy and “rights to content” practices. Nonetheless, the idea of involving our work within the Pinterest platform as a means to address problems that face its primary users is something we might want to consider with thoughtfulness and care–even if it means choosing not to engage with the platform altogether.

Photo by Flickr user hydropeek under license from Creative Commons 2.0