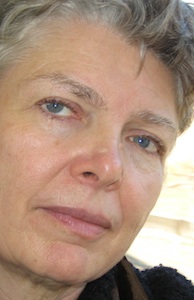 National Poetry Month may be over, but it’s never too late to recognize a wonderful poet and her poems.

On April 19, Minnie Bruce Pratt’s latest collection, Inside the Money Machine, won the 2011 Audre Lorde Award for Lesbian Poetry from The Publishing Triangle, whose annual Awards honor the best lesbian and gay nonfiction, poetry and fiction. Pratt has been writing poetry since the 1970s, and was a pioneer poetic spirit of the women’s and gay liberation movements. According to the Poetry Foundation, she is “recognized as an eminent poet in the United States … an essayist, activist, lesbian-feminist and educator.” And as a critic from Publishers Weekly commented on her book Rebellion: Essays, 1980-1991,

Pratt’s eleven polished, articulate essays offer a striking example of everyday philosophy at work: a feminist assessing her experiences and learning from them.

Inside the Money Machine is a decidedly un-machine-like collection of poems. One finds delicate linguistic surprises, sensuous attention to overlooked details and uncommon compassion for the invisible poor and working-class women. Pratt’s style is “poetic” in the best sense, “having an imaginative or sensitively emotional style of expression,” as the New Oxford American Dictionary would define it. Where one might have expected loud political protest, one finds instead a quiet voice of unrelenting strength. Where one might have expected personal complaint, one finds a selfless observer, determined to witness and record misfortune and misery. The individual is never irrelevant, and the stories of individuals are told with a sense that the poet has asked questions because she cares, and listened carefully because she wants to help. 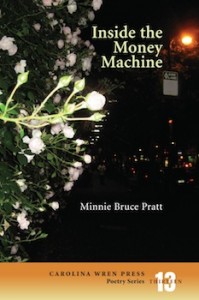 In Pratt’s work, poetry is made useful, in an almost journalistic sense. But the beauty and sadness of the language draw us into another world, far away from a newspaper report, where emotion is valuable. Many of the poems’ titles are direct, simple, ordinary, such as “Making a Phone Call” and “Chopping Peppers.” In these lines from “Making a Phone Call,” the world of a worker’s effort, insecurity and yearning is captured in one image:

But any day now, her green vine
creeping along the divider will reach the window if
sales are good, if she’s lucky.

In “Chopping Peppers,” lowly labor in painful circumstances leads a worker to dream of escape:

I hold the slippery bowl
and inside is the secret, an island of seeds, a palisade,
a reef, an outcropping of the future waiting for decay,
for the collapse of walls, for escape.

Pratt doesn’t shy away from poems about her own work as a poet, and thank goodness, because they’re some of my favorites. “Sparks Fly Upward” sees beyond the “ratchety / static of rain hitting cement” to “trees blazing up in their dying.” Then, we hear the poet’s ecstatic cry, “If I could jump into their bonfire! If I / could fall headlong into that brief glory.” This is the drive to create, to produce poetry, when dreary, daily labor suddenly catches fire and gives light and heat. Pratt’s poems are as lively and energetic as fire, and filled with a pure desire for life and connection:

It’s that I don’t want to be done with this joy,
matter striking consciousness, making
the thoughts and words that fly out to find
you.

In the very moving “Forgetting to Clock Out,” a courageous nursing teacher, a working-class hero who literally threw herself into the line of fire during a strike, finishes her lifetime of sacrifice with no official recognition, silent, invisible. Recording, remembering and honoring is the important work of this book of poems. Eventually, the story-teller gives her own pink-slip story, and in one poem, “Eating Alone,” commiserates:

I know that before my story there are all the other stories.
Whatever place I come to, one of you has been there before.

Finally, these eloquent lines from “Waking to Work” speak for many of us:

How do we go on? Longing for something bigger than us.
But not this now, not this buying and selling. If we could each
make what we can, take what we need, and that be enough—