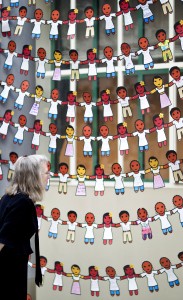 Zawadi, Juan, Aurora and Sookjay are four of the dolls that will be participating in the Paper Doll Campaign at the 19th International AIDS Conference (AIDS 2012), and they are currently traveling around the world to let people know about the importance of the female condom in preventing HIV.

By collecting 30,000 paper dolls with messages written by people around the world explaining the need for female condoms, the Universal Access to Female Condoms Joint Programme (UAFC) is attempting to break the Guinness World Record for the “longest chain of paper dolls.” If they meet their goal, the dolls will stretch nearly four miles.

Throughout the conference, which will take place in Washington D.C. from July 22-27, delegates will be asked to complete their own doll to be added to the chain. But making the Guiness record book is not the main point of the chain:  The dolls are meant to spread the word about the benefits of female condoms and encourage making them more available and less expensive.

“The goal of the campaign is to draw public attention to a real, underutilized HIV prevention tool,” said Anna Forbes, senior advisor and creator of the Paper Doll Campaign. “Every doll speaks for every person.” 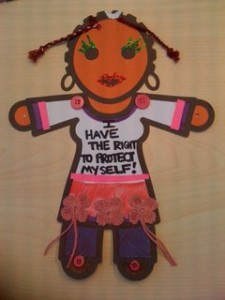 The female condom is the only women-initiated prevention against HIV and unwanted pregnancy. However, female condoms make up less than one percent of condoms used worldwide, even though they have existed for almost 20 years. They are overpriced, poorly advertised or unavailable.

Although only one model is sold in the U.S., there are two other models available worldwide. All three of the models have been proven to guard against HIV by blocking semen from entering a woman’s body during intercourse.

More than half of those infected with HIV are women. “This epidemic unfortunately remains an epidemic of women,” explained Michel Sidibe, executive director of the Joint United Nations Programme on HIV/AIDS. Because one of the most common ways of contracting HIV are through sexual contact, the female condom could substantially decrease the rate of infection.

While she has seen many of the paper dolls contributed to the campaign, Forbes explained that the message written on one stood out. A 15-year-old girl from the slums of Kenya wrote,

Although Forbes admitted that reaching the goal of 30,000 dolls by the end of the conference will be difficult, she explained that by “speak[ing] out in loud voice at the AIDS conference … the campaign will be successful.”

To participate, messages can be written at http://www.sign4femalecondoms.org or on the Facebook page, and they will be transferred onto dolls to be included in the conference.