Feminist With a Funny Bone - Ms. Magazine
Skip to content 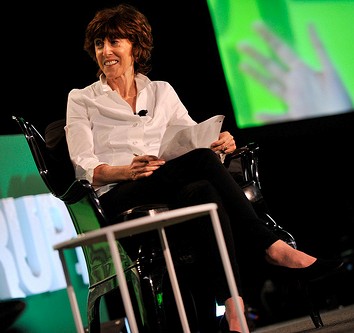 Feminists have long gotten the bad rap that they don’t have a sense of humor. Many don’t, but I’d venture they’re equal in number to sexists who aren’t funny. In fact, the real reason feminists have been charged with humorlessness is probably because they won’t laugh at what sexists try to pass off as “jokes” at women’s expense.

Nora Ephron was a “feminist with a funny bone,” in the words of author Patrick McGilligan. And she admitted that could be a somewhat tricky identity; since she could brilliantly find humor in almost everything, she’d find it in feminist foibles as well. As she wrote in one of her laugh-a-paragraph books of essays, Crazy Salad (1975),

I am a writer and a feminist, and the two seem to be constantly in conflict … ever since I become loosely involved in it, it has seemed to me one of the recurring ironies of this movement that there is no way to tell the truth about it without, in some small way, seeming to hurt it.

But it’s hard to see Ephron as anything but a feminist inspiration–and not just because she was so successful as a journalist, essayist, screenwriter, film director and producer. From the early days of the second wave, she planted her flag in feminist territory and spoke out on behalf of women’s highest aspirations in the world. When she went to her 10th Wellesley College reunion in 1972, she chided her alma mater–which, she later claimed, had thrown out six women for being lesbians while she was a student there–saying,

How marvelous it would have been to go to a women’s college that encouraged impoliteness, that rewarded aggression, that encouraged argument. … Why remain a school for women unless you are prepared to deal with the problems women have in today’s society?

For her, there was a bottom line to feminism, and it was reproductive rights. As she responded to the question “Who Gets to Be a Feminist?” when Slate launched its DoubleX blog in 2010,

I know that I’m supposed to write 500 words on this subject, but it seems much simpler: You can’t call yourself a feminist if you don’t believe in the right to abortion.

Long before that, she put her name on the line for this issue: Ephron was a signer of the famous 1972 Ms. magazine declaration,”We Have Had Abortions,” along with such other notables as Gloria Steinem, Billie Jean King, Lillian Hellman, Susan Sontag and Anais Nin. She said later she never had an abortion, but signed the petition in solidarity.

When Ephron returned to Wellesley to speak to graduates in 1996, she had more feminist words of wisdom to impart, among them:

Don’t underestimate how much antagonism there is toward women and how many people wish we could turn the clock back. One of the things people always say to you if you get upset is, don’t take it personally, but listen hard to what’s going on and, please, I beg you, take it personally. Understand: Every attack on Hillary Clinton for not knowing her place is an attack on you. …

Above all, be the heroine of your life, not the victim. …

Whatever you choose, however many roads you travel, I hope that you choose not to be a lady. I hope you will find some way to break the rules and make a little trouble out there. And I also hope that you will choose to make some of that trouble on behalf of women.

Women were certainly not victims in Ephron’s films, comical as they might be. And in the film I enjoyed most, Julie & Julia, the male characters achieved their own kind of heroism in a most iconoclastic, feminist way. As Los Angeles Times critic Kenneth Turan put it,

Though both women [French cooking guru Julia Childs and the blogger who tried all her recipes, Julie Powell] have loyal and encouraging husbands … who are crucial to their success, this is the rare Hollywood film where it’s the men who are the support team, not the women.

Nora Ephron made wonderful trouble on behalf of women. We giggled through her essays, we roared at her movies and we were buoyed by the underlying, unapologetic feminism that informed her life. We’ll never forget her.

Photo of Ephron in 2011 by Flickr user TechCrunch under license from Creative Commons 2.0