Racial Profiling in Tennessee: Another Arizona for Immigrants? - Ms. Magazine
Skip to content 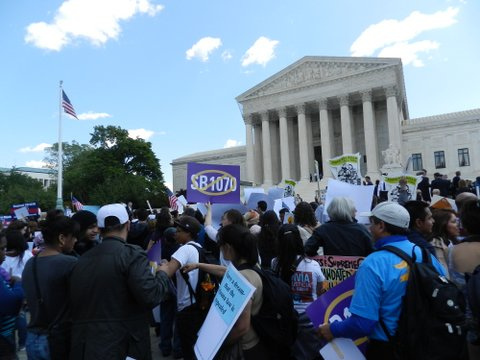 Nearly four years ago, Juana Villegas, a nine-months-pregnant undocumented Mexican immigrant living in Nashville, was on her way home from a doctor’s appointment with her three children when was pulled over by local police and arrested for driving without a license.

The offense was a misdemeanor, but the officer detained her because he suspected that she might be undocumented. When they ran a background check they found that she had no criminal history, but that she was in the country illegally and had been previously deported.

Two days later, while in custody, Juana went into labor and was taken to a hospital. Officers shackled her feet and hands to the hospital bed during most of her labor and denied her the right to call or see her husband.  After she was released from the hospital she was refused a breast pump even though she was separated from her nursing baby for two days.

Juana is a member of the Migrant Women’s Committee of the Tennessee Immigrant and Refugee Rights Coalition, both of which are part of a broader movement of creative and vibrant local resistance in the fight against some of the most racist laws in the nation. Juana filed a civil suit in federal district court and last year won $200,000 for illegal and unconstitutional treatment from the Davidson County Sheriff’s office. That decision is being appealed by Davidson County Sheriff Daron Hall—Tennessee’s very own Joe Arpaio.

Juana’s detention by local officials on immigration charges, usually a preserve of the federal government, was made possible by a special local-federal agreement, known as 287(g)–an Immigration and Customs Enforcement (ICE) partnership program that gives local officials authority to enforce immigration law. That’s the same program that led to controversy and federal sanctioning of Sheriff Arpaio in Arizona.

According to the ICE website, local officers are authorized through 287(g) to conduct investigations “relating to violent crimes, human smuggling, gang/organized crime activity, sexual-related offenses, narcotics smuggling and money laundering.” There’s no mention of driving without a license. Clearly, Juana was racially profiled.

While national attention has been focused on Arizona’s anti-immigrant law, SB 1070, Tennessee continues to work closely with the federal government under the auspices of 287(g), and surveillance of immigrant communities has heightened because of this partnership. These days, an immigrant, or anyone who resembles an immigrant, who is stopped for a minor infraction is in jeopardy of being detained on immigration charges. Juana’s case is counter to everything that the Obama administration says is the intention of immigration enforcement.

The recent Supreme Court ruling on SB 1070  struck down key provisions of the law but did not declare unconstitutional the portion that allows local officials to check the status of suspected undocumented immigrants. What that means is that people like Juana are still vulnerable to routine mistreatment and racial profiling. She and her allies in the Migrant Women’s Committee are not sitting idly by, however:  They are on the front lines of the fight to halt the unwarranted and relentless attacks on the undocumented.

Photo of rally against SB 1070 outside U.S. Supreme Court in April 2012 by Mexicanos Sin Fronteras via Creative Commons 3.0