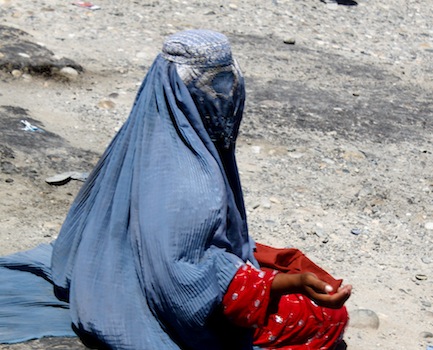 Update: Women and men flooded the streets of Kabul Wednesday to protest the public execution of an Afghan woman accused of adultery. The protest included a march from the Afghan Ministry of Women’s Affairs to a traffic stop near a U.N. compound.

A three-minute video obtained by Reuters shows a man shooting a burqa-clad woman five times at close range with an automatic rifle, with about 150 men watching. Afghan officials say that the man carrying out the brutal public execution is a member of the Taliban and that the woman, who had been accused of adultery, was killed a week ago only an hour’s drive from the Afghan capital of Kabul, in the village of Qimchok in Shinwari district.

As the man with the rifle approaches the woman, another man says, “Allah warns us not to get close to adultery because it’s the wrong way. It is the order of Allah that she be executed.”

According to the Telegraph, the woman was reportedly a 22-year-old named Najiba. The first two shots missed her but the third struck her. The woman fell to the ground but the gunman continued to fire at her and the crowd shouted “Long live Islam, Long live Mujahideen (holy warriors).”

Provincial Governor Basir Salangi says that two Taliban commanders were sexually involved with the woman “either through rape or romantically, and decided to torture her and then kill her to settle a dispute between the two of them.”

Such public executions were common when the Taliban was in power in the 1990s. But as Ben Farmer writes in the Telegraph, footage and reports of these have more recently “emerged from rural areas where the militants’ retain influence and mete out their own justice.”

“After 10 years (of foreign intervention), and only a few kilometers from Kabul … how could this happen in front of all these people?” female lawmaker Fawzia Koofi said of the public execution in Parwan.

“This is happening under a government that claims to have made so much progress in women’s rights, claims to have changed women’s lives and this is unacceptable. It is a huge step backwards,” said Koofi, a campaigner for girls’ education who hopes to run in the 2014 presidential election.

Afghanistan’s independent human rights commission says that violence against women has risen sharply in the past year. Reuters describes a gruesome “honor killing” earlier last week in eastern Afghanistan, in which a 30-year-old woman and two of her children were beheaded by a man said to be her divorced husband.

The Afghanistan Human Rights Commission has condemned the public execution and the American embassy in Kabul has issued a statement about this “heinous crime.” The cruel and public killing of the woman is a horrific reminder of how violence remains a too-present reality for many women in Afghanistan.