War on Women Returns to Mississippi—Where It's Been All Along - Ms. Magazine
Skip to content 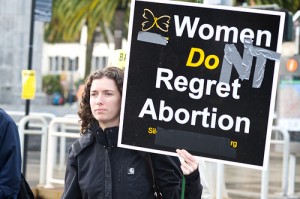 UPDATE, JULY 11: U.S. District Judge Daniel Jordan has ordered an extension of the temporary order, allowing the Jackson Women’s Health Organization to stay open. He will now review rules from the Mississippi Department of Health on how they will administer the state’s new abortion law, and then determine whether the abortion clinic can remain in business or must close.

“Some [protesters] hang out in lawn chairs. Some bark at cars and passersby,” says Deirdra Harris Glover, a Jackson resident and founder of the grassroots organization Pro Choice Mississippi. “Most only have eyes for the clinic, its staff and its clients.”

Glover sees the clinic each morning from her favorite coffee shop across the street and checks whether the JWHO sign remains intact. “It’s been kicked or beaten down more often than not in recent months,” she says.

To JWHO owner Diane Derzis, it was “business as usual” when she returned to work a week ago after a temporary injunction from a U.S. district court barred Mississippi from enacting an overreaching TRAP law that requires physicians who perform abortions to be board-certified in obstetrics and gynecology, and have admitting privileges at a local hospital. The law, of course, was unnecessary: Contrary to what state legislators claimed was a “very complicated procedure,” the first and second-trimester abortions performed at JWHO were safe and the physicians, who are already board-certified, more than attentive to the care of their patients. Derzis, who took control of the clinic in 2010, maintains post-surgical abortion complications are rare—and hardly enough to qualify for admitting privileges.

Still, Derzis and her employees hustled to keep the metal detector-framed doors of Jackson Women’s Health Organization open—not only for abortions, but also for the additional gynecology services it provides to Jackson-area women

“The two physicians who perform the bulk of the clinic’s abortions have sought admitting privileges, but the Department of Health decided to enforce this requirement on a [unreasonably short] timeline,” says Michelle Movahed, a staff attorney for the Center for Reproductive Rights. Mississippi Gov. Phil Bryant signed the law in mid-April, giving the clinic barely two months to comply. “One hospital wouldn’t even talk to the doctors for a month,” says Movahed, adding that the rushed timing was the reason for the Center’s emergency filing of a civil action against the state.

Derzis is prepared for a long legal battle: The temporary injunction gives Derzis and JWHO until tomorrow, July 11, when it expires. A hearing will be held that day to determine whether or not to grant JWHO more time.

In a rather bold move, Derzis and the Center for Reproductive Rights are using on-record quotes from “significant state legislators and executive officers” to prove that the law was not motivated, as purported, by health concerns. Rather, it was intended to make Mississippi the first “abortion-free” state in the U.S. since the passage of Roe v. Wade, which would be an “improper purpose.”

“Mississippi is the vanguard of the anti-choice movement,” says Movahed, adding that the state’s politicians, including Gov. Bryant, “aren’t even pretending” that this is a women’s health issue. “[The legislators] really summed up the state of affairs that anti-choicers would like to see in the rest of the nation.”

The War on Women has been zig-zagging across the country, heading west to Kansas, where TRAP laws almost wiped out the state’s three remaining abortion providers, north to Michigan in the form of an onerous package of anti-abortion bills, and east to Virginia, where the draconian ultrasound law is about to be enacted. But Mississippi remains the war’s ground zero among the states. The state has lingered in something of a pre-Roe climate, passing and sustaining demeaning TRAP laws for nearly four decades. These laws have routinely pushed abortion clinics out of the state, mandating trivial codes ranging from building construction to administrative that run the price of opening and maintaining a facility high.

If JWHO remains open without receiving a longer injunction, it could face fines of up to $2,000 a day. It would be devastating to lose the state’s pro-choice beacon.

“Like any abortion clinic in the nation, JWHO offers women and their families options,” says Glover. “But unlike any other, as the only abortion provider in Mississippi, [JWHO] is a symbol of agency and freedom.”

Over the years, the owners have fought to keep it that way. Since 2002, when the Jackson Women’s Health Organization became the last abortion provider in Mississippi, the state government has kept the clinic squarely in its cross hairs. The Jackson clinic was entangled with federal courts once before, when a 2004 TRAP law attempted to ban the performance of second-trimester abortions in the state. A federal district court sided with the clinic, however, and struck down the law as unconstitutional.

In comparison to its one remaining abortion clinic, Mississippi is home to 45 crisis pregnancy centers (CPCs), which are essentially anti-abortion counseling centers. CPCs purports to inform women of their pregnancy options, but discourage women from abortions and refuse to provide abortion referrals.

The state’s only Planned Parenthood clinic, the Hattiesburg Center, is a two-hour drive south of the state capitol Jackson, located in the southeast region of Mississippi. It provides abortion referrals but has never provided abortions, focusing instead on preventive services, particularly a contraception program for low-income women, says regional director of public policy Felicia Brown-Williams. Women travel to Hattiesburg for these services from both cities and rural areas hours away.

Low-income women will be the most affected if the Jackson Women’s Health Organization closes. “[Women] with means will go to other states [for abortions],” says Glover. “Some out-of-state clinics even offer hardship discounts to women traveling from Mississippi.”

But even with discounts, an out-of-state trip is made difficult by those states’ anti-abortion laws. Women seeking abortions outside Mississippi are most likely to go to Birmingham, Ala. or New Orleans, but both Alabama and Louisiana have laws mandating in-person counseling 24 hours prior to an abortion. That can mean a hotel stay of at least one night for out-of-state women.

If Mississippi legislators truly cared about women’s health, there’s “a whole host of things they could do,” says Movahed. “There would be fully funded Medicaid for all forms of health care. They could bring more providers to Mississippi, make the state a less hostile environment for women and doctors and increase women’s access to care.”