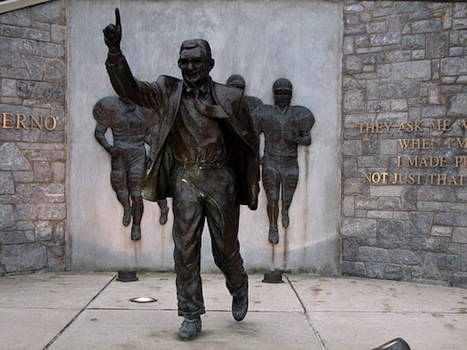 Daniel Tosh makes jokes that support rape culture and he’s defended as a “nice guy” while feminists are threatened with rape for pointing it out. Joe Paterno is accused of participating in a cover up of child rape and his “legend” legacy is defended while Sandusky’s victims are slandered.

Misconceptions about sexual and domestic violence persist, despite feminists’ best efforts to educate the public. Rapists are assumed to be scary-looking strangers in a bush with a knife, not somebody you know and trust who uses coercion and alcohol. Batterers are assumed to be unshaven, drunken criminals, not the charming person you fell in love with.

Feminist women have taught me many things. One is that sexual/domestic violence can’t occur without sexism (racism, homophobia, etc.). Sexual violence is supported by a “rape culture” that glorifies objectification and male ownership of girls and women. Sexual coercion is painted as romantic–men are not only expected to use coercion to “score,” they are pressured and punished as “unmanly” if they don’t.

Daniel Tosh tells jokes that trivialize rape and his apologists explain that it’s our fault if we are “offended,” citing free speech as his defense.  But the feminist women and men who have spoken out against Tosh’s “jokes” were not simply “offended”–they were alarmed that his actions made women unsafe. They were concerned that the “jokes” perpetuated (and benefited from) rape culture. Jennifer Pozner draws a “difference between the hilarity of jokes that undermine rape culture and the cruelty of those that normalize rape and demean victims.”

I’m less interested in the “did he or didn’t he” of this particular example of rape culture perpetuation, more the systemic effect of rape culture on rape victims, and the permissiveness and forgiveness that rape culture brings to guys like Tosh–and me.

Are men going to run out and rape women, having listened to Tosh? Probably not. But those who do rape are let off the hook by a culture that treats rape as a joke. Rape culture allows those who do rape to escape arrest, prosecution, jail time and social sanction.

The stereotypical images of rapists and batterers hurts victims. If a person’s rapist or batterer doesn’t fit the stereotype, why come forward at all?  For this reason, feminists have worked for years to tell the truth. Rapists and batterers often present quite well in public, while committing violence in private.

The stereotype of men who perpetuate and benefit from rape culture hurts victims, too. Joe Paterno did not report Jerry Sandusky’s sexual abuse, yet media coverage often focused on Paterno’s “legacy” and his coaching accomplishments. Daniel Tosh told jokes that trivialize rape, yet his defenders focus on him being “one of the nicest people in the world.” (Although the media tide is turning, particularly on Paterno).

If they can be defended by just saying, “but he’s a nice guy,” the defense becomes easy. But if someone can conceivably be seen as a “nice guy” and commit rape (and/or abuse), that defense becomes meaningless and more victims will be believed. And if a “nice guy” does things that support and perpetuate rape culture, we can insist that those behaviors be changed.

Once the “nice guy” defense is eliminated, we can look at how all men are socialized in a culture of sexism. Jay Smooth and other anti-racist activists have already urged us to look at someone’s racist behavior, instead of focusing on “is someone a racist” or not. The conversation should be about the behavior, not the person.

Men, we have a crucial role to play in this. We benefit from male privilege every moment of every day. We may not ask for it, but it’s there. So let’s use it to confront rape-supportive behavior, rape jokes and rape culture whenever we can. Let’s listen when we’re told we’ve done something that inadvertently supports rape culture, rather than getting defensive. Let’s learn from feminist women who speak and write about sexual violence and rape culture. Let’s support our local rape crisis center and state sexual assault coalition. Let’s be “aspiring allies” to feminist women, as together we work to create a world free from sexual violence.