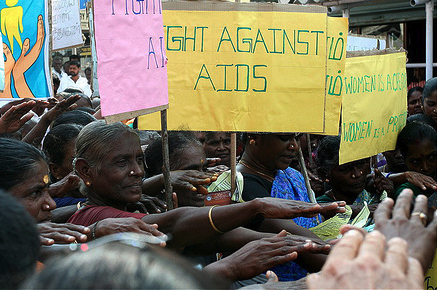 As the XIX International AIDS Conference proceeds in Washington, D.C., this week, its pertinent to note that a new report by the Global Commission on HIV and the Law, an independent body of former world leaders and top legal, human rights and HIV experts, has labeled the global response to the AIDS epidemic as “stifled” by various laws–many of those involving women.

The report, “HIV and the Law: Risks, Rights and Health,” states that “penalizing” laws are wasting funds and lives. The commission, which based its study on research and testimonies from more than 700 people in 140 countries, finds that every government in every region is guilty of not using legal frameworks in an effective way to fight the epidemic. So it urges governments to strengthen and scale up certain laws. United Nations Development Program administrator Helen Clark further explains:

Bad laws should not be allowed to stand in the way of effective HIV responses. In the 2011 Political Declaration on HIV and AIDS, member states committed to reviewing laws and policies which impede effective HIV responses. One of the key contributions of the Commission’s work has been to stimulate review processes and change in a number of countries.

In many countries, sex work is still criminalized, preventing sex workers from access to HIV prevention services. Customs such as female genital mutilation make women powerless over negotiations such as safe sex and 127 countries do not have any legislation on marital rape. Former Brazilian president Fernando Henrique Cardoso, who chairs the Commission, says that the prejudice must end:

Too many countries waste vital resources by enforcing archaic laws that ignore science and perpetuate stigma. Now, more than ever, we have a chance to free future generations from the threat of HIV. We cannot allow injustice and intolerance to undercut this progress, especially in these tough economic times.

Right here in the U.S., The U.S. President’s Emergency Plan for AIDS Relief (PEPFAR)‘s laws and policies favor funding of abstinence-only prevention programs–which we know do not work and lead to the inadequate use of condoms. And throughout Africa, condoms go out of stock because of African and U.S. governments’ ineffective distribution of them. PEPFAR also requires government grantees to abide by an anti-prostitution denying protection to sex workers, thus increasing the chance of spreading the HIV virus.

Although the commission acknowledges the role that violence against women plays in making the global HIV/AIDS response more effective, and calls on governments to use laws to end it, the report falls short of highlighting just how critical this recommendation is.

In her article, “AIDS-Free Generation? Not Without Women,” the president of the Center for Health & Gender Equity, Serra Sippel, says that the gendered impact HIV/AIDS intensified five years ago when we were not paying attention:

Women overtook men as the majority of people in the world living with HIV. They’ve held on to that majority and started to take over other areas as well: Young women ages 15-24 account for 75 percent of all new infections in sub-Saharan Africa. HIV is the number one killer of women in their childbearing years, and HIV was responsible for 60,000 maternal deaths in 2008. In the last two years, HIV infections have nearly doubled among African American women in Washington, D.C.

Sippel explains that HIV/AIDS is now a “women’s plague,” and unless our response takes that into account we will fail in creating an “AIDS-free generation.”

We have a huge opportunity to get back on the right track during the current International AIDS Conference in D.C. Commissions and organizations can continue to release their reports but, as Sippel warns, we cannot respond correctly to HIV/AIDS without addressing the majority who make up the pandemic: women.

Photo of an AIDS demonstration in Mamallapuram, India by entrelec via Creative Commons 3.0