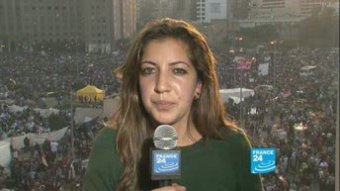 Egypt has been in relentless flux since last year, but the contempt  shown towards women remains a constant. Sonia Dridi, a correspondent for France 24 TV, was attacked near Cairo’s Tahrir Square last Friday night, reminiscent of the sexual assault CBS correspondent Lara Logan faced in February 2011 while covering the celebrations in Tahrir over Hosni Mubarak’s ousting.

Didri and her colleague Ashraf Khalil had spent the evening covering protests in the square and were shooting segments a block away when a crowd of about 30 men cornered them and began to assault them.

“The crowd surged in and then it went crazy… It was hard to tell who was helping and who was groping her,” said Khalil.

Khalil said he protected Dridi by wrapping her in a bear hug, and eventually the two escaped in a car.

Dridi tweeted the next day that she was “more frightened than hurt” and later tweeted “Thanks to @ashrafkhalil for protecting me in #Tahrir last night. Mob was pretty intense. Thanks to him I escaped from the unleashed hands.”

The AP reports that there’s been an increase in attacks against women since protesters have returned to the square in recent months. There have been incidents of sexual harassment and even stripping women of their clothes in public.

Tahrir Square has continued to be an epicenter of unrest since Egypt’s revolution, and though Mubarak is gone, competing groups are jockeying for influence. Too often now, women professionals have become a target of Egyptian male aggression, reminding us that democracy means far more than just the right to vote, but the protection of all human rights.