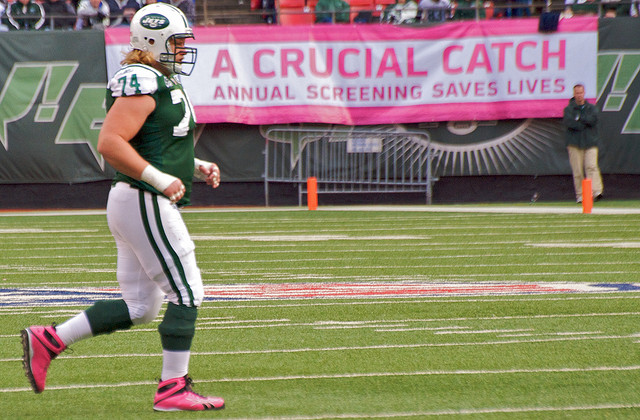 As breast cancer awareness campaigns have become more visible, and the color pink has become emblematic of survivors and those who support their struggle, I interpret the omnipresent October color as a way to mobilize social consciousness, action and hope. As a woman, I am incredibly grateful to see our national embrace of an initiative framed around saving women’s lives. I recognize that the movement against breast cancer may save my life and/or the lives of women and men that I love dearly.

Yet I would be remiss, as a biracial Black feminist, not to mention my concerns with the corporatization of advocacy, given the extensive list of products that sport pink in October. Take for example, Method “Pink Your Sink” Soap; Energizer’s “Power for the Cause”; Under Armour’s “Power in Pink” ; Delta Airline’s “Taking Flight for the Fight” and other items that have been mentioned here and here on the Ms. Blog.

Although mirroring Think before You Pink’s concerns over “pinkwashing,” I am not saying that those advocating for social consciousness should snub corporate support, given the potential benefits. Rather, I think that corporate buy-ins should be politicized.

Case in point: The National Football League’s (NFL) “A Crucial Catch” breast cancer awareness campaign reads less to me as a genuine concern for the lives of women and more as a convenient choice among “women’s” issues. This is not to undermine league employees’ personal commitments to fighting breast cancer, nor to disregard the power of seeing football fields and players, both traditionally understood to be too “tough” for pink, adorned corner to corner and head to toe in pink. There is something about the NFL in hot pink that makes me smile, and I imagine it’s both my desire to resist “pink for girls” and “blue for boys” and my understanding that one day breast cancer will likely affect me and/or people that I love.

But before the NFL, as a corporate organization deeply steeped in what bell hooks calls “white supremacist capitalist patriarchy,” receives only accolades, I want to point out that October isn’t just Breast Cancer Awareness Month but also Domestic Violence Awareness Month. And that brings forth important questions for the NFL and fans alike to reckon with:

–Why pink opposed to purple?

–Why not both, or a rotation of numerous issues that disproportionately impact women?

Stemming from my feminist consciousness, three reasons come right to mind: (1) Neither the NFL nor its personnel can be implicated in the cause of breast cancer; (2) the NFL does not want to outwardly associate men and masculinity with men’s violence against women; and (3) the NFL does not want to publicly obligate itself to hold personnel accountable for engaging in violence against women. In essence, pink was a safe patriarchal choice.

This raises a final concern that I hope sparks your curiosity as it does mine:

If the NFL is willing to forefront breast cancer awareness as an issue but has yet, in my opinion, to productively address men’s violence against women—an issue clearly influenced by men, masculinity, and hypermasculine spaces such as sport—then is pink the new color of patriarchy?

Photo of A Crucial Catch by Ed Yourdon via Flickr.

Rachel Alicia Griffin is an assistant professor in the Department of Speech Communication at Southern Illinois University - Carbondale. As a critical intercultural communication scholar, her research interests and publications span critical race theory, Black feminist thought, popular culture, gender violence, and pedagogy. She is also a frequent guest on college campuses and at conferences to present workshops and deliver keynotes that speak to how power, privilege, and intersectionality impact the ability to engage across identity differences. Most recently, she presented " Black Women and Gender Violence in For Colored Girls" on her campus; spoke at Georgetown University, Virginia Tech University, and Northwestern University; and published "The Disgrace of Commodification and Shameful Convenience: A Critical Race Critique of the NBA" in The Journal of Black Studies.