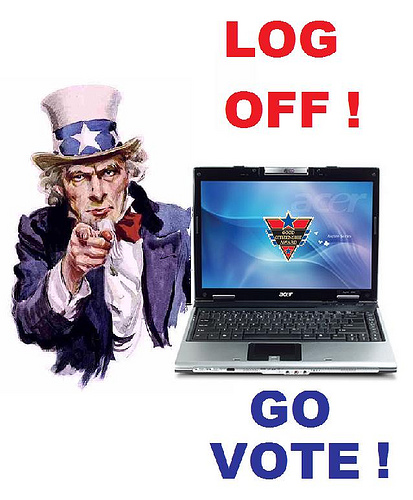 This election has been rife with tales of voter suppression strategies, from unnecessary voter ID laws to shortened early voting to disenfranchisement of felons.

The latest news out of Florida has Gov. Rick Scott refusing to extend early voting hours even as voters faced ridiculously long waits at polling places. Reported Firedoglake, “A brief effort to allow in-person absentee voting in Miami-Dade County ended with polls closing randomly and the cars of prospective voters being towed.” But Scott looked at the bright side, saying “People are getting out to vote. That’s what’s very good.”

If we may be so bold as to translate his words, what he really meant is, “I’m hoping that the long lines will discourage voters who don’t vote the way I want them to.”

In Ohio, Secretary of State Jon Husted–who also limited early voting hours–has now made a last-minute order that voters, not poll workers, will carry the burden of properly filling out their correct ID on provisional ballots. Previously, that was the poll workers’ responsibility. And it’s a very big deal to fill out the ballot correctly, because otherwise they won’t be counted. Can you spell “voter suppression”? Here’s how the Huffington Post explained it:

An emergency injunction has been filed against Husted’s directive. Husted has already gotten an Ohio court order that allows him to  throw out “wrong polling place, wrong-precinct” provisional ballots, even when its the poll worker’s fault that a voter cast her ballot at the wrong place.

The Center for American Progress has pointed out that, while voter suppression disproportionately affects people of color, it’s women of color “at the center of this dual disenfranchisement”–or, as the center’s headline puts it, current efforts to suppress votes are “Where the War on Voting Meets the War on Women”:

Nearly 1 million [pdf] women of color may be turned away from the ballot box this week—and [denied] the ability to voice their opinions and hold their representatives accountable on the reproductive health issues about which they care the most.

This is particularly true in Florida, where the state’s new voter identification law may disenfranchise up to 341,203 women of color this Tuesday. When these women are turned away from the polls, not only will they be denied the opportunity to vote for elected officials, but they also will lose the opportunity to weigh in on ballot initiatives such as Amendment 6, which would withhold state funds from abortion care or coverage and would narrow privacy protections in the state constitution.

What can one do to combat voter suppression?

First of all, STAY IN LINE at your polling place until you’re allowed to vote. Many states, but not all, allow you to vote as long as you’re in line when the polls close.

Secondly, insist on a PROVISIONAL BALLOT if there’s any question about your registration.

And thirdly, bring your camera or smartphone to the polls and DOCUMENT any problems you or anyone else may have in casting their ballots. Also, check out Election Protection for more tips on reporting voting difficulties.

Polls show the possibility of a very close election. Make sure YOUR vote counts.

Photo from Flickr user Thruhike98 under license from Creative Commons 2.0