Winning Her Own Marathon - Ms. Magazine
Skip to content 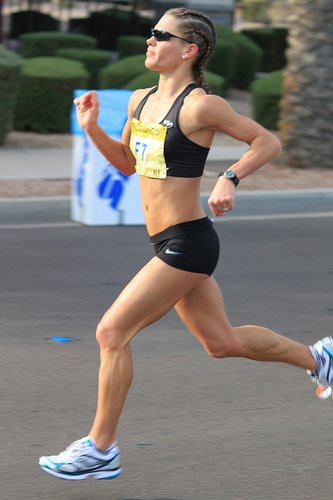 Though the cancellation of yesterday’s New York City Marathon was difficult
for the 20,000-some women registered to run, at least it was understandable. Forty years ago, women were barred from starting the race due to sexism, not the aftermath of a hurricane. But thanks to the efforts of Nina Kuscsik, that exclusion was soon history.

In 1972, Kuscsik staged a sit-in at the start of what was then the third running of the now-famous New York race. The protest–in the same year that Congress passed the Equal Rights Amendment, Title IX became law and Ms. was founded—would notch another milestone for women’s equality, as it secured women’s right to race.

The story of the little-known demonstration is told in a deeply reported piece in the November issue of Runner’s World magazine. It details Kuscsik’s unlikely role as protest ringleader. A Long Island wife, mother and budding distance runner, Kuscsik more interested in racing than feminism’s Second Wave–but her actions were undoubtedly feminist in spirit. In 1969, prohibited from competing by the Amateur Athletic Union (AAU), running’s governing body at the time, Kuscsik ran the Boston Marathon unofficially, jumping onto the course near the start. She did the same in 1970 and 1971.

After three unofficial finishes, Kuscsik was irritated. It seemed absurd that women were not allowed to compete. More absurd were the falsehoods women were being told—that distance running might lead to infertility, or cause their uteruses to fall out.

So Kuscsik lobbied the AAU to abolish its bias treatment of women. She had partial success. It agreed that “certain women” could run a marathon, thus allowing women official entry into the New York City event and other races. But there was a catch: women had to start 10 minutes before the men—a “separate but equal” solution.

Seeing the revised rule for what it was—further discrimination—Kuscsik, along with the race’s founder, Fred Lebow, devised a plan to embarrass the AAU. When the gun sounded at the start of the women’s race in 1972, Kuscsik and five other women (the entire women’s field) sat down on the starting line. Kuscsik held up a hand-written sign that read, “The AAU is unfair.” The other women also held signs denouncing the group.

Though seeing a woman out running wasn’t a common sight in the early ‘70s, women were running races, finishing marathons. Not only were their uteruses intact, they were beating some of the men. The general consensus seemed to be, why not make it official? Like today’s push for marriage equality, inclusion was inevitable.

The protest was covered by the The New York Times, and shortly thereafter Kuscsik went to the AAU’s convention armed with a lawsuit. The rule was dropped.

Kuscsik continued to push for women’s equality in sports. After the ’72 sit-in, she turned her attention toward getting a women’s marathon into the Olympics, a fight that took nearly a decade. Last week, in the buildup to what would have been marathon weekend, Kuscsik, now 73, was inducted into the New York Road Runners Hall of Fame.

Kuscsik’s work built on the bravery of other pioneering female runners, such as Jacqueline Hansen, Julia Chase-Brand and Katherine Switzer. The latter is famous for having been manhandled by a Boston Marathon race director who tried to remove her from the course (and she’ll be featured, along with Ms. founder Gloria Steinem and other groundbreaking women leaders, in the forthcoming documentary film MAKERS: Women Who Make America, which will air in early 2013.)

From the six women ready to run the New York Marathon in 1972–two percent of the total racers–approximately 40 percent of the 47,000 runners who were registered to compete in the marathon yesterday were women. That gibes with national figures, as women comprise roughly 41 percent of total marathon finishers in the U.S. these days. Last year, seven million women finished a road race.

And they can thank women such as Nina Kuscsik for giving them the opportunity.