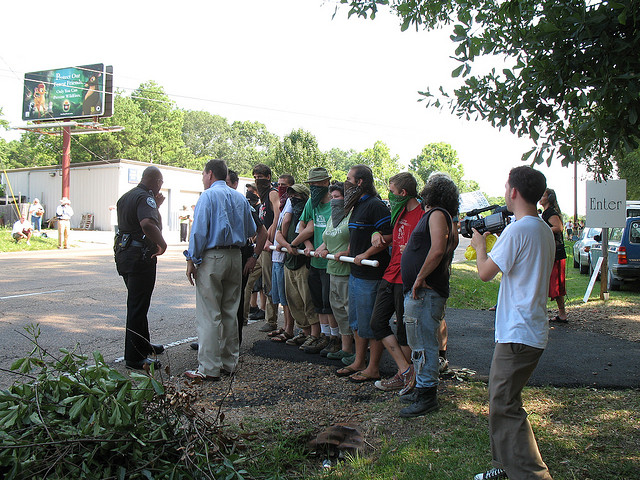 When Ms. last spoke with Diane Derzis, director of Jackson Women’s Health Organization in Jackson, Mississippi, she was “forging ahead” in her battle to keep the state’s last abortion clinic open. That battle continues today, as the clinic’s physicians have been denied admitting privileges at seven hospitals in the area—and having those privileges is a new requirement created with the intent to see Jackson Women’s Health Organization closed for good.

The fate of JWHO and the constitutional right for women to end a pregnancy in Mississippi has been threatened by anti-choice lawmakers—and hospital administrators—since April of this year. HB 1390, the state’s latest TRAP law, requires that doctors who perform abortions be board certified and have admitting privileges at a local hospital—an unnecessary roadblock designed under the guise of protecting women from abortion procedure-related complications. JWHO’s physicians were already board certified at the time the law passed, but securing admitting privileges was nearly impossible.

In July a federal court intervened, allowing the law to take effect while granting JWHO an injunction to remain open without penalty. The deadline to secure admitting privileges was extended, but doctors still found little success. According to the Center for Reproductive Rights—representing JWHO and Dr. Willie Parker—some hospitals even refused to process the applications because of their “biased policies and practices toward abortion.”

The Center for Reproductive Rights reentered federal court on Wednesday to request a preliminary injunction to stop the state from enforcing the law while a lawsuit challenging the law is resolved. The clinic is suing to overturn the law as an unconstitutional burden on the right to abortion.

Nancy Northrup, president and CEO of the Center for Reproductive Rights, said Wednesday in a statement:

Anti-choice politicians were very clear that they had one in thing in mind when they passed this law: to shut down Mississippi’s only abortion clinic … Mississippi women have the same constitutional rights as any other women in the United States—they deserve far better than to be forced to travel hundreds of miles to another state to get a safe, legal medical procedure.

The Jackson Women’s Health Organization has long been the site of anti-choice harassment on both the grassroots and state level. Residents say the clinic receives a steady camp of protesters, lining their chairs and signs along the sidewalk each day. The clinic has been providing its services for 17 years, and has been the only abortion clinic in Mississippi since 2002.

Derzis, who took over the clinic in 2010, has become something of a pro-choice hero; she has been nicknamed the “Abortion Queen” by both her supporters and her foes. Having worked in abortion clinics in the South since the ’70s, she has weathered many storms, from clinic bombings to a slew of legal battles. In addition to Jackson Women’s Health Organization, Derzis was also the owner New Woman All Women in Birmingham, Ala., until the state health department closed the clinic last May. Derzis tried selling that clinic so it can re-open—Alabama only has a handful of abortion clinics—but the case is still tied up in litigation.

The pressure on Derzis from anti-choice opponents also extends to the doctors, many of whom are brought in from out of state as a safety precaution. Parker, for instance, also performs abortions in the Washington, D.C. area, Philadelphia and Alabama. The hostile atmosphere toward doctors and clinic workers certainly didn’t help in their bid for admitting privileges. One hospital told JWHO and the Center:

The nature of your proposed medical practice would lead to both an internal and external disruption of the Hospital’s function and business within this community.

Mississippi also has a law on the books that grants hospitals the right to refuse any medical service, including admitting privileges, on religious grounds.

In a state with the highest rates of teen pregnancy and poverty, and with 21 percent of its population uninsured, lawmakers should not be using women’s health and livelihood as political pawns. Without JWHO, Mississippi women seeking abortions will face a number of burdens as they try to attain a constitutional—and human—right. An “abortion-free” Mississippi means women will have to travel to Birmingham or New Orleans for an abortion—problem is, Alabama and Louisiana both have 24-hour waiting periods, requiring two clinic visits and a likely overnight stay. Women who cannot afford to travel or take multiple days off from work for the procedure might be left without a choice. Though Gov. Phil Bryant declared last Spring that he was trying to somehow protect women with this bill, history tells us that women without the right to choose are driven to dangerous, uncontrolled and even self-inflicted measures.

If JWHO is forced to close, it’s not only access to abortion that women will lose: JWHO also provides comprehensive women’s health care, including gynecological exams, pap smears and birth control. Losing JWHO means losing an un-biased family planning center in a state that currently houses 45 crisis pregnancy centers and just one Planned Parenthood (located about three hours from Jackson in Hattiesburg).

It’s hard to believe that these endless attacks on women’s reproductive health and bodily autonomy is happening when we’re only two months away from celebrating the 40th anniversary of Roe v. Wade. Though there have been some recent pro-choice victories, including the fetal heartbeat bill in the Ohio Senate, an appalling anti-choice and anti-woman ideology still pervades. Clinics for low-income women continue to close in states from New Jersey to Texas because of slashed family planning funds. And in nearby Birmingham, just days after Derzis got the news that New Woman All Women will remain closed, a new attack was launched by anti-choice organizations on the Planned Parenthood clinic there.

But if this last election taught us anything, it’s that women certainly do not want their health care, their reproductive systems and their lives dictated by anyone except themselves and their chosen medical practitioners.