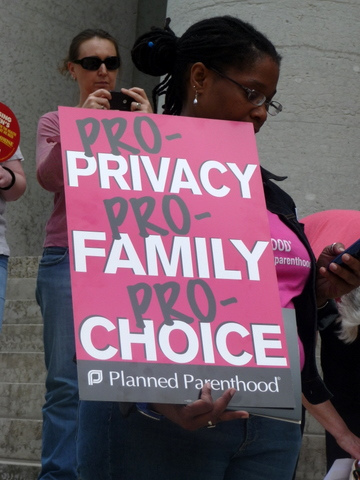 Last week, the Michigan Senate passed a slew of measures intended to make it even more difficult for women in the state to access and pay for abortions. Bills 612, 613 and 614 [pdf] if enacted by the state’s House, will ban abortion coverage by any private or state-based health insurance plans unless the woman’s life is in immediate danger. These bills do not provide exceptions for instances of rape, incest or health-jeopardizing pregnancy complications, so should a woman need to terminate her pregnancy for any of these reasons she would not receive financial assistance from any insurance provider in the state.

This decision is the most recent in an ongoing anti-abortion blitz from Michigan legislators. Over the summer, Rep. Bruce Rendon (R-Lake City) launched three bills known as the anti-abortion “Super-Bill.” The bulk of the package, HB 5711, is expected to pass the House next week–it would prohibit abortion by medication and enact a series of expensive and unnecessary TRAP laws mandating specific physical plant requirements that could shut down most abortion clinics in the state.

At the end of November, Michigan lawmakers went even further, introducing legislation that would establish a tax credit for fetuses 12 weeks and over–a thinly veiled attempt to establish personhood for fetuses. The latest decision further exemplifies the interest certain Michigan politicians have in imposing their personal beliefs about abortion on everyone else.

Though Michigan lawmakers actively dismissed women’s rights in their recent vote, they did take care to protect so-called religious freedom: The Senate also passed Bill 975, a measure intended to “protect religious liberty and rights of conscience in the areas of health care and medical and scientific research” by allowing employers, doctors, nurses and pharmacists to object to providing medical services to which they are morally opposed (read:birth control and abortions).

The Michigan House now will consider these four bills. In the midst of a damaged economy, it would be nice if Michigan legislators focused on other things besides further restricting women’s healthcare and interfering with their private medical decisions. State Sen. Coleman Young II (D-Detroit), when criticizing his Republican colleagues for continuing to push extreme anti-abortion legislation, sums up our thoughts well:

Get the government from underneath women’s clothes. We’ve already had this conversation. Obama won, Romney lost, get over it.