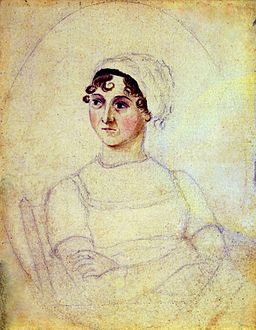 Jane Austen was born on December 16, 1775, and in her 41-year life produced literary works that have enjoyed mass popularity and acclaim that only increases over time.

Two hundred years ago, as she enjoyed her 37th birthday, Austen would have been anticipating the publication of her second novel, Pride and Prejudice, arguably the most famous of her works, with Elizabeth Bennet ranking as one of the best-loved heroines in all of English literature. Celebrations of the novel’s anniversary will commence in earnest on January 28 of next year, the date Pride and Prejudice was published,  and so, too, no doubt, will countless  essays and articles that incorporate the famed opening line, “It is a truth universally acknowledged.”

Most likely much of the attention will focus on Austen as a writer of romances. Each of the novels concludes in marriage, after all, and the marriage of Elizabeth to Mr. Darcy is a particularly happy ending. We should also pay tribute, however, to Austen’s early adoption of feminist ideals and her insistence that women’s voices and experiences be taken seriously.

As someone who has taught Jane Austen in undergraduate classrooms for the past two decades, I have found that Job One is getting students past a widely held view that her novels are trivial love stories written for a silly female readership. When we look closely at the messages of Austen’s novels, we can see that she consistently rejects ideas about women’s inferiority to men and challenges the system that disenfranchises women. That phrase, “It is a truth universally acknowledged,” calls into question the concept of “universal” knowledge, and in emphasizing the female point of view–albeit that of middle- and upper-class white British characters–Austen invites readers to pay attention to women’s issues.

To celebrate Jane Austen’s birthday in feminist style, here are five “footnotes,” highlighting the feminism to be found in her writings:

1. On solidarity among women:

Alas! If the heroine of one novel be not patronized by the heroine of another, from whom can she expect protection and regard? I cannot approve of it.  — Northanger Abbey

In this excerpt from a well-known passage (commonly referred to as the “defense of the novel”), the narrator steps forward to defend novels as important works of literature, identifying the genre with women writers and female protagonists and, in the process, criticizing those who view women’s literary productions as trivial. The defense singles out novels by fellow authors Frances Burney and Maria Edgeworth as examples of works “in which the greatest powers of the mind are displayed, in which the most thorough knowledge of human nature, the happiest delineation of its varieties, the liveliest effusions of wit and humor are conveyed to the world in the best chosen language.” Required reading for anyone who has wondered why “chick lit” is a term of disparagement.

2. On sexist ideas about women’s education:

A woman especially, if she have the misfortune of knowing any thing, should conceal it as well as she can. I will only add, in justice to men, that though to the larger and more trifling part of the sex, imbecility in females is a great enhancement of their personal charms, there is a portion of them too reasonable and well informed themselves to desire any more in women than ignorance. — Northanger Abbey

Here, the narrator slyly dismantles the cultural bias against women’s learning. Conservative conduct book writers in 18th-century England actually advised women to hide their knowledge, lest they overwhelm or intimidate men. This satirical statement is typical of Austen’s feminist humor. (Something I explore at greater length in my book Laughing Feminism.)

Do not consider me now as an elegant female intending to plague you, but as a rational creature speaking the truth from her heart. — Pride and Prejudice

When the foolish and bombastic Mr. Collins proposes to heroine Elizabeth Bennet, he won’t take no for an answer. In fact, his absurd ideas about women who say no when they mean yes–typical of a culture that values female timidity and encourages inauthentic behavior in courtship–prevent him from hearing her many clear statements of rejection. In this speech, Elizabeth, at her wit’s end, demands that she be recognized as a “rational creature,” claiming one of the principles of enlightenment thinking and revolutionary rights-of-man discourse and opposing nonsensical ideas about “elegant females” who cannot say what they really mean.

4. On the perils of limiting women to the domestic sphere:

We [women] live at home, quiet, confined, and our feelings prey upon us. You [men] have aways a profession, pursuits, business of some sort or other, to take you back into the world immediately, and continual occupation and change soon weaken impressions. — Persuasion

These words, spoken by heroine Anne Elliot in a discussion about whether men or women are more constant in loving, compare women’s confinement with men’s agency and activity and more than imply that women would benefit from getting out and doing more. When you hear people talk about the sentimentality of Austen novels, consider that this declaration, spoken in the presence of Anne’s loved-and-lost hero Captain Wentworth, helps to bring about the novel’s resolution. She is not passive here; her speech inspires him to renew his declarations of love. Incidentally, Anne is quite likely to join her husband when he next ventures out to sea, rather than remaining home to be plagued by her feelings.

5. On biases against women in books:

[I]f you please, no reference to examples in books. Men have had every advantage of us in telling their own story. Education has been theirs in so much higher a degree; the pen has been in their hands. I will not allow books to prove any thing.  — Persuasion

In that same speech, Anne Elliot speaks out against evidence of women’s inconstancy as depicted in literature. The obvious criticism of male advantages and female deprivations contributes a significant literary example to counter those books that do not “prove any thing” about women’s character. Northanger Abbey‘s protagonist Catherine Morland also noted that history books typically contain “hardly any women at all” and thus declared that “a great deal of it must be invention.”

This list is, of course, far from complete (feel free to add your own examples!). The tendency of much of Austen’s writing is to put women in the spotlight and to give them their due. She seldom proselytizes. Instead, she shows middle and upper-class women in action, coming into their own within a society that offers them few avenues for exertion.

As we commemorate Austen’s 237th birthday and look forward to the Pride and Prejudice bicentennial, let’s also honor her contributions to the history of feminism. “Let us not desert one another,” the narrator of Northanger Abbey admonishes sister writers in the defense of the novel, continuing, “We are an injured body.”

Next time you hear someone dismissing Jane Austen’s work as “chick lit,” send them back to her books for some feminist schooling.

Drawing of Jane Austen by her sister Cassandra from Wikimedia Commons