Thinking About the Steubenville Rape and Raising a Son - Ms. Magazine
Skip to content

My son was born in November and, like most parents, questions about his future ran through my mind: Who would he love? What would he do? How long would his head be the shape of a traffic cone? There was one question that never traveled through my mind in those first few weeks: How do I prevent my son from becoming a rapist? But that was the question that I asked myself again and again when I read The New York Times‘s story about the Steubenville High School football team rape case.

Maybe this strikes some as a ridiculous question to ask while holding a newborn; maybe it strikes others as incredibly short-sighted for a self-identified feminist to never have thought about before. But regardless, I was floored by the sudden realization that I not only had to teach my son that consent is never nebulous—it is a very clear and multi-part process—but I also had to prepare him to navigate a rape culture which is so ingrained that it seems to consistently reward its preservationists. How do I teach my son to resist the pervasive attitudes about rape and victim-blaming when they’re echoed by men in positions of authority? The Steubenville rape case struck a chord because it crystallized the very problems with the ways in which we approach the discourse on rape. That is to say that we’ve so normalized violence against women that a 16-year old girl could be dragged unconscious from party to party and repeatedly assaulted by two football players while her peers laughingly chronicled her assault on social media, only to find herself blamed by coaches, city leaders and school administrators.

Certainly the subculture created around the Steubenville High School football team—one of blamelessness and deep entitlement—is partially to blame. But as feminists charged with raising future generations of young men, we are obligated to deconstruct the larger structures which allow subcultures like this to exist. While the video circulated by the hacktivist group Anonymous is repulsive, we shouldn’t be surprised by its content: Male athletes on a variety of Steubenville’s varsity teams joke about the rape they witnessed and the unconscious state of the victim. Not a single one attempted to stop what was happening. These young men are a near-literal manifestation of the rhetoric of rape culture; a rape victim is little more than a punch line to be tweeted about and her victimization is as intangible as an internet curiosity or a hashtag.

Perhaps even more disturbing than the tasteless jokes which punctuate the video is the simultaneous defense of violence with its justification. At one point, former Steubenville baseball player Michael Nodianos says, “It isn’t really rape because you don’t know if she wanted to or not.” At another point an unidentified boy asks “What if that was your daughter?” Nodianos responds, “But she isn’t.”

Nodianos’s words are telling, because for too long we’ve been teaching our sons to think of the consequences of rape within a familial context (i.e. “Imagine if it were your wife/daughter/mother”) and it’s clear that this method of education is a complete and total failure. Boys shouldn’t be taught that only women to whom they are genetically bound are worthy of being treated as human beings because, in part, that implies those who are not family are subhuman and therefore deserving of their own victimization. Nodianos’s justifications (akin to “she never said no”) and answers might be chilling, but they’re also relatively rational responses to the phrases we repeat to boys and consider enough education. No, of course, means no, but such language implies that the absence of a firm and loud “no” is the presence of “yes.” One has to look no further than the recent onslaught of “forcible rape” legislation to see the pernicious failure of the oft-repeated phrase.

In the absence of real education about consent, we repeat these phrases to our sons perhaps because they’re easier both for us and for them; emptily repeating a mantra doesn’t require that boys actually think about consent, and it allows them to elide responsibility for their own actions.  Indeed, victim-blaming is part and parcel of these rationales: Your daughter/sister would never wear that skirt, or walk on the street alone, or have a drink. Take, for example, Steubenville volunteer football coach Nate Hubbard who, when interviewed by The New York Times, said:

The rape was just an excuse, I think. What else are you going to tell your parents when home drunk like that and after a night like that? She had to make up something.

Hubbard’s words, though repulsive, are all too common. Reading those words—uttered by a man in a position of authority over high schoolers—made me realize that educating my son about consent is not enough. I will also have to equip him with the skills to recognize rape culture and the rhetoric which continues to disseminate it. Hopefully, I can also teach him that “excuses” like Hubbard’s devalue everyone—not only does it blame the victim, but it also assumes that all boys are inherently rapists, unable to treat women like human beings.

As I hold my son, now almost two months old, I realize I’m not sure how to have these conversations with him. Though I’ve spent most of my adult life as an advocate for victims, I feel woefully underprepared to educate my son without simply saying “no means no.” A few days ago Jezebel’s Katie J.M. Baker asked:

Wouldn’t it be amazing if this case went down in history as a turning point in rape culture history? Perhaps we’ll tell future generations that, after Steubenville, more parents started educating their kids about consent, college students stopped thinking their peers were “asking for it” by going out to bars, police and cities started prioritizing sexual assault cases and fewer people thought that a teenage girl is ready and willing when she is actually just unconscious.

And yes, it would be amazing, but we need to do more than just “flip the script,” as some have suggested.  We need to throw out the script and rewrite it. This is a conversation that shouldn’t just happen between mothers but rather should take place in the larger feminist community because we all (parents and those without children) have a stake in creating a new cultural curriculum.

Don’t Blame Babies (or Their Mothers) for Climate Change 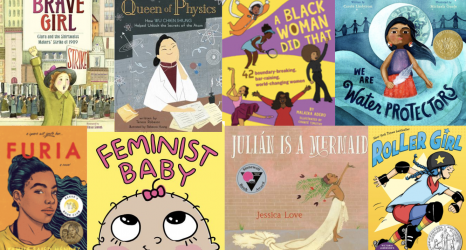 The Future is Feminist: 10 Books to Start Your Feminist Children’s Library at Home