A Literary Canon of Dudes - Ms. Magazine
Skip to content

I’m trying to lean in, Sheryl Sandberg, I swear, but this month–ironically, Women’s History Month–football players, military men, and popes have stricken me with patriarchy fatigue.

March started out on a high. I got to attend the “best literary party ever invented,” as the Association of Writers and Writing Programs Vice President and 2013 conference chair Judith Baumel dubbed it. Thirteen thousand attendees in Boston made this the biggest AWP conference ever.

My high lasted all day, ignited by an homage to feminist poet Adrienne Rich, who died a year ago. The panel talked about how Rich pushed beyond the status quo to the “dream of a common language.” I soaked in her words, and in my notebook I wrote in black Sharpie something poet panelist Kimiko Hahn said: “I never outgrow disbelief and outrage.”

By the time I entered the enormous John B. Hynes Veterans Memorial Auditorium that night to hear the keynote address–a conversation between Nobel Laureates Seamus Heaney and Derek Walcott moderated by poet and critic Rosanna Warren–I had fallen in love with literature anew. I nodded a lot when Warren said that Heaney “never turned his eye from the savage or the horrific;” when Walcott maintained that poetry comes out of silence; when Heaney said that one has to be able to dwell in clamor in order to write.

The sage elders reminisced about how Heaney met his inspiration, Robert Lowell, a man known for manic rages, and how Joseph Brodsky had an intolerance of idiocy. Warren was their cheerleader, prodding them on about their influences, and they named them one after another: Lowell, Hopkins, Auden, Pound, Eliot, Brodsky, Joyce, Virgil and Homer.

I stopped nodding after a while and fidgeted in my seat until I realized what was vexing me, what always vexes me: bald, unapologetic patriarchy. It was the conclave all over again. Vatican City plunked down in Hynes Auditorium. It wasn’t bumptious, hubristic. It ran much deeper than that. It was simply an assumption: When we talk about literature, we talk about male writers. Not even a token bone was tossed, as is almost inevitably the case, to Emily Dickinson by either moderator or laureates. Rosanna Warren did not ask the question that burned inside me: Which women writers influenced you? No Q&A followed, because I promise you, Sheryl Sandberg, I would have leaned into that question even though those around me seemed aglow with the winning words of the men on the stage.

I’m used to this, of course. I’ve spent enough time in academia to know about implicit bias, but I also know that Adrienne Rich would have wanted me to ask that question, poke at the status quo. Rather, the gentlemen poets left the stage, and I left with the all-too-familiar feeling of being alone in my pique.

The personal became political when I leaned into VIDA: Women in Literary Arts, an organization whose mission is to deepen and expand the conversation about gender inequities and to celebrate women’s writing. Says Erin Belieu, Co Founder of VIDA,

I’d like to say that the way the discussion went in the keynote is unusual, but unfortunately it’s not. There is still an assumption when we discuss literature we’re primarily talking about the work of men. Such quality of conversation still represents the norm in the media and academia. It just goes to show you how absolutely acceptable it is to treat women in literature as secondary or even completely invisible.

At the AWP session entitled “Numbers Trouble: Editors and Writers Speak to VIDA’s Count”–the first organized discussion about VIDA’s annual survey of women’s bylines and what it means to women writers nationally—I learned that the numbers have gone from bad to worse in the last three years. The 2012 statistics are maddening: The Atlantic magazine has 16 men and 4 women book reviewers; they reviewed books by 20 men and 11 women writers; they gave bylines to 176 men but just 47 women. The Nation‘s numbers are 66/24 in men/women reviewers; 92/27 in reviews given to men’s books vs. womens; and 393/156 men vs. women in bylines.

Need more evidence of the gender disparity? Harper’s magazine had 28 men review books but just 3 women; 54 books by men were reviewed but just 11 by women; and while 76 men got bylines, only 17 women did. The New Yorker bylined 160 women—and 445 men. Finally, The New York Review of Books reviewed a whopping 89 books by women—but 316 by men; it employed 40 women reviewers—but 215 men; and it gave bylines to 36 women—just over a quarter of those that men to 121 men. And this is the tip of the iceberg; for more of the VIDA Count, go here.

What is this, a “literary canon of dudes?” asked one unidentified woman in the session.

Katha Pollitt, columnist for the Nation, admitted that some editors are hostile to this very conversation about gender. They never consider it. “We just publish the best things,” they say. Some editors, however, like those at Mother Jones, have a policy of publishing a 50/50 gender ratio. Editors, Pollitt said, must ask questions about their submission pools. If they are not getting more submissions from women, they must stop and ask why.

The conversation is presently stuck at the ‘women should submit more’ stage, but people don’t like to think about what the environment they help create does to those who swim in it. It’s a kind of conservative, ‘pull yourself up by your bootstraps’ mentality that barely veils the idea that everything male writers have achieved hasn’t been through their own sweat on an even playing field. The playing field isn’t even, but women should ignore that the game is rigged and just keep playing? I guess women are supposed to just keep banging their head against the wall, despite their strong sense and evidence that it’s mostly futile, and hope that they eventually knock a hole in it? Kind of purposefully punishing, I think. I think people like Rob Spillman at Tin House are doing the right thing to say ‘We actually want women writers. This genuinely matters to us.’

Each year, VIDA says, female bloggers bemoan the depressing Count. Male bloggers don’t touch it. But VIDA charges us all to not remain passively unhappy. Do something! Like this:

I am leaning in, Sheryl, no longer fatigued, never outgrowing disbelief and outrage. In the 90 minutes that three revered poets could not utter the name of one female writer it became political. For Women’s History Month, I am cancelling subscriptions, purchasing new ones, emailing editors and teaching more women. Status quo, status schmo.

Image of painting from Wikimedia Commons 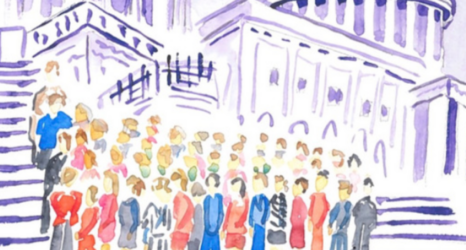 Why Sheryl Sandberg Is Applauding This Detergent Commercial