Sugar has been one of the world’s most desired commodities since the 19th century, when it went from being a luxury item to a product of mass consumption. The demand for sugar fueled the trade in human beings to cultivate it. Abolitionists, especially English protofeminists, deployed the term “blood sugar” to try to curb the appetites of sugar consumers by making them conscious of the slave labor that produced it. By equating the consumption of sugar to “eating the other”—to borrow a phrase from bell hooks—anti-sugar campaigners reduced sugar eaters to cannibals who relied on flesh to sustain their cravings. These (brown) sugar cravings resonate in yet another way when we recall the sexual exploitation of black enslaved women by white masters of sugar plantations.

Artist Kara Walker’s exhibit “A Subtlety or the Marvelous Sugar Baby, an Homage to the unpaid and overworked Artisans who have refined our Sweet tastes from the cane fields to the Kitchens of the New World on the Occasion of the demolition of the Domino Sugar Refining Plant” closed on July 6, yet it remains a remarkable tribute to the history of sugar production and its reliance on manual and sexual labor. As conversations and teach-ins continue about, conference panels form around, and a digital archive-in-the-making attests to the significance of Walker’s piece, it’s important to continue reflecting on what the past of slavery—and particularly what I think of as slavery’s “sexual geographies”—tells us about our present moment. The Marvelous Sugar Baby is about memorialization, but it’s also a not-so-subtle reminder of the ways that class, sexualization, race, spectacle and consumption shape our present interactions and continue to define American culture.

Set in the soon-to-be demolished Domino Sugar Refinery and commissioned by Creative Time, a New York-based nonprofit that has presented other works in site-specific locations, A Subtlety is Walker’s first large-scale public sculpture. Similar to the grand cut-paper silhouettes Walker is most known for, A Subtlety invokes the racial and sexual history of antebellum slavery. But unlike the flat shadowy figures that splatter ink-black plantation scenes across white museum walls, the Marvelous Sugar Baby is three-dimensional, a monumental 35 feet high and 75 feet long, and blindingly white. The whiteness of the sculpture seems contrary to its pronounced African features. Indeed, A Subtlety is “refined,” bleached from brown to white, but also refined in the sense of “elegant.” The sculpture’s whiteness appears even more brilliant against the factory’s molasses-covered cavernous interior and in contrast to the 15 small, caramelized basket-laden servant boys that form a path to the sugar-coated sphinx.

Named for medieval era sugar sculptures, Walker’s A Subtlety is a kind of “New World sphinx,” the artist tells The Brooklyn Rail‘s Kara Rooney —“A New World thinking of the sugar plantations, the Americas, the trans-Atlantic slave trade, that sort of Rolling Stones-y brown sugar dovetailing of sex and slavery as it reaches the American imagination.” The kerchiefed sphinx resembles the “Mammy” figures of southern American plantation nostalgia. Her large exposed breasts that spill out between her outstretched fists further recall black women’s nursing of white women’s children. Like sugar, black women’s breast milk provided sustenance for a slave economy. Yet A Subtlety is not one of the jolly-faced, faithful mammies used to market pancakes or circulated as cookie jars or other “negrobilia.” Walker’s towering replica of a servant has the regal presence of a queen. Like the sphinx of Giza, she inspires a kind of reverence.

If her high-held head signals power and authority to some, her arched, feline posture represents subjugation to others. But that’s only if we presume that a crouched ass-in-the-air, vulva-displayed (receptive?) pose is inherently “submissive.” The ass of the Sugar Baby seems to be at the seat of most of the controversy surrounding the sculpture’s reception. From comparisons to the Venus Hottentot to the voluptuous models that line the pages of Straight Stuntin magazine, the sphinx’s rear elicits a plethora of conflicting interpretations, Walker told a live audience at the New York Public Library. The position of compliance competes with a celebration of a juicy bottom. “And it’s also kind of mooning … everybody,” Walker jests in her conversation with Radiolab’s Jad Abumrad. She adds,

And there’s her 10-foot vagina, which is not something that happens in art often enough, I don’t think. So it’s all of these problems of display and ownership and self-possession and again this gesture [the figa gesture of the sculpture’s left hand], the kind of proverbial ‘fuck you’ to ‘I’m just gonna do that because that’s what I have, this is what I’ve got to work with and there are enough phallic symbols in the world so why not have this.’

If the vulgar and immature Instagram photos of viewers in sexually suggestive poses with the sphinx are any indication, a lot more vaginas will have to be cast before the broader public engages women’s sexuality and particularly black women’s sexuality—as a site of exploitation as well as a site of pleasure—in any complex way. While there isn’t one “appropriate” way to consume the Marvelous Sugar Baby, some viewers, several of whom were people of color, took great offense to the proliferation of lurid photos (under the #KaraWalkerDomino tag) and responded with shows of protectiveness, rage and even public assemblies of resistance. Stephanye Watts expresses in her Gawker article how her feelings went from sadness to anger as she became increasingly incensed by white patrons’ (mostly) disrespectful comments and photos. Her experience left her,

feeling super overprotective of black artists. I want to put my performance artist hat on and shroud every piece of black work in the world with a drape and a sign, reading ‘For mature and reverent eyes only. Disrespect will not be tolerated.’ As a people, we are discounted, ignored and mistreated on a daily basis by this country. Can we at least protect that which holds our stories and our legacy or are we left powerless like our forefathers when massa was yelling for our mama’s sweet lips and sugar tits?

Watts’ protective impulse is understandable, yet part of the risks and the rewards of public art is that it opens up the artwork, and even the artist, to all kinds of reactions and interactions, some anticipated and others unexpected and upsetting. Nicholas Powers, a black professor who scolded some photo-snapping visitors for “recreating the very racism this art is supposed to critique” thought Walker or Creative Time should have taken more curatorial responsibility for such a provocative piece:

[W]hat do you expect will happen if you put a giant sculpture of a nude black woman, as a Mammy no less, in a public space?

To be fair, several of Walker’s interviews and Creative Time’s site provide information about inspirations for the artwork as well as commentary on the traumatic history of the sugar trade that visitors could read before witnessing the piece, but, as Alyssa Rosenberg notes,

For some people, visiting the exhibit is an intentional choice to witness that history. For others, like the woman who stood in front of me in line, it was simply an opportunity to do something that had an air of excitement attached to it.

The artist and the curators can’t feed sugar’s bitter history to the exhibit’s visitors any more than they can dictate how the artwork should be interpreted.

I first saw the Sugar Baby on May 10 when the exhibit opened, and I went two other times since then. My friend Patricia Matthew (another black woman professor) and I played “count the black folks” as we waited in a long line filled with a predominantly white art crowd. Similar to Stephanye Watts, our encounters with the space and the sculptures was markedly different from some of the other patrons. Tricia and I exchanged many knowing glances and talked about the eerie sadness of the candy boys—some of whom have since disintegrated—while several visitors snapped photos of their children with the dark sticky relics of slavery. I stood in awe of the radiant sphinx and slowly made my way around her. The sheer magnitude of it made me want to capture it on my iPhone’s camera. I was actually surprised by some people’s suggestive poses in front and especially in the back of it. They bore an uncanny likeness to some of the 19th century prints of Sarah Baartman, the so-called “Hottentot Venus.” “Oh,” I thought, “this, too, is part of the display.”

In the Los Angeles Review of Books, Francey Russell suggests that Walker’s sphinx, like her ancient Greek predecessor, calls upon viewers to see themselves as the answer to the riddle’s question:

We might thus see Walker’s Sphinx as demanding this kind of attention to forms of recognition and self-recognition. Her secret is us, and her demand is that we see this. So the myriad ways of being present to this work—the reverence and the seriousness, the waves of feeling and the callous childishness and irresponsibility—these can all be seen as modes of response to this demand.

What are possibilities of recognition—of self and of another—in a culture that construes sex and race as spectacle?

The June 22 event “The Kara Walker Experience: We Are Here,” organized by a group of New York artists and writers, sought to disrupt the dynamic of black femaleness as spectacle by gathering a critical mass of people of color (over 1,000 responded to the Facebook invitation) to experience Walker’s exhibit as a majority. I spoke to some of the group’s organizers when I visited the exhibit a second time. Although the varied bodies that made up the “we” of “We are Here” also differed in our interpretations of and feelings about the work, there was something empowering about making an imprint on the space and presuming that “we” (too) are the audience for Walker’s work.

On July 5, a day before the exhibit closed, The Free University of NYC staged a related intervention. Free U-NYC organized performances inside the exhibition—I heard the sonorous voice of a woman singing as I entered the space for the last time—and critical dialogues outside throughout the day connected the history of slave labor to the more immediate past of sugar factory workers, and the decline of industrial labor to the impact of gentrification. These gatherings sought to use the space to stage mutual and multiple acts of recognition, to bring the past into our present moment. These performances of resistance may not save the refinery or the Sugar Baby herself from ruin, but they might ensure that both have a lasting imprint on our cultural memory.

Top photo of Marvelous Sugar Baby on exhibit at the Domino Sugar Refinery from Flickr user dslrnovice; photo of servant boy by Flickr user Geraldine Sheinfell,  both under license from Creative Commons 2.0. Other photos by Jennifer Williams 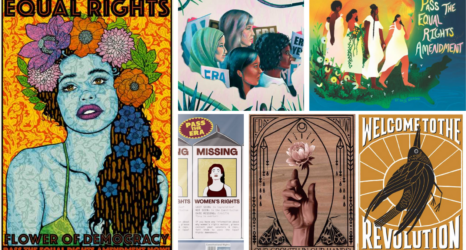 ‘Artists 4 ERA’ Demand Equal Rights for All Americans: ‘It Is Overdue That Gender Equality Becomes the Law of the Land’