The interview was supposed to be about my writing practice. But it quickly took a turn to be about social justice.

Because most of my writing is about social justice in one way or another. Not necessarily intentionally; it just ends up that way because I write true stories about real people, often self-confessional. The denial of, or quest for, social justice is more often than not part of all of our stories. Especially if you’re a woman and/or a minority.

The interviewer was very good, enlightened even. An English lit and political science major, Greg seemed to understand that “the pen is mightier than the sword,” so he perceptively led me to the broader issue that underlies most of my creative nonfiction pieces.

An upcoming performance of my play about the early suffragists, The Stone that Started the Ripple, prompted questions about women’s history. Greg cut right to the chase: “Do you think we should just forget about these separate commemorations for women, like Women’s History Month?”

Do I? You bet! I’ve been waiting 35 years to answer that question. Such set-asides are an antiquated way of saying, “Oh, yeah. Women have done some pretty neat stuff too. We’ll showcase them for one month. The other 11 months are about the rest of us guys.” Separate designations and commemorations simply put women on a pedestal for short periods of time only to be viciously torn down again.

I feel the same way about Black History Month.

And then there’s Women’s Equality Day. In 1971, Bella Abzug worked with her colleagues in Congress to have August 26, the day the passage of the 19th amendment is commemorated, declared as such. Here’s the text of the joint resolution, which is reissued each year by the sitting president:

WHEREAS, the women of the United States have united to assure that these rights and privileges are available to all citizens equally regardless of sex; and

WHEREAS, the women of the United States have designated August 26, the anniversary date of the passage of the Nineteenth Amendment, as symbol of the continued fight for equal rights: and

WHEREAS, the women of United States are to be commended and supported in their organizations and activities.

Although well-intended at the time, it now seems insulting, hypocritical and downright ridiculous that this proclamation needs to be reissued every year because women are still treated as second-class citizens. As a nation, why don’t we just fix that? Why is “the continued fight” necessary? And the part about women uniting to assure that such rights and privileges are available? When Congress is 80 percent male, it can’t just be up to the women. (Some women aren’t even on board, believing the Adam’s rib fable and other Biblically paternalistic rhetoric.) And trying to defund Planned Parenthood certainly doesn’t support our “organizations and activities,” as the neverending resolution decrees.

Without intention, Greg had started my blood boiling. Not at him, but at the conditions under which women continue to labor. I started talking faster and faster, waving my arms around. Luckily, there was no camera to zoom in on my increasingly red face.

Social justice is the very basis of an egalitarian society. It’s what we don’t have in our American culture. And never have. Since proposed in 1923, we’ve been unable to get the Equal Rights Amendment (ERA) passed, which simply says, “Equality of rights under the law shall not be denied or abridged by the United States or by any state on account of sex.” What kind of civilized nation would have a problem with that?

Sexist comments ooze out of Donald Trump’s mouth because sexism still oozes out of every corner of our misogynist nation. Some postulate that he’s high in the polls because he’s saying what everyone else is thinking. We should be frightened, not amused.

The suffragists barely make a cameo appearance in our history books. There’s no official parade to commemorate women gaining the right to vote after 150 years, 75 of which involved active political struggle. No one knows Sojourner Truth from Harriet Tubman. There are no birthdays of famous women celebrated as national holidays. And we get one lousy month to showcase our contributions.

It’s long past time to weave accomplished women and gender-inclusive legislation into the fabric of American culture. Abolish Women’s History Month and instead re-write our history books to give women their rightful place. Abolish Women’s Equality Day and instead pass the ERA to make women truly equal under the law. As Elizabeth Cady Stanton wrote, “The battle is not wholly fought until women stand equal in the church, the world of work, and have an equal code of morals for both sexes.”

The battle clearly is not yet wholly fought.

Greg then asked me for suggestions as to what might help move women’s equality along. I sat silently as his recording device whirred; I felt stumped and discouraged. I then hesitantly said that all those who believe that social justice has not been achieved need to speak up. Speak up no matter who or what we’re up against. If an epithet or joke offends, or a sexist term is used, call it out despite those who wrongly espouse that political correctness is restrictive. Speak up when others are profiled, stereotyped or summarily dismissed based on their appearance. Continue to insist on the sovereign right to have dominion over one’s own body. Demand that female candidates of any political stripe be spared sexist commentary. Boycott companies whose employment practices are discriminatory.

In my writing group, a young Iraq war veteran referenced a book he read about “Jack Nicholson and all the chicks he slept with.” What troubled me the most was that the younger women in the group didn’t seem offended or outraged; the expressions on their faces didn’t change. I decided to tackle it, telling him I found the term chicks offensive. He immediately apologized. Responding to a contrite follow-up email he sent, I felt as antiquated as Elizabeth Cady Stanton, trying to motivate yet another generation when she knew her time was running out:

I’m of the generation that got bloodied fighting for women to have equal status in our society (and we’re not there yet, BTW). It’s an ongoing worry for us that those who come after don’t know what it was like before feminism took hold, so they aren’t as strident or vigilant about protecting women’s rights. Since ‘silence is the voice of complicity,’ I long ago committed to speaking up, especially modeling for younger women who may be present. I’m curious as to whether the term ‘chicks’ has caught on again in your generation as an acceptable way to refer to women…it’s been a LONG time since I’ve heard it used, so I was startled.

He responded that there’s much sexism in the military but more and more women are finding their voice to file complaints and insist on different treatment. I was glad I opened up the dialogue with him.

The show will go on—my play will be performed on Women’s Equality Day. The ghosts of the suffragists will appear on stage, and Elizabeth Cady Stanton will remind the audience that there’s still much work to do, saying, “We are only the stone that started the ripple; but you are the ripple that is spreading and will eventually cover the whole pond.” The crowd will clap and cheer and give a standing ovation.

But until great women become part of the whole American story, woven into the very fabric of our nation’s laws and history, our brave foremothers will always stand alone, on the edge of the stage, on the edge of acknowledgement, targets for those who think women are still less than. Like ducks in a shooting gallery waiting to be struck down. Like the chicks some still consider us.

Greg prudently edited and posted the interview. And bought a ticket to my play.

It’s time for an Equal Rights Amendment. Sign our petition to support ratification of the ERA!

Patricia A. Nugentis published in trade, literary, and online journals. She wrote The Stone that Started the Ripple, a dramatization about a modern-day reunion of the suffragists. She is the author of the book, They Live On: Saying Goodbye to Mom and Dad, a compilation of vignettes portraying the stages of caring for and saying goodbye to a loved one. She can be contacted www.journalartspress.org. 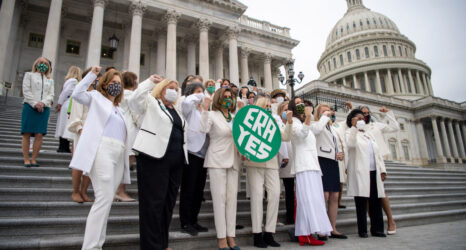 Gendered Citizenship and the Struggle for Reproductive Rights