Where Maternal Health and Child Marriage Intersect
Skip to content

Child marriage interrupts the futures of young girls and women everywhere—and it has great ramifications on their maternal health.

Early marriages almost always lead to the early onset of sexual activity, often without consent or contraception, which in turn result in early pregnancies. But an adolescent’s body is generally not developed enough to bear a child. Compared to women in their twenties, girls younger than 15 are five times more likely to die from childbirth, and for women and girls between 15 and 19 years old, pregnancy remains the leading cause of death worldwide.

Anemia, malnutrition and prolonged labor are just some of the common complications that plague pregnant adolescents; many young mothers without access to proper health care also suffer from obstetric fistulae—a hole in the birth canal that occurs when a young mother’s vagina, bladder or rectum tears during childbirth, causing urine and feces leakage as well as infertility and even death.

To top it off, child marriage also brings higher rates of gender-based violence, such as marital rape and domestic abuse from family members. The practice is also often connected with female genital mutilation or cutting, which can lead to additional health consequences for young girls.

In March, UN Women, the Working Group on Girls and the Feminist Majority Foundation hosted a panel during the UN Commission on the Status of Women on child early forced marriage and female genital mutilation, bringing together activists to discuss the gravity of the practices on a young girl’s life. At the event, UN Women Executive Director Phumzile Mlambo-Ngcuka declared that “child marriage—child abuse that is sanctioned by society—curtails the potential of a girl for the rest of her life.” African Union Goodwill Ambassador Nyaradzayi Gumbonzvanda added that the term child marriage ultimately misleads. “It is not a marriage,” she declared. “There can never be a marriage of a child. It is child sexual abuse, it is exploitation, it is rape, it is abduction. It’s a modern form of slavery. We need to name it appropriately.”

At the same event, 18-year-old Ya Kaka 17-year-old Hauwa, who survived abductions by Boko Haram, told their stories publicly for the first time. While neither faced forced marriage, both endured rapes by the militant group and became pregnant in their adolescent years; both lost their children as well. “We encountered a lot of trouble in our lives,” Ya Kaka told NPR after the panel. “[American girls and boys] should understand that and also support us [and others who’s suffered because of Boko Haram] in whatever way they can.”

Ya Kaka’s call to action couldn’t be more urgent in the U.S., where child marriage is also taking place at alarming rates. According to U.S. law, people need to be at least 18 years old to marry, but that age can drop even lower with parental consent or sometimes a judge’s approval. Only three states actually limit marriage to people over 18, and recent campaigns to end child marriage in New Jersey, New Hampshire and even California have either failed or stalled in the legislation process.

“I just want to remind everyone in the room, when I was forced to marry, it wasn’t in Africa, it was right here in New York,” Jaha Dukureh, UN Goodwill Ambassador and Nobel Peace Prize nominee, told the crowd at CSW. “And you can get married in New York with a parent’s consent at the age of 15.” Dukureh talked to Ms. earlier this year about how her own experiences with FGM and child marriage motivated her to tackle both issues in the U.S. and abroad.

In the U.S., 31 percent of women who marry before the age of 19 are more likely to live in poverty, 18 times more likely to endure domestic violence and 50 percent more likely than their unmarried peers to drop out of high school. And again, it often forces motherhood on young children who may not even want to be mothers just yet, let alone have a developed-enough body to even bear a child.

“I was so young, I wasn’t able to process my feelings or make other people listen to my feelings. When you’re 16 years old, the skills of asserting yourself just aren’t there,” Deanna Martin of Paso Robles, California, who was just 15 when she was engaged and 16 when she married, recalled in the fall 2017 issue of Ms. “I really felt like I couldn’t go outside of my family for help. I had no idea who the person—agency—who it would be that I would take my problems to.”

The What Women Want survey, launching today to mark #IntlMHDay, offers the opportunity for girls and women everywhere to share what health issues they believe need to be addressed globally—and child marriage should be one of them. The practice scars young girls economically and often physically, and infringes on their most basic rights as girls and often as young mothers.

With roughly 23 girls married every minute, one day of action isn’t enough. Every day, advocates must reckon with and fight against child marriage until we successfully end such state-sanctioned abuses.

Maura Turcotte is an editorial intern at Ms.

Intergenerational Solidarity Is No Longer Optional—’Adults Need to Involve Us Now,’ Say Teens 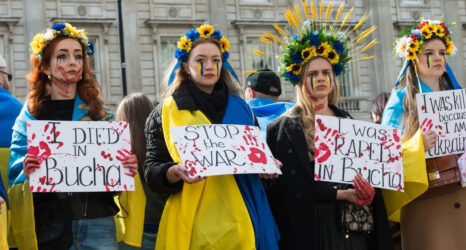