The Politics of Periods - Ms. Magazine
Skip to content

Periods enter the spotlight in an essay collection out today that raises a variety of voices on a topic long shrouded in shame and secrecy. In Period: Twelve Voices Tell the Bloody Truth, writers of various ages and across racial, cultural, and gender identities share stories about the period. Each of our twelve authors brings an individual perspective and sensibility. They write about homeless periods, nonexistent periods, male periods, political periods and more. Told with warmth and humor, these essays celebrate all kinds of period experiences. To mark its release, we’re publishing the essay by Ms. contributor and menstrual equity movement leader Jennifer Weiss-Wolf that appears in the book.

Menstruation is having a moment—surfing the crimson wave of fame, so to speak. Quite a stark contrast to my own teenage years in the 1980s, when periods were mentioned in whispers (the word wasn’t actually spoken on TV until 1985!), tampons kept under wraps and cramps quietly endured. Going public with the discussion has been downright liberating—a welcome and long-overdue advance.

After an explosion of rebellious activism and innovation in 2015, NPR designated it “the Year of the Period.” Cosmopolitan magazine declared we’ve entered the era of “Period Power.” An oversized torpedo-like tampon was featured on the April 29, 2016, cover of Newsweek with the headline “There Will Be Blood. (Get Over It.) Period Stigma Is Hurting the Economy, Schools and the Environment. But the Crimson Tide Is Turning.” And actress Ashley Judd even gave a worldwide shout-out to period activism at the global Women’s March in January 2017 by performing the poem “Nasty Woman” by Nina Donovan.

Given that this particular bodily function has been an essential slice of the human condition forever—and stigmatized, sidelined or, at best, ignored for just about as long—it is no small thrill that menstruation has become a modern cause célèbre. Now the time is ripe to harness all that momentum and go full-blown political: periods as a public policy agenda.

It is what I call the fight for menstrual equity. What does that mean? In order to have a fully participatory society, we must have laws and policies that ensure menstrual products are safe and affordable for everyone who needs them. The ability to access these items affects a person’s freedom to work, study, stay healthy and engage in the world with basic dignity. And if anyone’s access is compromised, whether by poverty or stigma or lack of education and resources, it is in all of our interests to ensure those needs are met.

As hard as it may be to believe, for millions in America today—those living paycheck to paycheck, or without a paycheck at all, or on the streets, or in government custody—tampons and pads can be an impossible luxury. A year’s supply costs in the range of $70 to $120. This can be an out-of-reach expense for many—possibly even the difference between making rent and putting food on the table. Other reusable alternatives like menstrual cups, cloth pads and period underwear can be cost-effective over time (more environmentally friendly, too) but require a steep upfront investment.

There’s some painful bias to these statistics as well, making periods doubly burdensome for those who are poorest. While middle-class families can take advantage of options like bulk discounts or shopping at wholesale retailers to buy a supply of tampons, those who live in poverty end up paying considerably more for the exact same items, whether it is because they’re subject to inflated prices at convenience stores or are only able to expend precious dollars one necessity at a time. For those who are homeless or incarcerated, monthly bleeding is especially brutal. The most commonly reported substitutes when maxi pads aren’t in the budget? Newspaper, brown paper bags, old rags and socks.

Access to affordable menstrual products is a necessity for half the population. Yet this reality is given practically zero consideration in the laws by which we live. Think about this: Tampons and pads are ineligible for purchases made with public benefits like food stamps; they’re not made routinely available in shelters or crisis centers, nor are they provided in any uniform way in jails and prisons. In the vast majority of states, menstrual products are not even exempt from sales tax, forcing the customer to pay added cents on the dollar. And while the government regulates the provision of toilet paper and hand soap—requiring these in public restrooms, including in schools and workplaces—we’re on our own when it comes to managing our periods.

Outraged yet? I hope so! Welcome to the fight for menstrual equity. The good news is that in every single one of these instances, thoughtful policy change can make a difference. Here are some of the new laws that are being advanced across the country.

The fight to eliminate sales tax on menstrual products—better known as the tampon tax—has caught on around the world. The core argument for scrapping the tax: The products we use to manage our periods qualify as a “necessity of life” and therefore are worthy of a sales tax exemption. Here in the United States, among the items that most states already include in this category are food and medicine—which means that even things like Fruit Roll-Ups, Pop-Tarts and ChapStick get a tax break.

If you think it sounds crazy that we even have to make the case that tampons be classified as a necessity or deemed as indispensable as a bag of chips, you’re not alone. Prior to 2015, 40 of the 50 states collected taxes on menstrual products; of those other 10 states, only five were ahead of the curve and had already begun exempting menstrual products—Maryland, Massachusetts, Minnesota, New Jersey and Pennsylvania. The other five—Alaska, Delaware, Montana, New Hampshire and Oregon—collect no sales tax at all.

Since then, thanks to a nationwide petition and campaign, a whopping 24 states have introduced legislation to scrap the tampon tax. Even more heartening, lawmakers from both sides of the aisle are getting behind the cause, Democrats and Republicans alike, making menstruation one of the rare, truly bipartisan matters in American politics.

So far, three states—Florida, Illinois and New York—have succeeded in passing and implementing new laws to make menstrual products entirely tax-free. The city of Chicago and District of Columbia passed ordinances to the same effect. And Connecticut removed sales tax revenue from menstrual products from its 2018 statewide budget, effectively eliminating the tax.

Beyond the sales tax, there is an increasingly widespread belief that menstrual products should even be free—or at least made more affordable and accessible—for those who are most in need. In terms of practical relief for families that are struggling and truly unable to meet the monthly expense of these items, a tax savings isn’t going to make enough of a dent. There is more we can do.

New York City has proudly led the way. In 2016, it unanimously passed three groundbreaking laws that mandate the provision of free tampons and pads for all the city’s public schools, shelters and jails—the most comprehensive legislation of its kind in the world. Los Angeles followed the Big Apple’s lead in 2017 and passed an ordinance requiring free access to tampons in all county juvenile detention centers; Colorado did so for all of its state prisons. Similar laws are being introduced in many states across the country, from California to Connecticut.

Capitol Hill is also making waves. Debating periods in the hallowed halls of Congress? That’s a first—and a very big deal! But it is happening. U.S. Senators Cory Booker and Elizabeth Warren demanded free menstrual products for federal prisoners with the introduction of the Dignity for Incarcerated Women Act. And U.S. Representative Grace Meng introduced the Menstrual Equity for All Act of 2017, the first-ever federal menstrual access bill. Among its provisions, the bill would allow individuals to buy menstrual products with money they contribute to pre-tax Flexible Spending Accounts; provide a refundable tax credit to low-income individuals for the purchase of menstrual products; enable federal grant funds to be used by homeless assistance providers to make available menstrual products, along with other allowable essentials like soap and toothpaste; require that menstrual products be freely available to incarcerated inmates and detainees; and mandate that large employers provide menstrual products to employees in workplace restrooms.

Meanwhile, dozens of college campuses across the country—from NYU to UCLA and the University of Nebraska to the University of Arizona—have taken up the cause as well. Students have lobbied administrations or leveraged funds to ensure access for all. At Grinnell College, in Iowa, one intrepid student initiated a campus-wide caper that launched a powerful protest. She used bobby pins to break open campus dispensers, freeing all the tampons and pads for others to use. “I freed your tampons kept behind lock, key and quarter,” she wrote in a public letter to the college. “Bleeding bodies deserve to think about Foucault and micro-organisms and the history of the bleeding bodies that came before them. When we menstruate, however unexpectedly, we should not feel fear in the pits of our stomachs because of your lack of foresight. We are a part of this college. Provide free menstrual products to students who need them so I can stop picking the locks on your bogus machines.” The president of Grinnell, a former deputy director of the National Institutes of Health, agreed. “It’s not unreasonable to provide free menstrual products everywhere, including on campuses,” he announced. “We have free toilet paper, so wanting the same for menstrual products is not extreme. This is a normal human function.” Indeed.

The Future of Menstrual Equity

Even with this progress, many other critical fights for women’s health and rights continue to be waged at all levels of government—from statehouses to Congress and all the way up to the U.S. Supreme Court.

Which is exactly why I believe menstruation belongs smack in the middle of policymaking. Our periods, quite amazingly, are a potent rallying force. We are half the population and must leverage our collective voice and power. It is up to us to make menstruation a mainstream matter: It is not a secret; we deserve to have our basic needs met, and we should not be made to feel ashamed.

How can we be political about periods? It’s actually remarkably simple. Talk about it. Tweet about it. Write about it. Whether you prefer to craft poetry or prose, publish a letter to the editor, or petition your school principal—or even the president of the United States—it all makes a difference.

Let’s push our leaders to make menstrual equity a priority. At a minimum, that includes championing policies that prioritize the immediate needs of those who menstruate: access, affordability, safety. In so doing, we can recognize and elevate the power, pride—and absolute normalcy—of periods. It is a fight that stands to improve all our lives. 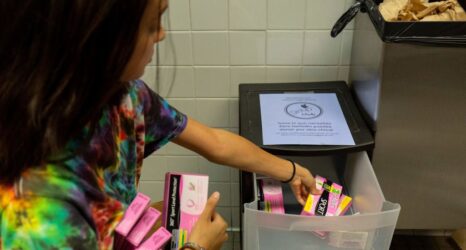 Now More Than Ever, It’s Time for Universal Menstrual Education for Gender Equality