Beauty as Survival in "Orange is the New Black" - Ms. Magazine
Skip to content

In season six of Orange Is the New Black, the women of Litchfield aren’t wearing makeup like they used to. As someone who spent six years inside, I know what a loss of control—and identity—that a lack of makeup and grooming can represent for those women.

That’s why, even though the riot is over, I’m still scared.

Every season of Orange has acknowledged the complexities of women’s cosmetic lives in prison. Showrunner Jenji Kohan is doing more than costuming characters. She’s reflecting the female reality that looks are identity—from Morello’s contraband lipstick to Nikki’s dope-fiend smoky eye to Red’s impeccable mane, and even through Blanca Flores, who barely bathes. Last season’s prison riot plot, in particular, provided critical commentary on the freedom and tyranny of beauty.

Suzanne “Crazy Eyes” Warren assured herself that she was beautiful as she washed off Mikado-style whiteface forced on her in a sort of cosmetic rape by the “methheads,” Leann and Angie. Cuffed to her own bed for protecting hostage guards who were being sexually abused, she slips into psychotic soliloquy of traditional beauty advice about washing your face to avoid acne, not picking the acne to avoid scars—and always, always moisturizing. She was looking for moisturizer when she found Maureen, her love interest-turned-stalker-turned-victim, lying in a toilet stall, her face so pummeled that it looks like her eyeball had been relocated to her cheekbone. “Your face is under there,” Warren assures her, “and it’s beautiful.”

Meanwhile, Red was getting scalped by evil Captain of the Guards Desi Piscatella—before he was, ostensibly, about to murder her and others in a closet. Piper comforted her in this abject danger with a singular declaration: “Red, you’re beautiful.”

These chats—providing solace about someone’s appearance while she’s flirting with death—are clunkers, but they kind of made sense. Each outlandish reassurance of beauty reminded the suffering character that she still existed. In prison, that can be easy to forget.

Beauty, to women who are essentially caged, isn’t so much a form of freedom as it is proof that you matter. In a system where women feel like their lives and needs are inconsequential, and in a landscape structured through patriarchy to strip them of their identities and personalities, assuring them that they’re still pretty affirms their existence.

It’s part of prison’s package deal: along with where she sleeps and what she eats, an inmate loses control over how she looks. Women in prison circumvent the limitations with various prison makeup “hacks.” (An entire chapter of the eponymous book that launched the Netflix series is devoted to beauty behind bars.) How we look is important to women, and is made to be of importance to women—no matter where we are.

This doesn’t make women vain. It makes them adaptable. “I think, therefore I am” doesn’t work for an oppressed woman. She has to appear, too, to exist. 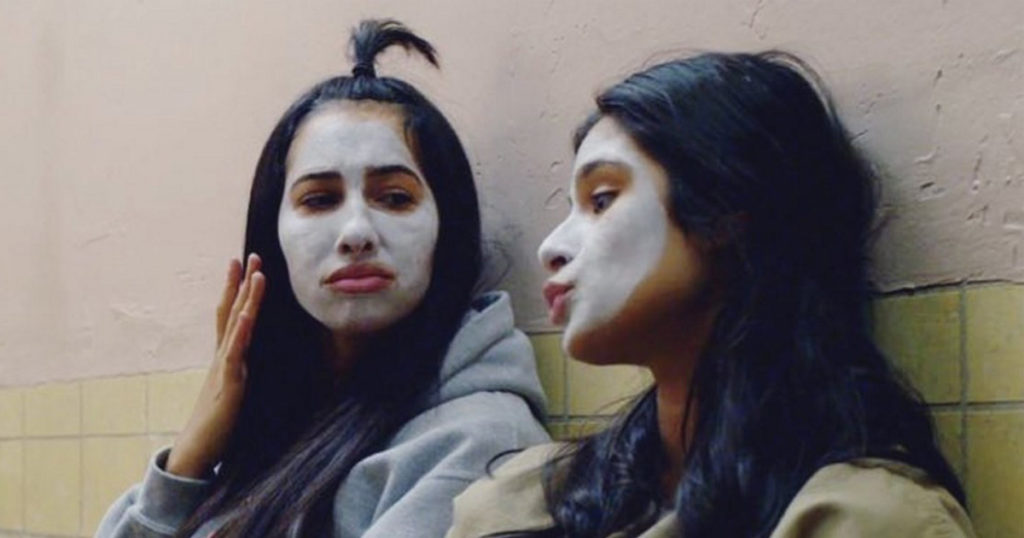 Rebecca Solnit, in her book Men Explain Things to Me, described the multiple shifts that women work every day and noted that women often have to punch virtual timecards when men don’t. The first shift is the work shift. The second is the household maintenance shift. The third is the beauty shift: the amount of time women must spend in order to look presentable for the jobs we work in, or the people we interact with.

Women can choose not to show up for the third shift, but there are consequences for this type of absenteeism. Navigating the world requires us to look and appear a certain way. Sociologists have actually studied and determined that there’s an irreducible minimum of makeup that women have to wear to succeed in the workplace, and even when women run for president their looks become defining parts of their careers.

Orange has given incarcerated women a ride to work for the beauty shift. Last season, it had to: the relative freedom bestowed by the three-day riot that’s now over would have to entail more control over the inmates’ appearances. Since the riot was a chance at dignified survival for the Litchfield ladies, it had to feature aesthetics and the mind-body distinction.

Into the void once occupied by head counts and intrusive body searches thus came Martiza and Flaca’s own Youtube channel for makeup application, which then turns into makeovers for everyone—cosmetic elegy for now-deceased character Poussey. Together, they wipe under Nicky’s eyes and smooth her hair, turn Flores into a 50’s pinup and glam the usually glum-looking Alex. Some transformations are less dramatic; Nicky’s metamorphosis, however, made you wonder if her voice hadn’t been dubbed in.

Orange Is the New Black has made public many aspects of the lived realities of female inmates: their capacity for self-government, their priorities, their constant search for leadership. As of late, it has also served as a stark reminder that a lack of cosmetic control in women’s prisons can amount to abuse.

Before his eventual killing, Piscatella, preparing to slaughter female inmates hiding in a closet during the riot, explains that men fear pain, but women are used to it. “You need to break them in a different way,” he declares. Season six shows just how broken they are—without any adornment, the women scrounge for soap, shampoo and toothpaste, desperately seeking out the most basic forms of physical self-care. It’s no wonder that their behavior has become more animal-like and consciousless. They don’t feel like people any more.

Beauty—or the lack of it—breaks the female prisoner. Women in prison get fired mid-third shift, when the consequences for our self-esteem are even more severe; as we realize that our physical attributes, demanded by men and society, are gone. When women and their methods of becoming acceptable and attractive are disconnected, consolation is the only prize.

As someone whose convictions include attempting to victimize Sephora and BlissWorld, I took special notice while I was incarcerated of two other female defendants: Former Miss USA Bess Meyerson, a woman whose personal fortune was close to $16 million, took a collar for boosting $44 worth of cosmetics; Rudy Giuliani’s daughter Caroline was arrested for shoplifting cosmetics from a Fifth Avenue Sephora. Both had the connections and access to money that made these crimes more than preventable—but I can’t help but think that these offenses were both protest of cosmetic oppression, as well as a certain type of survival crime.

Through beauty culture, women adore, enjoy, rebel against—and are ruined by—patriarchical expectations, all at the same time. Sometimes, they riot against it. Otherwise, they may be content just to survive it.

Chandra Bozelko writes the award-winning blog Prison Diaries  She's a 2018 "Leading with Conviction" Fellow with JustLeadership USA and a 2018 Pretrial Innovation Leader with the Pretrial Justice Institute. You can follow her on Twitter at @aprisondiary.