Confronting the Dangers of Medical Sexism at "The Bleeding Edge" - Ms. Magazine
Skip to content

They’re the three words nobody wants to hear: “You need surgery.”

For many, just the fear of being under anesthesia and not having control over your body is terrifying—but on top of that, the potential risks involved with the procedure itself are often worthy of some concern. Despite all of this, however, the decision to have a surgical procedure can also bring a sense of hope: the idea of fixing a medical issue brings patients a feeling of optimism.

Unfortunately, some patients recover from a procedure only to be met with a lifetime of chronic pain and suffering. Their stories are the launchpad forAmy Ziering and Kirby Dick’s new documentary The Bleeding Edge, which explores and reveals the dangers and consequences of many medical devices hailed more broadly as examples of modern innovation.

Medical devices exist within an interesting grey area in the world of medicine. Whereas drugs must undergo a thorough testing process to ensure efficacy and safety, medical devices don’t. Instead, they fall under a bizarre clinical testing framework that simply requires the device to be “substantially equivalent” to another legally U.S. marketed device—even if that device has been recalled.

It isn’t a stretch to imagine the ways in which this process could induce cyclical horrors for patients—and it isn’t just a hypothetical danger.

The Bleeding Edge, for example, explores the approval and subsequent consequences for women in the release of Essure, a permanent form of birth control that boasted short procedure time, minimal pain and no incisions—and was 99 percent effective at preventing pregnancy. Doctors who implanted the devices inserted a small metal coil into each fallopian tube—resulting in the body generating scar tissue around the device that closed each and blocked the connection of sperm and egg.

For many women, Essure felt like a long-awaited perfect fit for their reproductive lives. However, problems with the seemingly foolproof device began surfacing in high numbers. Patients complained of chronic pain, immense bleeding and high fevers.

The Bleeding Edge includes footage from an FDA hearing regarding Essure’s approval. At one point, one doctor jokes that “private investigators would find each of us, bring us back here and ask us why we approved this.” The entire room fills with laughter. During the discussion, questions from doctors about the risks of the technology went unanswered. 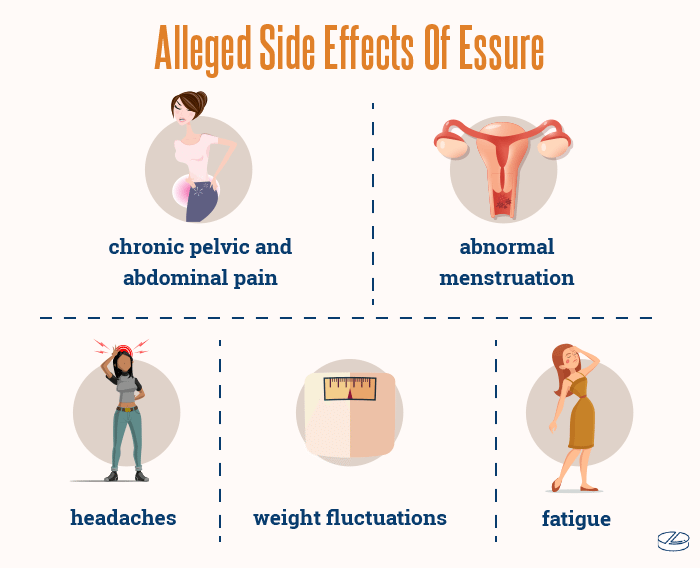 Another medical device disaster explored in Dick’s documentary was vaginal mesh—a technology cleared through the same risky approval pathway as Essure which boasted lasting results and a short procedure time to treat mild incontinence issues. Such treatments ultimately left many women with immense pain and bleeding. For many, choosing vaginal mesh stripped them of their sexual lives and put their sexual health in crisis.

The film also shines a light on the DaVinci Robot—a device that allowed doctors to preform surgeries from up to seven feet away using robotic instruments which was used frequently to perform hysterectomies, causing a huge uptick in the rate of vaginal cuff dehiscence. Women patients whose doctors used the robot were three to nine times more likely to suffer a complete tear of their vaginal incision as a result; in the documentary, patients recall “pomegranate-sized” blood clots emerging in between their legs, and even multiple feet of intestines “falling” out of their vaginas.

Not all medical device stories in The Bleeding Edge are as distinctly female—the documentary also focuses on the harrowing stories of hip replacements causing muscle deterioration and internal “metal sludge”—and, surely, neither are the myriad horror stories left unexposed in the film. But the fact that three of four examples used to illustrate the dangers of the medical device field so uniquely impacted women is a telling tale of the dangers of medical sexism—and the callous regulatory policies and practices that disregard the importance of women’s health and lives.

Viewers can’t help but question if medical device companies and the bodies which oversee their administration simply care less about women, resulting in a failure to adequately assess risks to their well-being before predatory attempts to persuade them into undergoing new procedures. It’s a question pondered in other documentaries like Perfectly Safe, which focuses on the dangers of breast implants specifically but reveals, in the narrative, the often fatal flaws in testing and evidence-sharing which the FDA and the inventors of female-oriented medical devices seem content to continue perpetuating.

Doctors themselves can be party to such sexism as well, as exhibited in the stories women tell in The Bleeding Edge. When Ana Fuentes called her doctor and described multiple painful symptoms she believed resulted from the implant of her Essure device, he immediately doubts her. “Those two little things,” he remarks, belittling her pain, “don’t do all the changes you’re telling me.” The social norm of doubting women, and of minimizing their pain, is a thruline in the film. Even when women complained of excruciating abdominal pain and inability to walk, doctors often wrote off their symptoms to normal menstrual pain.

As the late Rep. Louise Slaughter says in one scene: “Women just seem to be expendable, don’t they?” One major takeaway from The Bleeding Edge is that it is long past time for the medical community to ditch such an idea of expendability and choose accountability instead.

Madeleine Gatto is a former editorial intern at Ms. She is currently majoring in journalism and minoring in communication policy and law at the University of Southern California. Her passion for feminist writing and research began when she was a part of her high school's Girls Learn International chapter and Women's Awareness club. Despite the fact that her last name means cat in Italian, she's most definitely a dog person.