We Heart: SNL's Tribute to the Feisty and Fed-Up "Women of Congress" - Ms. Magazine
Skip to content

The 2018 midterms welcomed a huge crop of feminist fresh(wo)men who ran as feminists, won as feminists and then stood—or, rather, dressed–in solidarity with their feminist foremothers at the State of the Union last week, wearing “suffragette white” outfits adorned with ERA YES pins.

This weekend, Saturday Night Live paid homage to them the only way they know how. 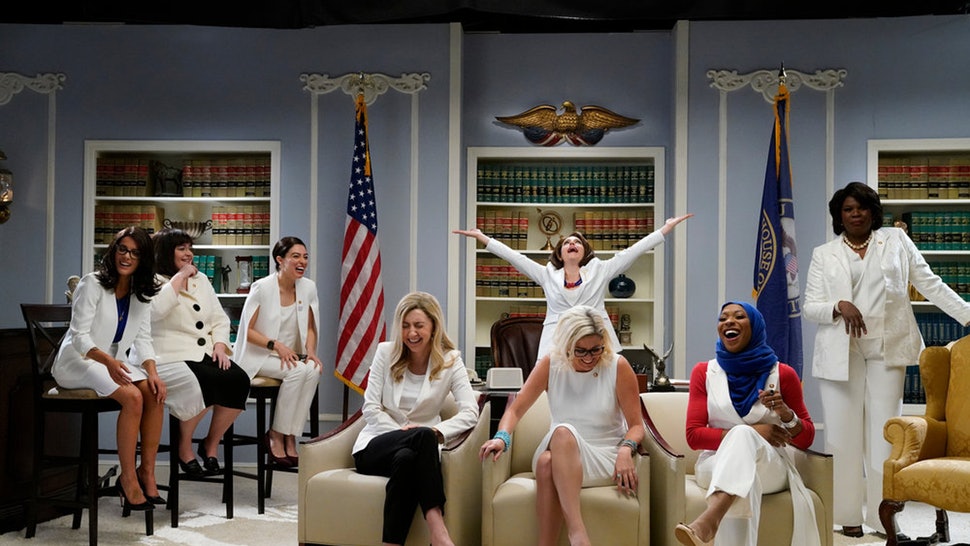 “Once upon a time, there were women,” a narrator announces at the beginning of the “Women of Congress” spoof on a seventies-styled television series. “Then they became fed-up women. Then they became Congresswomen.” The send-up of the fiery feminists of the 116th Congress also includes a nod to their historic diversity: “They wear white,” the narrator explains, “but they’re not all white—and we love that.”

The narrator goes on to introduce several stars of the 116th Congress, endowing them along the way with hilarious, zeitgeist nicknames. First up is Nancy “Madame Clap Back” Pelosi, in a recurring role played by the hilarious Kate McKinnon, who is “so woke” she can’t close her eyes. She’s followed by Alexandria “I Say What I Meme” Ocasio-Cortez, played by Melissa Villaseñor.

Leslie Jones as Maxine “Don’t Go Chasing” Waters arguably steals the skit with her announcement for viewers: “They call me Auntie Maxine, but I’mma make Trump say ‘uncle.” Kyrsten “Kooky Arizona Lady” Sinema, played by Cecily Strong, tries her own hand at the same when she comes on screen, throws a poison dart into a clueless and nameless man’s neck and boldly declares: “I’m bicameral, bipartisan and bi; deal with it.” Ego Nwodim as Ilhan “Get the Hi-Job Done” Omar brags instead that when Ted Cruz sees her, “he crosses the street.” Anne “Raise the Roof” Kuster, played by Aidy Bryant, encourages fellow women to “break that glass ceiling” with her hands held high above her head.

Abigail “Say My Name, Say My Name” Spanberger, played by Heidi Gardner, bookends the introductions when she brings Pelosi back into the fold with a jab at Republican attempts to sink Democratic nominees by attacking the now-Speaker of the House on the campaign trail. And SNL musical guest Halsey ultimately closes out the ensemble act as Rashida “Impeach the Motherf**er” Tlaib. (You can guess her sassy introduction line.)

The skit also includes a scene from the show: The lady squad, huddled around Speaker Pelosi’s desk, communicates with a faceless Trump over an intercom in the same way the eponymous Angels used to talk shop with Charlie. When Trump attempts to take credit for the record number of women serving in Congress, they grow rightfully irritated.

“You don’t get to take credit for that!” they exclaim. “That is not because of you; that is in spite of you!” After Tlaib smashes the intercom, Waters delivers a final zinger before the women walk slowly away from a fiery explosion in the background: “And you’re not rich.”

We’re crossing our fingers that this series gets renewed for another season.