Earlier this week, I addressed the New York City Council’s Committee on Health about my experience being sexually assaulted by my OB/GYN while I was pregnant. I learned that a clear precedent for how to eliminate a physician’s name from the record didn’t exist in my state when I sought to have the name of my abusive OB/GYN removed from my twin daughters’ birth certificates—but was denied.

My story moved Council Member Mark Levine to sponsor legislation allowing for the redaction of the name of physicians whose license has been suspended, surrendered or revoked from birth certificates. My testimony during hearings over the legislation is below, and can be watched on the Council’s website.

You can support this legislation by contacting New York City Council Members. 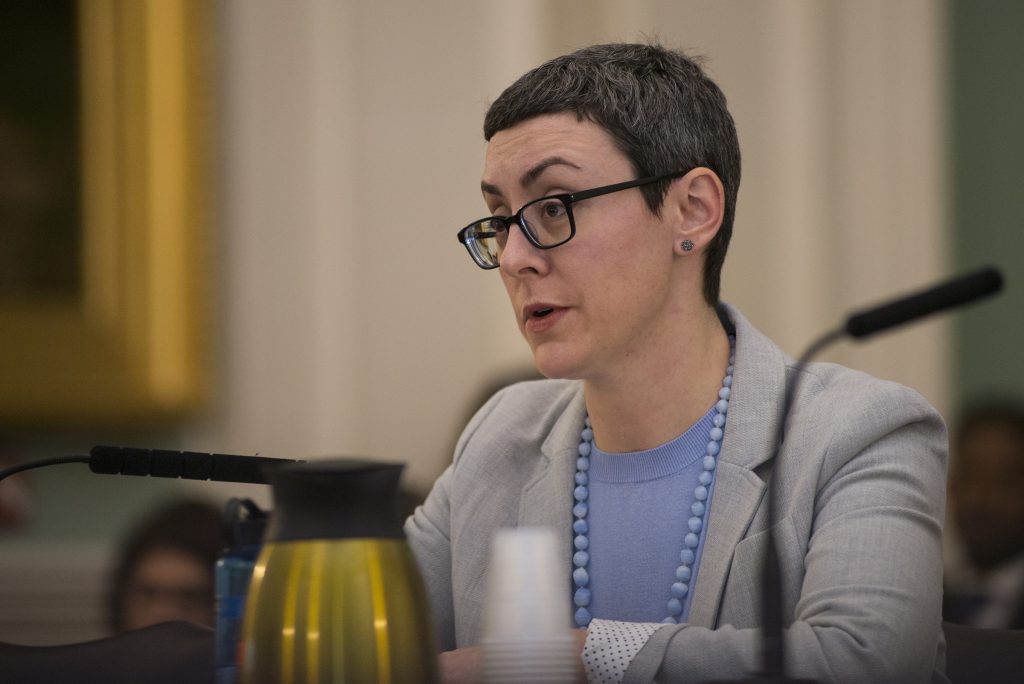 While this is difficult, I am grateful for the opportunity to address the Committee on Health today. I have publicly shared my experience in an effort to help shed light on sexual assault by medical professionals, on the failings of the criminal justice system in supporting survivors when they do come forward to report crimes and on the long trail that trauma leaves in your life. This bill allowing the Department of Health and Mental Hygiene Office of Vital Records to redact the name of a physician from a birth record when that physician’s license has been suspended, surrendered or revoked by the New York State Office of Professional Medical Conduct, would be a tangible step towards justice for me and others like me.

I’d like to start by thanking Council Member Mark Levine for introducing this legislation in response to my advocacy and in support of survivors of sexual assault. I am also grateful to Council Members Margaret Chin, Andrew Cohen, Stephen Levin, Keith Powers, Donovan Richards, Helen Rosenthal and Kalman Yeger for their co-sponsorship.

I am privileged to have an amazing community supporting me—and would like to acknowledge my husband, David, and my family and friends for their unwavering support; my friends Leigh Graham, who is here with me today, Marissa Elkins and Kate Kurera; our attorney Anthony DePietro; Assemblymember Dan Quart; and, finally, Albert Samaha, whose thoughtful telling of my story in BuzzFeedNews last summer helped me get this out and start bringing the many injustices that I and others have faced to light.

The assaults and subsequent experiences seeking justice have dramatically altered my life. I will try to be brief today and to focus my remarks specifically on what it means for me to have the name of the doctor who abused me on my kids’ birth certificates.

A few years ago, while registering my twin daughters for kindergarten, I had to present their birth certificates. I hadn’t really looked closely at them before—but when I did, I saw that, listed under “name of attendant at delivery,” was Robert Hadden. I was shocked.

I was pregnant during all but three of my visits as Hadden’s patient at Columbia University and New York-Presbyterian hospital facilities from 2009 to 2012. During that time, he performed overly touchy exams, made inappropriate comments about my body, examined me without nurses in the room and, on my last visit with him, undoubtedly sexually assaulted me.

When I realized what was happening, I never went back. I turned inward to protect myself, my new babies, my marriage, my job. I’m still haunted by what else he did while I was unaware. He so clearly took advantage of me during a most vulnerable time in my life. The assaults poisoned the memories of my pregnancy: I felt like a failure as a woman for not turning him in; I felt like a hypocrite as a mother telling my daughters to be truthful and to question things. How could I ask them to do these things when I hadn’t?

So, after much deliberation, in the fall of 2015, I reported the assaults to the Manhattan District Attorney.

When I went to their Special Victims Unit, I learned that I was one of more than 20 women who had come forward. The ADA told me that my accusation was outside of the statute of limitation—something I would later learn was not true. Cy Vance’s office was already negotiating a plea, and I see now that the timing of my report was inconvenient for them and they chose not to act on it. In February 2016, Hadden plead guilty to crimes against just one victim—a criminal sex act in the third degree, which is a felony; and forcible touching, which is a misdemeanor. Two minor counts culled down from a long list—a list that would have been longer, had the DA included me and others in the case in Molineux, or with a second indictment.

As a condition of the plea, Hadden had to surrender his medical license to the state’s Office of Professional Medical Conduct and agree to not seek licensure elsewhere, but he got no jail time and received a nauseating guarantee of immunity. The DA agreed to never charge him for additional conduct that had turned up in the course of the investigation. It felt like they were saying the crimes against me and an untold number of other women never happened—and now, they could never be tried.

Because my abuser was well-connected and supported by his employer, he was able to effectively just retire. Much has been reported about the campaign contributions Vance received from Hadden’s defense attorney and chair of Columbia University’s board, so I won’t digress here, except to say that Vance’s justice system trivialized the fact that I was sexually assaulted and anyone who was culpable has effectively ignored their responsibility or bought their way out of it.

I share all of this to say how empty the experience of coming forward left me. I did “the right thing” and came forward, turning to those in this city who were supposed to help me. Instead, I was discarded.

When friends swap birth stories, I cringe, never wanting to share my own. My C-section scar makes me sick. I knew I’d never see Hadden again after watching him plead guilty in court. So why did I have to keep seeing his name on the birth certificates? I knew that to find some closure or acknowledgement of my pain, I had to remove his name from those documents.

In some states, that information isn’t even listed. You can order new copies online. You can request changes for errors. But you can’t change the name of the person who attended the birth.

After nearly two years of unreturned phone calls and emails to the Department of Health and Mental Hygiene, I received a cryptic email that read: “Your inquiry is currently under investigation, and we will inform you when an answer is received.” I never heard anything further, and two attorneys helping me at different times couldn’t get anywhere either. I refused to give up, though.

City rules allow anyone attending the birth to be listed. If this had been a home birth, it could’ve been my husband’s name. For that matter, it could’ve been my name. Eventually, the Department told me that they’d need an order from the State Supreme Court to make the change. However, I was advised that the court might reject such a request because Hadden’s name was not there in factual error. If I obtained a letter from the hospital where I’d delivered offering an alternative name, then maybe the change could be made.

Unfortunately, Columbia University and NewYork-Presbyterian Hospital, where Hadden worked for more than two decades, refuses to acknowledge the role they played in enabling him. So getting a new letter wasn’t an option.

That brings us to the introduction of this legislation.

Hadden continued seeing patients, even after the police and the DA were notified of the allegations against him in June 2012. There are dozens of known victims, and probably hundreds or even thousands of others out there. His own defense attorney said during the criminal trial that Hadden had over 30,000 patient visits.

Almost all of the victims I’m aware of were pregnant when we were assaulted. For 10 of us, Hadden delivered our children—13 babies who carry his name on their birth certificates. I sit up at night thinking about how many babies he must have delivered in his career, a privilege that he used to gain access to women’s bodies.

The worst part of all of this is that he was the first person in the entire world to touch my children. His hands physically took them out of me during my c-section. Those are the same hands that abused me.

I ask that you support this bill so that children like my daughters don’t have to keep the name of a serial sexual criminal on the document that marks their entrance into this world.

It’s a small ask—but a meaningful one.

Front and Center: ‘Before the Magnolia Mother’s Trust, I Was Working Seven Days a Week’