Why Women Should Be Worried About Trump's Judicial Appointments - Ms. Magazine
Skip to content

President Trump has now appointed 26 percent of the country’s federal judges, all of whom were vetted by the ultra-conservative Federalist Society and now have lifetime appointments. He also more infamously appointed two Supreme Court justices. All of this was made possible by Senate Majority Leader Mitch McConnell, who blocked nominees until Trump was in office and then rushed them through once he was inaugurated.

This takeover has serious ramifications. Trump and his supporters have installed ideologues whose appointment and Senate approval have been rammed through on strict party lines—and because of them, justice for victims of harassment, discrimination and retaliation is on its way to being put on life support.

You may think judges must follow laws and black-and-white rules in deciding cases about harassment and violence. Unfortunately, you would be wrong. “Judicial discretion” gives decision-makers who have never walked in our shoes the power to decide which cases get thrown out before trial and which jury verdicts prevail.

Imagine that you’re a 911 dispatcher working an evening shift with your direct supervisor. You’re handling an acute distress call when your boss reaches down and touches your stomach. “Stop touching me!” you say as you push his hand away and continue the emergency call. During the next call, he pushes your chair against the communications console, reaches his hand down your sweater and under your bra and fondles your breast. “You crossed the line!” you yell at him once your call is over. His next advance is stopped only by the entrance of another dispatcher.

You report the incident to HR and take a leave of absence. Not surprisingly, the HR investigation uncovers other victims of the same manager. He resigns, pleads no-contest to misdemeanor sexual assault and spends 120 days in jail. You decide to get on with your life and return to work, but everything has changed: Now you’re viewed as the problem. After being ostracized by male coworkers, moved to a less desirable shift and given unwarranted bad reviews, you have no choice but to resign.

Orrick concluded that the “single incident” of breast grabbing was not severe enough to create a hostile working environment, and during an appeal, Judge Alex Kozinski of the 9th Circuit Court of Appeals wrote a decision affirming Orrick’s decision. A single grope, he ruled, wasn’t enough to support a case: “No reasonable woman in Brooks’s position would believe that [her supervisor’s] misconduct had permanently altered the terms or conditions of her employment.”

Orrick, who was appointed to the bench in 1974 by Richard Nixon, was approximately 83 years old when he decided the Brooks case. Judge Kozinski, the appellate judge who affirmed his decision to throw out Brooks’ case, was named to the 9th Circuit Court of Appeals in 1985 by Ronald Reagan—and retired abruptly in 2017 after more than a dozen female law clerks and staff accused him of sexual harassment and abusive conduct.

Ultra-conservative judges confirmed during the Trump administration will make decisions that can affect working women for decades.

Because of the Brooks case, “one-free-grope” was the law in California for more than 20 years. As a victim’s attorney, I had to explain to countless women that my firm couldn’t pursue their claims because they would be kicked out before trial. It was gut-wrenching to tell them that they had to be sexually battered more than once before a court would even consider their cases.

Judicial ignorance at best, or misogyny at worst, has profound impacts on the lives of working women.

But in 2018, in the wake of #MeToo, the California state legislature finally fixed the Brooks problem. A new section of the state’s Government Code states that “a single incident of harassing conduct is sufficient to create a triable issue regarding the existence of a hostile work environment” and explicitly rejects the holding in Brooks.

This law is a sea change for sexual harassment cases in California, but there are still judges on the bench in state and federal courts across the country whose experiences don’t reflect our experiences as women in the workplace, and under the Trump administration, their ranks are growing quickly. California has many progressive legislators and a progressive governor, but most states have not moved to reflect in their laws the truth about sexual harassment—that a single incident of sexual battery creates a hostile working environment for virtually every reasonable woman.

Judicial appointments shape laws and affect your rights. Your job, your safety and your dignity depend on who sits in judgment. Use the power of your own discretion to speak up, vote thoughtfully, and inspire everyone you know to do the same.

Genie Harrison, who represents plaintiffs in employment and sexual abuse cases as lead trial attorney at the Genie Harrison Law Firm in Los Angeles, is President of Consumer Attorneys Association of Los Angeles. She credits Ms. as a lifeline to the feminist movement during her college years; now, she writes about legal and social issues to provoke action. You can contact her at genie@genieharrisonlaw.com. 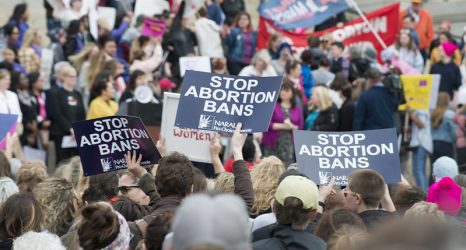 Unprecedented Surge in Anti-Abortion Laws Proposed and Passed Across the U.S.

Despite a History-Making Oscars, Women’s Underrepresentation Behind the Camera Persists
Athletes Win Historic Title IX Settlement with Clemson University
Creating Cultures of Consent: Teaching and Modeling Consent for the Next Generation