Victims Must Not Be Lost in Domestic Violence and Policing Debates - Ms. Magazine
Skip to content

California Governor Newsom just signed a bill expanding the legal definition of domestic violence to include “coercive control”: series of behaviors that attempt to deprive another of “free will and personal liberty.”

If this year is about exposing hard truths, here’s another: We have too easily outsourced our domestic violence problem. Instead of responding and taking a stand in our families and communities, we have, over time relegated it to police and government systems.

Leading up to this October’s Domestic Violence Awareness Month, there has on the one hand already been necessary attention to the pandemic’s disastrous, and worsening effects of domestic violence.

On the other hand, debates rage in light of the racial justice movement: How does “defund the police” envision responding to domestic violence, currently the single largest category of calls received by police?

Working with victims, survivors, advocates and experts over 17 years, I carry countless stories of police chauvinism and racism in response to survivors—even too many cases of victims being arrested or even incarcerated.

But I also hold stories of women and children who attribute their lives and wellness to police who responded to very dangerous situations when no one else would. To me this hardly proves there are “few bad apples” in law enforcement. It does prove that not all domestic violence is the same; not all victimized by domestic violence are identical, not even all within a certain race or ethnicity (some in fact don’t even prefer the label “survivor” that was preached when I first started this work). One size fits only one.

That’s precisely why when it comes to policing domestic violence, it’s not all or nothing. Policing is not the answer. “Community” is not the answer either. Victim-survivors need and demand several combinations, to have an expanded set of options from which to freely choose.

And many of those closest to domestic violence survivors—their crisis counselors and advocates—have for long already been employing exactly such creative combinations. They have trained to offer many options and to accept different choices.

Not all abuse is the same. Abuse runs the gamut from coercive control, to battering, to murder. Every day, on helplines across the country, advocates—crisis counselors, shelter workers, therapists, lawyers—support people in assessing the dangerousness of the abuse they are facing. We know the only experts about the lethality of a situation are the victim-survivors themselves.

Heavily armed—often with a doomsday arsenal—abusive men are unfortunately not uncommon. But also the slight, meek-seeming, well-employed, privileged abusive person may well be more murderous than someone who more fully performs hypermasculinity. After all, even a few seconds of pressure to someone’s neck—colloquially “choking”—can cause brain injury if not death. We believe someone when they say they fear they will be killed.

Not all victims are alike. One in four women in this country have experienced victimization by an intimate partner. Clearly, every fourth woman in this country is not alike: in privilege, in preference, in personality. Not even all victims within any racial or ethnic group are identical.

Fully knowing the legal system often doesn’t do justice and its pace is consistently out-of-step with the pace of trauma recovery, some will choose a long and hard fight, employing the police and the courts.

The notion that this is a choice only by “rich, white women” is false. It makes invisible the immigrant woman who tells me that she didn’t flee one lawless country to settle for no semblance of justice in this one. It dismisses the woman who is convinced that only the threat of greater violence will curb her partner’s threat. It ignores the many women who have none of the “community,” often promised as the alternative to policing.

Not all community responses are alike or preferred. Ten years ago I co-founded a community-based organization, Sikh Family Center, the only organization focused on gendered violence in the Sikh American population. We have had strangers step up and provide shelter; friends pack courts during emotional hearings; elders have simple but essential conversations: “I know what’s happening, I’ll keep checking on her daily, and I will come over if I suspect you’ve hurt her again.”

There is a lot of beauty in these responses: They are not only individual interventions; they propel the culture change to prevent domestic violence in the first place.

A prominent non-Sikh family lawyer took one of our complicated cases pro bono a few years ago, waving aside the money we had raised for representation: She was stunned by the community’s support for a stranger on a cross-country run from her abusive husband. Within our community often marginalized—especially post 9/11, for its turbaned and bearded men—this white attorney realized there was much progressiveness to be celebrated. Like other community organizations, ours too seeks to cultivate what’s best in the community.

Yet, at the same time, we wrestle with the reality of community members who conspire with the abusive person because of their family ties; their economic worth; or other shared experience—at times as shamefully simple as “she’s complaining about what every wife goes through.”

We have also grappled with the community members unable to comprehend how even after all the help and support they extended, she has not left an abusive situation. And community members who make it impossible (psychologically, emotionally, even physically) for a survivor to seek safety, within the relationship or outside of it.

Our experience at Sikh Family Center is not unique. On the condition of anonymity the director of a large women of color organization told me this month:

“The only people thinking this is the answer, have not tried engaging the community on domestic violence. Even the most well-meaning folks have little staying power in these long and complicated and often dangerous scenarios.”

It was in the context of an even more intractable and apologist community—with much lesser support for abuse victims—that feminists of the 1970s did push for increased police response to domestic violence. They have repeatedly been rebuked for this in recent months. But anyone familiar with countries that still have the near-zero police response to gender violence that the U.S. had then is hard pressed to agree the 1970s movement a “failure.” And the movement was eventually effectively coopted, with the Violence Against Women Act prioritizing 85 percent of the dollars to policing and punishing.

But the feminists championing the movement and “survivors” were not entirely separate categories. They have never been, in the anti-violence movement.

The movement in the 2020s now needs to take heed from survivors, including those being victimized today. They cannot be asked to curtail their choices, even endanger their lives—even for the urgent purpose of correcting the U.S. police and prison complex.

Not all police response should be alike. Making the response more scenario-specific is essential. This nuance can only be provided through knowledge from community and advocates. And the labor lent by advocates cannot be undervalued: It should cost the police, not be built into their budgets. The faces of George Floyd, Breonna Taylor, Trayvon Martin—and indeed generations of unnamed, and certainly unfilmed, Black people murdered before them—make it difficult again to propose more “training” and “reform” for the policing system that is racist in its origin and praxis.

Yet, the faces of the many endangered and embattled women also make it impossible to propose we never call on police. When a person is in a deathly rage, ready to kill their partner, there are few community members who will stand in the way. When we are living in a world where it is apparently too  hard for too many to wear a weightless face mask for the health of others (as well as their selves), it requires little imagination to forecast bystander action in the face of brutality against someone else. Broken police and prison systems are the result of a broken social contract.

The social contract will take time to repair. That doesn’t mean we stop trying. But in the meantime, if we as a society are going to continue outsourcing our domestic violence problem, let’s do so to those trained and committed to standing with survivors, no matter what choices they make, no matter how many times they change their minds.

Shifting a few percentage points of massive police budgets would better equip advocates and boost the social services they provide to those victimized. If that is still too large an ask, the feminists will keep marching, for everyone’s liberty.

Mallika Kaur is a writer, lawyer and organizer who focuses on gender and minority issues in the United States and South Asia and teaches at UC Berkeley School of Law. She is the author of “Faith, Gender, and Activism in the Punjab Conflict: The Wheat Fields Still Whisper,” Palgrave MacMillan (2019). 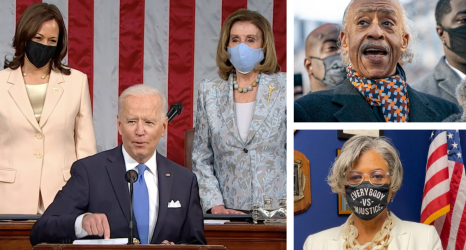