War on Women Report: The Instability of Roe; How Low Vaccination Rates Affect Women; Marijuana and the Olympics - Ms. Magazine
Skip to content

The War on Women was in full force under the Trump administration. But despite a transition of administration, the War on Women is still seeping into federal, state and local legislation and attempting to reverse important progressive policies. While the battle may look different, we are staying vigilant in our goals to dismantle patriarchy at every turn. The fight is far from over. We are watching.

+ Disgraced comedian and actor Bill Cosby was released from jail after the Pennsylvania Supreme Court overturned his 2018 conviction on charges of drugging and sexually assaulting Andrea Constand in 2004, citing violations of his due process rights.

Cosby, who has been the subject of highly publicized accusations of rape, drug-facilitated sexual assault, sexual battery, child sexual abuse and sexual misconduct against more than 50 women, was one of the first cases to show us that famous and influential men could be held accountable. This abrupt reversal, especially in light of the #MeToo movement, raises questions regarding future prosecution he could face over any of the other dozens of accusations against him.

Sexual abuse of prisoners by correctional officers is far too common, and only became protected in 2003 with the passage of the Prison Rape Elimination Act (PREA). “Correctional Officers wield great power in correctional facilities,” said Zachary Shroyer, a special agent and investigator on this case. “Klinger abused his authority to engage in sexual relations with two inmates. Sexual abuse of inmates will never be tolerated.”

+ America’s pop icon, Britney Spears, was denied her request to be removed from her father’s abusive conservatorship, following Spears’s testimony that she wishes to bring an end to the conservatorship that has controlled her life, health and finances for the past 13 years. This conservatorship is an abuse of both power and justice, as Spears shared that her conservators refused to allow her to remove her IUD (intrauterine device), stating in court:

“I have an IUD inside of myself right now so I don’t get pregnant. I wanted to take the IUD out so I could start trying to have another baby. But this so-called team won’t let me go to the doctor to take it out because they don’t want me to have children—any more children.”

Conservatorships are far more common than one might think—Spears’s situation mirrors the reality for millions of people with disabilities who are deprived of legal capacity and are placed under some form of guardianship, which often leads to a range of abuses. Spears does not deserve this treatment, nor do the millions of other people living under guardianships across the world.

+ Sha’Carri Richardson, a favorite for the women’s 100-meter race after winning gold in the Oregon trials last month, won’t run at the Toyko Olympics after testing positive for marijuana. Following The United States Anti-Doping Agency announcement of the positive test, Richardson credited the positive test to her use of marijuana as a way to cope with the unexpected death of her biological mother while she was at the Olympic trials.

Richardson’s win was ground-breaking not only for herself but for the Olympics, as well as future generations of Black female athletes. It seems, through the stories of Black women barred from competition due to naturally high testosterone levels, Black swimmers banned from using specially-designed swim caps for their hair, and many see this attack on Sha’carri Richardson as anti-Black, especially anti-Black-women.

+ The Biden administration has fallen short—by millions—of meeting their July 4 vaccination goal. As of July 4, 48 percent of the U.S. population is fully vaccinated, compared to the goal of 70 percent. As vaccination incentives start to die down, such as free child care while getting vaccinated, it is becoming apparent that this issue, while a global health issue, is also a women’s issue—women are getting vaccinated at a significantly higher rate than men. Additionally, this is a partisan issue as shown through a recent national poll by KFF, demonstrating that 29 percent of Republicans and just 5 percent of Democrats said they definitely would not get the shot.

+ As the Supreme Court prepares to review Mississippi’s stringent restrictions on abortion—putting Roe v. Wade under its roughest stress test yet—underground abortion activists around the country are being called to action. With this case slated to be among the first heard in the next court session beginning in October, this decision is ever-important particularly in light of the “abortionpocalyse” we have seen this year, with a wave of red-state restrictions on procedures to terminate pregnancies. This underground abortion crew, emerging from their homes to the streets as we approach post-pandemic life, is prepared to confront a post-Roe America, providing pills and services even if the Supreme Court approves state-level bans.

About Marty Garbarini and Khira Hickbottom

Marty Garbarini is an editorial fellow at Ms. A senior at Smith College, she studies government and public policy as well as the study of women and gender. Marty is particularly interested in the rights of incarcerated women and prison abolition, as well as election coverage and the workings of the U.S. Government. In her free time, Marty could sing you any Broadway ballad or make you a mean friendship bracelet.
Khira Hickbottom is an editorial fellow with Ms. magazine and a rising junior student at Tulane University studying English and Africana Studies. Additionally, she is also presently interning at Birthmark Doula Collective doing research surrounding emergency preparedness for infant feeding. Khira loves roller skating, dill pickle chips, and bad reality television. 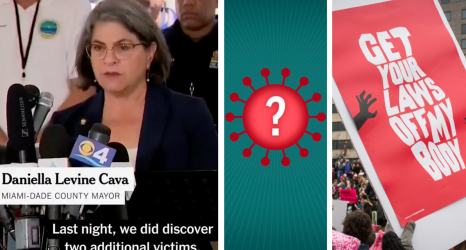