The anti-feminist Independent Women’s Forum has masterminded the GOP’s so-called “Bill of Rights” for women.

In late May, the GOP Study Committee, the largest group of right-wing lawmakers on the Hill, introduced a so-called “Women’s Bill of Rights” (WBOR) in the House. Far from a comprehensive plan to promote gender equity, the bill does not affirm any rights for women other than the “right” for cisgender women to exclude transgender women from gender-affirming spaces.

The WBOR’s co-sponsor is the 501(c)(3) Independent Women’s Forum (IWF) and its 501(c)(4) action arm, the Independent Women’s Voice (IWV), which have long opposed the Equal Rights Amendment, paid family and medical leave, and countless other measures that would improve the lives of millions of American women and girls.

IWF and IWV members have weaponized their identities as women to push for the dismantling of Title IX, a federal law that transformed the lives of women and girls by prohibiting gender discrimination in federally funded educational programs and institutions.

Before IWF/V tried to deploy Title IX—which is 50 years old this month—as a weapon against trans women, they sought to eliminate it.

IWF/V are dark money groups deeply embedded in the right-wing political infrastructure and ostensibly function as a right-wing propaganda engine for its funders. They have financial ties to the libertarian oil mogul Charles Koch and the dark money umbrella of far-right lawyer Leonard Leo, who has helped stack the Supreme Court with judges hand-picked for their anti-choice and anti-corporate regulation agenda.

Billionaire Dick DeVos sponsored IWF/V’s 2019 gala, where his wife—former education secretary and destroyer of Title IX’s rules to help survivors of sexual assault—Betsy Devos received IWF’s made-up “Woman of Valor” award. It is unsurprising then that IWF/V backed Betsy DeVos’ alteration of Title IX while she was education secretary to give more protections to those accused of sexually assaulting their classmates.

IWF has an established record of siding with alleged perpetrators of sexual violence over survivors. IWF was created by women defending Clarence Thomas against the sworn testimony by Anita Hill of his sexual overtures toward her when he was her boss, which he infamously denied. They also defended Bill Cosby, whom 60 women accused of sexual assault.

And while the majority of American women disapproved of the confirmation of Brett Kavanaugh to the Supreme Court, IWF/V spent a substantial amount of undisclosed money to help force Kavanaugh onto the Court despite eyewitness testimony that he had assaulted Dr. Christine Blasey Ford and documentary evidence that he had repeatedly lied under oath.

Additionally, IWF staffers seemingly focused their efforts on discrediting Blasey Ford, suggesting her accusations against Kavanaugh were “a publicity stunt” and that she “has a credibility problem.”

In addition to its long history of opposing Title IX, IWF has a record of attacking women athletes.

For example, it filed an amicus brief through its Independent Women’s Law Center (IWLC) in support of the U.S. Soccer Federation, the defendant in the U.S. Women’s National Team’s (USWNT) lawsuit fighting to end pay discrimination that resulted in the world champion UWSNT being paid less than the men’s soccer team.

Earlier this year, the federation settled the equal pay lawsuit for $24 million in back pay and just announced a collective bargaining agreement that creates true pay equity in the sport, a historic resolution that IWF criticized as being unfair to the men’s soccer team.

It appears “fairness” in women’s sports is only necessary, to IWF, when serving a larger anti-trans right-wing political strategy. For example, it has repeatedly targeted Lia Thomas, a transgender collegiate athlete, who they claim “unfairly” competes on the women’s swim team.

Erin Hawley, who aids IWF’s new IWLC and who is married to Senator Josh Hawley (R-Mo.), has also written against transgender women participating in women’s sports. She has made pseudo-feminist claims that trans-inclusive language and policies erase cisgender women. She also helped coordinate amicus briefs in support of Mississippi in the Dobbs v. Jackson Women’s Health Organization case that is likely to overturn Roe this year, on behalf of another right-wing group, the Alliance Defending Freedom (ADF), which the Southern Poverty Law Center has identified as an anti-LGBTQ hate group.

ADF has reportedly helped coordinate anti-trans legislation in Idaho that bars transgender athletes from playing on teams that do not correspond with their sex recorded at birth, regardless of their gender.

IWF/V’s newest legislative invention, WBOR, seeks to restrict the definition of womanhood at the expense of transgender women and could potentially lead to the policing of all women’s bodies.

They are contriving culture wars around womanhood as part of a broader and seemingly coordinated right-wing strategy fixated on anti-trans scaremongering. The hostility of IWF and other right-wing transphobes, including politicians like Governors Greg Abbott (R-Texas) and Ron DeSantis (R-Fla.), has no doubt contributed to the spike in suicidal ideation among trans youth.

2021 marked an onslaught of proposed anti-trans legislation by right-wing politicians, and these efforts have only intensified in 2022. IWF’s so-called “Bill of Rights” for women omits provisions to secure equality, like the ERA, while using the rhetoric of rights to erase protections for transgender and non-binary people.

It is seemingly another benefit to IWF that the bill on its face presents its organization as protecting the well-being of women, while effectively doing nothing to advance the interests of even the cisgender women it claims to help.

Ansev Demirhan is a research fellow at True North Research. She is trained as an intersectional feminist historian. Ansev received her Ph.D. in history from UNC-Chapel Hill in 2020. Her research interests include the Muslim woman question, feminist activism and global intellectual history. 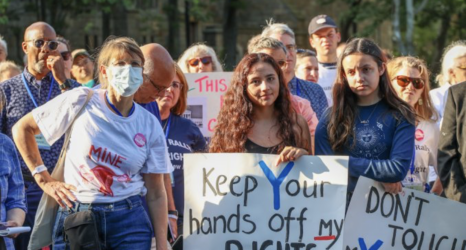