What Was So Great About the 1950s? - Ms. Magazine
Skip to content 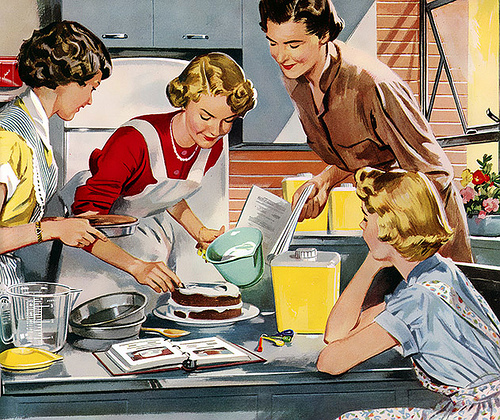 The late 1940s and early 1950s tend to be remembered in the popular imagination as a time of virtue: The United States emerged from the second World War as a victorious nation and an economic leader on the global stage. American families were enjoying a new sense of affluence (and profligacy)–they were stronger than ever because they enjoyed a moral purity that was unique to the United States, or so the story goes.

These were the “good old days” whose popular images of husbands mowing lawns, wives vacuuming in high heels and white children playing with the family dog have been emblazoned on the American consciousness. But what was life really like in the early Cold War period?

Researchers like Miriam Reumann, Elaine Tyler May, and others have suggested that beneath America’s veneer of moral triumph lay deep-seated anxieties surrounding shifting gender roles, economic uncertainties and racial tensions. Fears of “sexual chaos,” in particular, became the preoccupation of choice for many psychiatrists and physicians–as well as politicians, who worried that a breakdown in sexual morality would lead to a breakdown in the delicate social fabric of the United States.

In reality, it was known that Americans had been engaging in sexually “deviant” practices for decades: In a 1920 survey of American college girls, 92 percent reported that they engaged in “petting,” and nearly one half of young women were having pre-marital sex, historian Stephanie Coontz writes in Marriage: A History. However, sexual “deviance” took on new meaning in the immediate aftermath of World War II, as sexual promiscuity became conflated with moral weaknesses and was thus considered to be an indicator of vulnerability to the contaminating forces of Soviet communism.

Several experts began to hold up “traditional,” heterosexual marriage as a gold standard, a moral ideal that could liberate Americans from their own sexual decadence. As the psychiatrist Dr. Frank S. Caprio suggested in The Sexually Adequate Male:

In a normal marriage, no wife actually wants to dominate her husband. She prefers to be married to a husband whom she can respect, who is mature, who assumes the necessary responsibilities of family life, and is considerate of her opinions in arriving at important decisions.

This idea that “normal” families were those with heterosexual, married partners who enjoyed their gender roles became common knowledge among physicians, journalists and others in the 1950s and beyond.

The problem with this seemingly common-sense idea that families were “good,” strong, or authentically American “back in the day” is that this idea persists as a means by which conservative leaders today are able to re-script ideas about how “good” American men and women should really be behaving. That is, if we passively believe that American families were in fact strongest when fathers brought home the bacon and women stayed home with the children then we will use “common sense” logic to dismiss feminists as “anti-family,” or gay marriage as antithetical to “traditional” American family values.

So let’s resist the “normalcy” trap and interrogate these cultural truths that are taken for granted. We can start with a critical investigation into the past: What was life like in the 1950s? And why do we believe in the “good old days”?