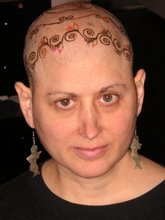 Chicago writer Sandi Wisenberg calls herself “The Cancer Bitch.”  But after reading her recent memoir, based on her blog by that name, I wouldn’t call her a bitch; she’s just really, really observant.

Like when recounting, in her book The Adventures of Cancer Bitch, her interview by a nervous medical student in an early hospital visit:

I said, in explanation, I have fibroids. Oh, he said, I’m one of three boys. Pause. He mumbled: What did you say?

And when she describes herself, mostly self-deprecatingly, her eye is keen:

Cancer Bitch has never waxed anything, including floors and furniture, though in her youth she bleached her mustache and arm hairs. Now she doesn’t have to because Adriamycin and Taxol have left her hair-depleted.

Sandi, now 54 and in remission, made the most of her losing her signature curly, full, wild dark hair to chemo in 2007. When she was bald, she turned her head into a canvas; on her scalp, artist friends painted elegant black swirls in black jagua ink, along with the message, “U.S. Out of Iraq.”

Sandi’s memoir is the latest in an increasingly established genre of “sick lit”–books using humor to expose and cope with the absurdities of the illness experience. Last month, I heard her characterize this movement on a panel she organized (and which I participated in) at the mammoth annual conference of the Association of Writers and Writing Programs in Denver. Sandi, who also writes often on Jewish culture and co-directs Northwestern University’s MA/MFA in Creative Writing Program, is also the author of two other books.

With the help of the other panelists, she compiled a helpful list on her website of “sick humor” books.  (It turns out that a great number are on breast cancer, a foundation of the genre.) This humorous body of work shows a progression of not only being able to talk about this traditionally stigmatized and intensely private disease in public, but also being able to reflect the many layers of the experience as women truly live it.

As Sandi mentioned in her opening panel presentation, feminist writer Audre Lorde was a pioneer in the genre in 1980 with The Cancer Journals, whose opening pages serve as a manifesto for memoirists “to recognize that imposed silence about any area of our lives is a tool for separation and powerlessness.”  I realized that when I first read this fiercely political and poetic book years ago I had totally missed Lorde’s touches of dark humor, such as when she writes how a nurse scolded her for not wearing her prosthetic, telling her it’s “bad for the morale of the office.”

But it wasn’t until 1992 when what Sandi described as “the first really funny breast cancer memoir” was published. That was Joyce Wadler‘s  My Breast: One Woman’s Cancer  Story. A favorite author of Sandi’s is Miriam Engelberg, author of the 2006 bestselling memoir, Cancer Made me a Shallower Person.  Hers was part of a later wave of books that was a comic backlash against the “easy sentiment” of earlier cancer memoirs, which seemed like they always had to end on a happy note.

The other panelists that morning also described how humor serves in our  memoirs about illness (well reported by another blogger in the audience). Marya Hornbacker, the author most recently of Madness: A Bipolar Life, said humor is part of her concept of “radical acceptance” to live with the impossible:

It is through humor that we gain a sense of ownership of the experience rather than feeling trapped and controlled by a mind out of control.

Blogger William Bradley, our token male, recognized, “I’ve lived a life so full of joy and laughter, to not include laughter would be to misrepresent my life and my self.” And feminist author Regina Barreca, who quoted from a past column, “A Womb with a View,” about her hysterectomy, summed it all up:

Illness is not a gift. Do you know what a gift is? Earrings.