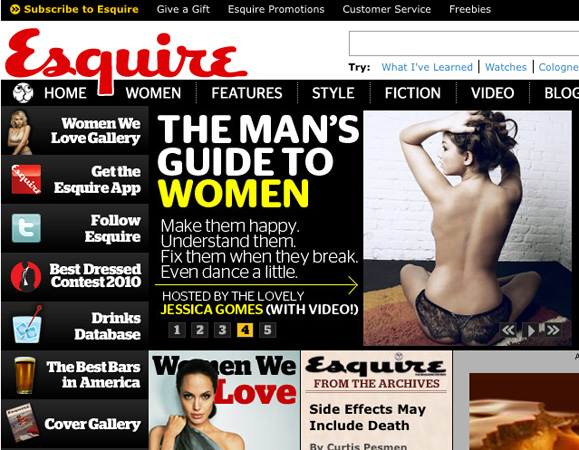 For anyone who has a hard time understanding women, Esquire has devoted their entire May issue to helping readers figure them out. The issue includes “1,000 Things You Don’t Know About Women” and “The Esquire Survey of the American Woman,” as well as “A Man’s Guide to Women,” with advice on how to slow dance, make a pretty woman laugh, be unnaturally patient, and create a sick nest for an under-the-weather wife or girlfriend.

Much of the issue’s content comes from women–perhaps  Esquire’s attempt at gaining credibility. One notable piece, “5 Moments in the Life of Women,” used input  from women that  seemed surprisingly genuine. Photographs of 60 women–12 each at ages 18, 27, 35, 44, and 53–were accompanied by bits of insight into their lives at their respective ages. The feature is flawed because of its blatant omission of any women 54 years of age or older–apparently even cougars have an age limit–but the portrayal of those still young enough to capture the Esquire Man’s interest contained more substance and authenticity than I would have expected.

When Esquire lets women speak for themselves, it works. It’s when Esquire tries to speak for women that it gets into trouble. When the magazine translates “the language of women” and explains the “real” meaning of questions like “Is that what you’re wearing?”, or conducts a survey of women that includes questions like “Can you parallel park?”, “Can you change the oil in a car?” and “Are you satisfied with the size of your breasts?”, it relies on tired stereotypes that are neither interesting or enlightening. It also betrays a primary interest in understanding women as complements to men.

These cliches are rooted in the idea that men are from Mars and women are from Venus. As Esquire editor David Granger put it in his Letter from the Editor,  “What the hell do we know about women?” He goes on to say:

Men and women are not the same. We are separated both by the deterministic traits of the XX and the XY chromosomes and, later, by cultural and educational influences. There’s so much we just will never understand about one another.

As evidence of this essential difference, the Editor cites his wife’s and daughters’ ritual of watching HBO’s Big Love together, with a reverence that remains to him a mystery. I can actually relate to him here, as I never could get into Big Love myself. My friend Paul is the only person I know who watches it. He also listens to Lil Wayne and Vanessa Carlton, has a subscription to Maxim and tears up during Modern Family. Am I blowing your mind, Granger?

The point is, gender predicts far less about a person than Esquire’s editor would have us believe. Women and men don’t come from two different planets. People are complicated and have to be understood as individuals. Sure, it can be fun to dissect men’s and women’s unique perspectives, but sometimes we learn more about one another by exploring the things we have in common rather than the things that we don’t. Readers  looking to “know about” women might consider the words of one of Esquire’s “75 Greatest Women of All Time,” Gloria Steinem, who in a recent interview was asked what women’s greatest strength was.

Her answer was, simply, “That they are human beings.”