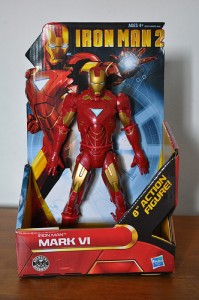 It’s right there in the title: Iron MAN, not meaning “human” but male. As I sat watching the movie with my 13-year-old son (and cringing at the overt sexualization of females), I realized that Iron Man 2 is about the glory of males, the fact they are indeed “iron” and that, with their strength and ingenuity, the world will be saved.

A number of other significant gender lessons are imparted in the film.

First, on men and masculinity:

1. Men don’t cry, they scream, as Ivan (played by Mickey Rourke) does when his dad dies.

2. Men like power tools, technology, welding and weapons. Talking, not so much.

3. Men are big wheels and lone gunmen. They may say, “It’s not all about me,” as Tony Stark (played by Robert Downey, Jr.) does at the beginning of the film, but, really, it is.

4. Men need to leave a legacy and build a better future. The best way to do this is via weapons, wealth and womanizing

5. Men’s hatred of women is cute and humorous–or as one blogger puts it, “Tony Stark’s privileged sexist playboy antics are hilarious,” teaching viewers that “Men’s sexism is funny and endearing, as is their greed.”

6. Men are fabulous at business–so fabulous that they can successfully privatize world peace.

8. Men will always need to be in the theatre of war. As such, they might as well turn their bodies into weapons.

9. In fact, the male body is a weapon. Literally, figuratively, metaphorically. Man is iron. Or, as Andrew O’Hehir‘s naming of the Iron Man suit as “impenetrable iron-dong costume” in his Salon review suggests, the iron suit allows for the fulfillment of the male body not only as weapon but as walking erection–hard and ready all the time.

Secondly, on females and femininity (these lessons are longer, you see, because females need a lot of teaching):

1. Women are for dancing, either around poles or on stage as props. Wherever they are dancing, they should be scantily clad. Note to cameraman: Shoot women dancers from behind so as to get maximum amount of booty shots, as in the opening scene of Iron Man 2 where our gaze is directed to numerous bent-over butts in red spandex hot pants. As O’Herir points out in his Salon review, there is “no irony” in these “loving, loop-the-loop tracking shots of these dancin’ hoochie-mamas with their spray-bronzed legs and perfect Spandex asses.” Rather it is, as this blogger aptly names it, “a vomit-inducingly sexist scene involving various swooping close-ups of womens’ body parts as they gyrate.”

2. Women are objects. When Tony is shown his new car, he makes a joke about the woman standing next to the vehicle: “Does she come with the car?” In other words, women, like cars, should be sleek, good looking, fast and expendable. Tony assesses new female character Natalie Rushman (Scarlett Johansson) using the same parameters: Her intelligence, multi-lingual skills and martial arts training don’t seem to matter; he uses Google to find her old modeling pictures. As Froley of ReelThinker notes, she is put “in her underwear just for the hell of it” and her character is no more than a “near-cameo.” This incites Froley to assume that director “Jon Favreau must be some kind of chauvinist dog, because he takes every opportunity to objectify women.”

3. Women need to have good make-up know-how. Both Stark’s assistant Pepper Potts (Gwyneth Paltrow) and Natalie are not only beautifully made-up themselves, but also have the skills to mask Tony’s various bumps and bruises with foundation. This skill, along with their ability to take precarious, mincing steps on incredibly high heels, frames femininity as a performance that benefits males.

4. Women’s most important asset is their bodies. Even when they are in full-on battle mode, they should remain hyper-vigilant about their bodily display. They don’t get to wear “iron man” suits, but really tight body suits. What fun would it be if their boobs and butts were hidden under metal?

5. Women are petty and jealous. Make fun of their jealousy by telling them “green doesn’t look good on you,” as Tony says to Pepper when his ogling of Natalie is obviously bothering her.

6. The female body is weak. Pepper, after being saved by Tony near the end of Iron Man 2, says “I quit…My body can’t take this stress.” After two hours of watching Tony’s body take bullets, bombs, electric shocks and poisoning, we hear that poor Pepper can’t take the stress–of being a CEO for a week.

7. Women are very forgiving. Ignore her, lie to her, bring her the one food she is allergic to as a gift and make it known that you are a lifelong womanizer: None of that will matter as long as you kiss her at the right moment. Or, as Kyle Smith gleefully notes, “The Gwyneth Paltrow character is comfortable with being Tony Stark’s assistant instead of judo-chopping and blasting away at bad guys herself, in the somewhat silly manner of virtually every female lead in action movies these days.” Yes, it’s soooo silly when we act as if females want to be part of the action! As one blogger put it, “If I were Gwyneth Paltrow and I just played the role of a stiletto-heel-wearing submissive secretary cleaning up after some rich white chauvinist asshole, I’d send back my Oscar.”

Finally, the film provides lessons in racism and homophobia:

1. Tony Stark explains his desire to no longer making weapons with, “I saw Americans killed by my own weapons in Afghanistan! I can’t put it better than this blogger: “Do I even need to mention how stupid and racist it is to say that he was OK with his weapons being used to kill all those other non-Americans?” In this same vein, as noted in my earlier post, various Others are framed as “evil terrorists,” namely Middle Easterners and North Koreans.

3. Organizations which discriminate against homosexuals deserve huge donations. In the sequel, Tony donates a modern art collection, which Pepper has collected over 10 years, to the Boy Scouts of America.

Bonus note: The sexist message of the Iron Man films spills off the screen and into our fast-food culture, with Burger King offering “four lifestyle accessories for girls and four action-packed toys for boys.” Girls, get busy accessorizing! Boys, take action!

For this feminist, one thing’s certain: I won’t be stepping out in my non-high heels in order to see the sure-to-follow Iron Man 3.