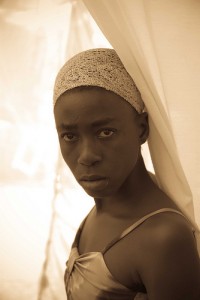 During National Health Week, we might take a few moments to think about health issues of women beyond U.S. borders–such as in Haiti, where I’m stationed with the U.N. humanitarian response. As residents of the poorest nation in the Western hemisphere, women in Haiti have always struggled with health concerns, and those have only been exacerbated by the devastating earthquake. I find that my work to end violence against women–specifically sexual violence–is connected with the state of the health sector.

For survivors of sexual violence, certain free services, including free medications, need to be in place. Women first need access to medical care, and then to the police, should they elect to report the crime. They also need to be directed to other necessary services such as counseling and psychosocial support. In Haitian clinics, we try to ensure that medical facilities provide post-exposure prophylaxis (PEP) to prevent HIV; emergency contraception; prophylaxis and treatment for sexually transmitted infections (STIs); vaccinations for such diseases as Hepatitis B and tetanus; and treatment for basic wounds. The ingredients for these treatments exist in very few clinics, but nearly 50 “post-rape kits” were distributed around the country by the U.N., each kit serving 50 people. But obtaining PEP and emergency contraception–the key contents of the United Nations post-rape kit–remains contentious.

The National Action Plan to Combat Violence Against Women in Haiti clearly states that a national protocol is in place for the treatment of survivors of sexual violence, including specific ways to obtain the contents of a post-rape kit. Various combinations of medication can be used for emergency contraception, and are available locally; however, the national protocol says that contraception should be procured in local pharmacies and not in post-rape kits. Also, some necessary ingredients in the post-rape kit are not the same as those medications recommended in the national protocol, such as different antibiotics for STI treatment.

In post-earthquake Haiti, it has been difficult to reconcile this protocol with the reality that women need support immediately and that many pharmacies are no longer standing or are unable to procure necessary supplies. But we are now past  the immediate-emergency phase, so we need to look at sustainable options and support the longterm recovery of the Haitian health system. Our current challenge is to respect the national protocol while ensuring that survivors of gender-based violence obtain the best possible care.

And so, we continue to provide women survivors of sexual violence with access to services while also finding creative ways to prevent sexual violence from occurring. The kits are a small obstacle, compared to the myriad other challenges women face, but they certainly can have a huge impact on the lives of sexual-violence survivors.