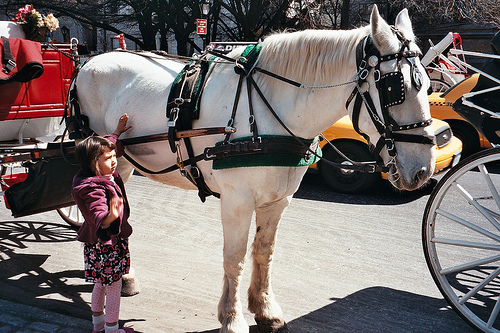 “If the New York City Council can pass a bill mandating that carriage horses deserve two days of rest per week, we can certainly do better for the domestic workers of this state,” declares Diane Savino, sponsor in the New York State Senate of a pending Domestic Workers Bill of Rights.

Private household workers are still excluded from some of the most important labor laws, such as the National Labor Relations Act, which means that they do not have the right to legally form unions. Even though they are entitled to unemployment compensation and Social Security, employers often don’t pay the required taxes.  The vast majority of domestic workers are poor women of color. Many are immigrants who are not fluent in English and may be undocumented.  Because of their vulnerability, workers find themselves powerless and subject to abuse.

The current New York Domestic Worker Bill of Rights has been six years in the making.  Stalled in committee during previous legislative sessions, the bill has passed the Assembly and has a real chance of passing the Senate, and Governor David Paterson has indicated that he would sign the bill into law.  If passed, it would be the first of its kind in the nation and a model for rectifying long-standing injustices to one of our country’s most valuable–and vulnerable–sectors of the workforce.

The Bill of Rights would offer a much-needed layer of protection and a statewide set of standards for domestic workers. It would enable them to take a day off with pay when ill, ensure that they get advance notice of termination or severance pay, provide them with paid vacation and holidays as well as overtime pay and guarantee them one day off each week. Not as much as the carriage horses in New York. But with the passage of the Bill of Rights, we will be one step closer to treating the women who care for and keep safe our most precious possessions–our children–as well as we treat the horses who parade tourists through the scenic streets of New York.