Where Are the Women Comedy Writers on Late-Night TV? - Ms. Magazine
Skip to content 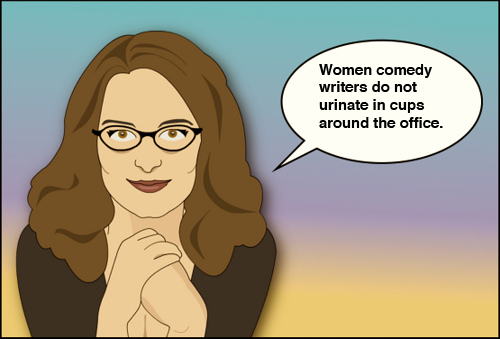 I was expecting horror tales of discrimination and sexist exclusion when I attended a gathering  of some of the most talented women late-night TV writers in New York City last week. Instead, what I heard was that there just aren’t enough funny women submitting material and applying for comedy writing positions.

That late-night comedy is a largely male dominated field is widely known. But all of the panelists–Ann Cohen (Best Week Ever), Jill Goodwin (The Late Show With David Letterman), Hallie Haglund (The Daily Show with Jon Stewart), Morgan Murphy (Late Night with Jimmy Fallon) and Meredith Scardino (The Colbert Report), plus moderator Allison Silverman (The Colbert Report, The Daily Show with Jon Stewart and Late Night with Conan O’Brien)–downplayed sexist explanations for the gender gap. Said Cohen:

It’s the ability and desire to write material for others that limits the pool of writers, whether they’re women or men.

Scardino contradicted the assumption that comedy writing is full of hostile men:

There’s not that much testosterone in the writing room, the men I work with are very sensitive.

On the other hand, she can’t help but notice she’s the only woman writer on her show:

I can come up with ideas that are too girly that won’t resonate with Colbert, and I have to deal with jokes that constantly reference Star Wars and comics I haven’t read. 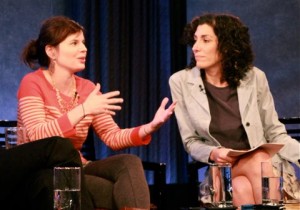 Haglund was the only one of the writers who gathered at The Paley Center for Media under the auspices of the Writers Guild of America East who recounted having trouble making fun of certain women. While on the Daily Show staff during the ’08 campaign, she had a hard time hearing some of the jokes about Hillary Clinton:

Looking at the clips of her as the only woman with all those men, I felt it mirrored my own position as a lone woman among men and it was hard not to take the punches on her personally.

Whether or not men are socialized more than women into being funny was debated as a possible explanation of the low rate of women aspiring to the comedy-writing profession. Scardino weighed in:

When boys hang out together they make fun of and heckle each other in a way that’s training them for comedy. Girls are definitely a bit more supportive.

Ditto for Haglund, who described life in the writing room:

For me it feels like I’m at work pitching jokes, but for men it seems to feel like they’re with their friends.

I would liked to have seen more discussion of the social structures behind the low rates of female comedy-writing applicants, and an extended dialogue about the fact that the majority of late-night hosts are men, which obviously impacts the number of women on their writing staffs. It’s also easy for traditionalists to hold on to the belief that women aren’t as funny as men when the official representatives for comedy–all those late-night hosts–are overwhelmingly men. More spotlight needs to be shown on the hilarious women writers and performers that are out there; and then, hopefully, we’ll see a woman holding down a late-nightly spot on the air as well.

Above: Illustration of Tina Fey. Quote from her interview in Esquire. Photo courtesy of http://www.flickr.com/photos/[email protected]/ / CC BY 2.0. Photo of Scardino and Silverman by Yvesmarie Vilain, courtesy of Writers Guild of America East.